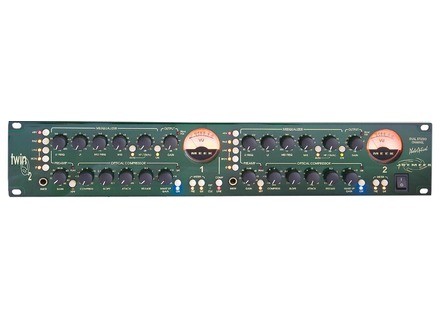 Joemeek TwinQ2
4
EDIT EDIT
This review refers to the Twinq version 1. I wrote due to the demand of an Audiofanzine member, but he must know that I had version 2.

Insert possibility on the rear.

It's a classic console channel strip. The pots inspire confidence, it's solid and I love green.

The line inputs are a real plus, considering that I use Joemeek mainly during mixdown, to eq and compress groups (drums, guitars)

The preamp itself is not the heart of the unit, but rather the EQ and the compressor, which add some color, if you can say so. It's the only hardware unit I have to mix, but I prefer it over my many plug-ins.

It's really good as a DI for a bass or even a guitar. I use the Iron button systematically in this context.

Two years of use.
I don't have that much experience in the hardware world, I'm more used to software.

I love its sturdiness, the brutality of the compressor, the precision of the EQ, the AD converter.
I don't like it being big and heavy because I record sound on the move and I don't like to process sound during recording. The preamp section, while fully satisfying, isn't much better than an RME or even my Steinberg ur824 soundcard.

I noticed that its price dropped substantially after its successor came out. I recommend you to get one secondhand and I also suggest people who have it to keep it because, in my view, its successor (the Twinq2) doesn't add anything new.

Bottom line: I recommend it as a DI for studio or at home, as outboard gear to mix, but not to be transported in a case.
Did you find this review helpful?yesno
»

Easy to use...Yes and no. Yes, when you have basic notions of how this type of unit works, especially the compressor (the rest is quite intuitive). No, when you have never used an optical compressor and you don't know how to set the gain level, which can mess up everything. The unit is indeed refined and quite sensitive to the settings, so you need to do things in the right order. Once you have made yourself acquainted with it, it's great.

In relation to V1, which I had during a long time and resold to get some money, this one is more natural and wider. It's not like they are night and day, but it doesn't color sound that much and allows you to record acoustic guitars in a cleaner way, for example, without imposing on them that '70s color that the V1 (and even more the old-school version) provides as soon as you send a signal through it. This is a real clean and transparent channel strip, very musical, it's rich like an old console, which is a real delight. The EQ is truly excellent.

I used V1 for 4 years and I loved it. V2 is even better and at this price point, it's exceptional. I received it this morning and was thrilled to play with the knobs and test it on my amp, acoustic guitar, my vocals, a darbuka, with different mics, SM57, SM7B, the small jm27 that came with it (not that bad, despite what I had read about it) and its bigger sibling JM37, Rode M3 and NT3, Beta 58A, SE Electronic Z5600A, and it always sounded fine. It would sound clean or not, depending on the settings, but it's 100% musical. PMI had the 'intention of making JoeMeek mixers... I'm eagerly awaiting for a 24 or 32 channel one. If not, I'll go for a Toft Audio, which, even if it doesn't have the same sound signature, it has clearly the same spirit.
Did you find this review helpful?yesno
»