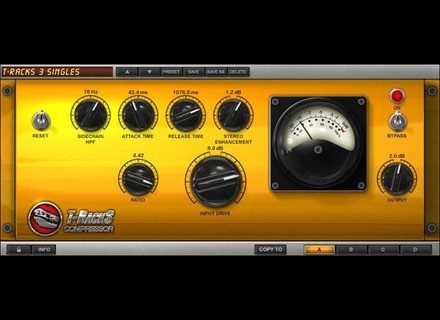 IK Multimedia Classic T-Racks Compressor
4
IK Multimedia's Classic T-Racks Compressor is a plug-in that comes with the T-Racks 3 mastering suite. It is modeled after the older T-Racks processors that were found in T-Racks 2 and earlier. You can buy this plug-in either individually or within T-Racks 3, but I'd highly recommend getting it within the full software suite. Installing T-Racks 3 as a whole was easy enough, as the whole process only took a short while, so installing just this plug-in should be even quicker in theory, but I haven't ever had to do it since I got it with T-Racks 3. The interface of the plug-in has parameters for input drive, (compression) ratio, a high pass filter, attack and release time, stereo enhancement, and output level. As you'll be able to tell within a few minutes of using this, it's a versatile plug-in that is capable of getting a wide array of different compression sounds. I've never had a need to check out the manual for this plug-in, but I don't think that there is one for it individually outside of the T-Racks 3 manual, although I'm not sure on this.

I'm currently running the the IK Multimedia Classic T-Racks Compressor and T-Racks 3 on a Mac Book Pro that has a 2.2 Ghz Intel Core 2 Duo processor and 4 GB of RAM. I've run the plug-in primarily in T-Racks 3 for mastering, but I've also used it as an RTAS plug-in in Pro Tools 7 & 8 for mixing purposes. The plug-in definitely takes up more processing power than your average plug-in, but it should be okay to run a bunch of them at a time as long as you have a strong system.

The IK Multimedia Classic T-Racks Compressor isn't my favorite plug-in in the T-Racks 3 mastering suite software and plug-in bundle, but it's still a great plug-in to have around. I think that they really just set the bar high with the other plug-ins, so the 'Classic' ones don't seem as good, but they're still very strong plug-ins. I'd highly encourage those interested in this plug-in and T-Racks 3 to buy the full software instead of buying this plug-in individually, as the price per plug-in makes it really worth it to buy the whole software. Plus you get to use T-Racks as standalone software which is really useful. Either way this is a very good plug-in to have, but if you are going to buy one of them individually, I'd recommend first going with one of the other compressor or limiter plug-ins in T-Racks 3 before getting this one.
Did you find this review helpful?yesno
»

A shower of offers at IK Multimedia

Published on 10/28/13
For Halloween, IK Multimedia is running several promotions on its iOS apps, AmpliTube 3 for Mac/PC and adds a third library to is group buy.