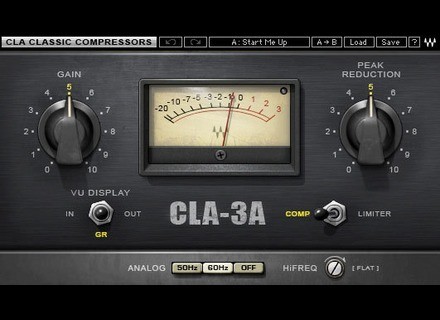 CLA-3A, Software compressor from Waves in the CLA series.

View all offers for Waves CLA-3A »

Waves CLA-3A
4
This is Waves' second plugin in the line of their three main famous compressors out there. This one is modeled after the famous '70s solid state compressors that were much more transparent than the tube counterparts. Because of that, this one tends to work a bit better on guitars and vocals than the CLA-2A. The compressor itself is fairly easy to use as it only has a Gain knob, Reduction knob, a switch to select between limiting/compression and some buttons to introduce some of that characteristic hum that was associated with these units.

Waves plugins are pretty well renowned in the business as being some of the most stable and popular plugins in the audio world. For one, they're cross platform. That means Mac users like me can use pretty much every single one of their plugins without a problem. Granted, they run at 32 bit instead of 64 bit, but Logic kindly provides a nice application that allows them to run without harming the 64 bit environment. I've never once experienced a crash that was directly correlated with inserting a Waves plugin on a buss. They're extremely stable, and I can't say enough about them. The biggest issue would be the overall cost as they cost a ton of money. I've never read the manual, so I can't really comment on that. These plugins are super easy, and the only main hurdle is figuring out what the names mean.

This compressor is a lot better for guitars and vocals because it's much more transparent. On the other hand, you kind of lose that famous tube sound that those compressors had. It's all a trade off, so you really have to experiment and see what's best for the mix you're currently mixing. If you ever get the chance to check out some of these Waves plugins, I highly recommend giving them a go. There's a good reason why they cost so much. Also, please don't support piracy.
Did you find this review helpful?yesno
»

Waves CLA-3A
4
The Waves Ltd. CLA-3A is a compression plug-in modeled after the classic Universal Audio LA-3A and present in the Waves Classic Compressors bundle. The CLA part of the name stands for Chris Lord Alge, the famed engineer and mixer who I guess was involved with designing and testing out these plug-ins. The CLA-3A in particular is a cool little plug-in with a really simple make up. Just like the hardware LA-3A, it's got parameters for gain and peak reduction, along with VU metering for either input, output, or gain reduction levels depending on how you set it. You also have the option of using the CLA-3A as either a compressor or limiter. The plug-in is available in all formats including for both Mac and PC and in either RTAS/TDM, VST, or AU plug-in formats. Installing the bundle was a breeze as it's as simple as installing any software out there. A manual shouldn't be necessary as this is as easy as it gets when it comes to using compression.

I've ran the Waves Ltd. CLA-3A on a few different systems, but not only until recently did I have it running on my home system. I've ran it on two different Pro Tools HD systems at professional studios, but right now at home I'm running it in Pro Tools LE 8. I run it on a Mac Book Pro that has a 2.2 Ghz Intel Core 2 Duo processor and 4 GB of RAM. I'm running Pro Tools with a Digi 002 rack version or a Digidesign Micro Box depending on if I'm at home or on the go. Within this configuration I haven't had any performance issues running the plug-in, as I can run a few of them at a time without a problem.

I like using the Waves Ltd. CLA-3A as it gives me a familiar interface to work with, even if it doesn't sound quite like a real LA-3A. If you're expecting this, you're expecting too much. However, the plug-in is a nice compressor in it's own right even if it doesn't live up to it's name. It's great for guitars and drums I find, although there are definitely other compressors in my plug-in suite that I'll look to before this one. In fact, while it's comparable in sound quality to the other plug-ins in the Classic Compressors bundle, it's probably not my favorite of the bunch. You can't buy this plug-in on it's own, so if you're interested you'll have to be looking at the full Classic Compressor bundle or the Waves Complete bundle. Either way, the CLA-3A is definitely a plug-in worth knowing about and trying whenever possible for you.

Published on 02/11/16
Waves has launched a one-day offer on its LA-3A compressor emulation.