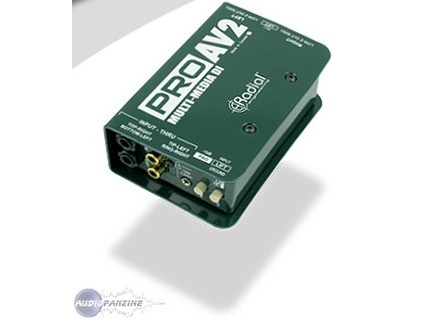 V old man on the hill's review (This content has been automatically translated from French)" The box in question!"

Radial Engineering ProAV2
5
Radial Pro AV2 is a double passive DI (so no 48v supply) conceived for multimedia.
Multimedia in the sense Radial and sound guys to hear means everything does not deliver a balanced mic level signal.
The input connector is complete with two 6.35 jack, two RCA and mini jack.
The purpose of the maneuver being symmetrical via two XLR outputs most of the stereo signals. Synthesizers, computers, MPC, CD players, iPod etc. ...
The chassis of the DI canadiene brand iréprochable. A glance at the interior is not bad, on the contrary, it reassures.

Pro AV2 is also a box solution, because of its input connections, it avoids lugging number of hacks generally of poor quality. -15 Db pad and ground lift and its inputs and outputs can be adapted to the acoustic environment.

It is also great over at Radial. Both processors work wonderfully and make all the warmth and directness of an analog synth. I have connected, recently bass and electro-acoustic on this unique ID and the two musicians were filled to beyond their expectations.
However, I prefer my other Radial J48 to treat the low especially when they are passive.
DI depends on the sound source, and if the latter is good no worries thanks to the Pro AV2 sound will be revealed, without coloring or compression.
And when the sound is poor, such as in the case of an MP3 source, the Radial not added to a metallization of its narrow.

I work on stage and this is my experience talking. I've never been satisfied with the indestructible Bss Ar 133 a sonically and when Radial began to point his nose on most of the Professional configurations, I admit I was impressed.
To return to the model in question, the hackneyed expression Swiss knife sondier him like a glove.