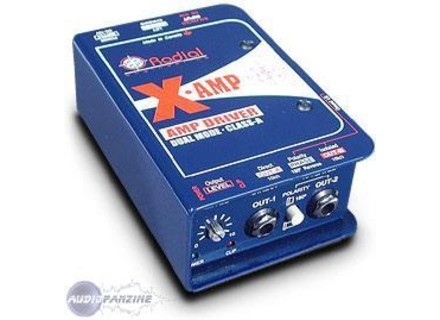 Radial Engineering X-Amp (Discontinued)
5
The Radial Engineering X-Amp is a unique box that allows for easy re-amping.  If you're unfamiliar, re-amping is the process of sending a pre-recorded track to an amplifier and re-recording the new signal from the amplifier.  This is a great technique which can come in quite handy if you need to add some new life to your already recorded guitar track, but can't or don't want to redo the part entirely.  As far as the make up of this box goes, it has an XLR input, and 1/4" connections for two outputs - both isolated and direct.  The unit also has a level knob, a polarity button, and a ground lift button.  It isn't in rack mountable form...

Setting up and using the Radial Engineering X-Amp is a pretty easy thing to do overall.  Nothing about making the connections is hard, but if you have no experience with things of this nature I'd recommend having the manual around.  There aren't too many parameters that you need to know about, but the polarity and ground lift definitely come in handy more often than not.  I love using the X-Amp because it makes re-amping that much easier...

The Radial Engineering X-Amp is made up of all class A circuits and won't color your sound in anyway.  This doesn't really make any tones of its own, but simply transports the sound of your original track to your amplifier without having to make any crazy connections.  It emits your signal clearly and cleanly, making sure that you aren't losing any information along the way at all.

While most home studio owners probably don't do too much re-amping, if you feel like it is something that you might want to do, or a professional who already does it a good deal, the Radial Engineering X-Amp will definitely be a friend of yours.  Re-amping is a great technique and is also one that can often be tricky if you don't have the right set up for it.  X-Amp eliminates any worries with making these connections, and while not the cheapest box out there, with the Radial Engineering name on it, you know you're getting a product that is built to last for a long time.  X-Amp is definitely the way to go for all your re-amping needs.

thus allows the injected signal from your guitar making live playback via your DAW or other in a guitar preamp, amp pedals, etc..

easy to use, you just need to be properly wired box with your sound card and your guitar amp to be able to listen the result of your rhythmic and change in real time! once finding the desired result, you simply save your guitar amp via a microphone or directly output if available ...

I use it with the J48 and I was able to try long and the result is excellent since there is no difference between "normal" and the decision passed by the X-Amp!
the sounds of fingers, rubbing the open strings badly choked out as if we toyed live ...

I use it since 2009 with which we recorded three bands we liked the ease, speed and quality of work we have had in comparison with standard sockets!
I know that is case, but I think the competition also offers this type of material, and I think it is a product really necessary today for guitar recordings that allows us later to save different configuration RIG guitars without going through the record box!

riles's review (This content has been automatically translated from French)" X-Amp: it works."

Radial Engineering X-Amp (Discontinued)
5
X-amp is an accessory transforming a signal line symmetrical unbalanced instrument signal. It can connect the output of a soundcard or a mixer to a guitar amp or low by optimizing the signal / noise and the impulse response.

This is handy in several situations: 1) You record the direct sound of a guitar or bass, then, after registration, you try different amps and settings without forcing the musicians to play for hours time find the "right sound". 2) If you work alone, you may want to focus on interpretation, then after the sound, even remake a decision once you've found the sound. 3) In live recording, the microphone placed in front of the amp also captures the repisse all instruments nearby. But if you make a decision DI, you can reamplify thereafter in a quiet room without any repisse. 4) Try sending a MesaBoogie, or a Fender MusicMan throwing stuff in your sequencer: synths, loops, percussion, voice ...

To return to the X-amp: it's a compact format (DI) which connects the area with an adapter. Class A circuit, Jensen Transformer. Balanced input on XLR connector with ground-lift, 2 output jack on instrument, one with polarity reverse and ground-lift. Adjusting volume common to both outputs. Robust construction usual in Radial.

I bought the X-Amp kit with a DI J48. Everything was shipped in a plastic case ZebraCase.

Is very simple: you insert the X-amp between the sound card or mixer and amp. While the sequencer plays the track loop, playing with the amp settings, mic placement, etc.. And when you're happy with the result, it is recorded on a new track.
The 2 outputs for connecting two amps at the same time, I've never done.

For cons, the X-Amp is not one of those couples accessories "transmitter-receiver" that allows the guitarist to put in a room and his amp in another, connected by long Multicore studio. The X-amp takes input line level (around 1 volt), while most of the cases "issuer" provide a micro level (about 1 millivolt).

It is difficult to say in absolute terms, how the Bell X-amp. I offer 3 comparisons:
1) With or without X-Amp: the X-Amp improves things (you can leave at the nominal level of the sound card without saturating the amplifier).
2) Between live guitar in the amp and guitar through: J48 DI preamp converter converter Protools X-Amp: I notice a slight degradation of sound (less incisive attacks) when I go through the whole chain. But I would not say whether it is the fault of the X-amp or other link.
3) By analogy with DIS: the X-Amp uses the same technology DI J48, I could compare with many other DIs. The J48 sounds better than the BSS AR133 (rounded green DI most prevalent in the pros right now).

Anyway, even if in absolute terms it slightly degrades the sound, the reamplification optimizes a lot of issues much more significant on the outcome.

The X-Amp is solid, it does its job without being noticed. I do not ask him anything more. Radial thank you.