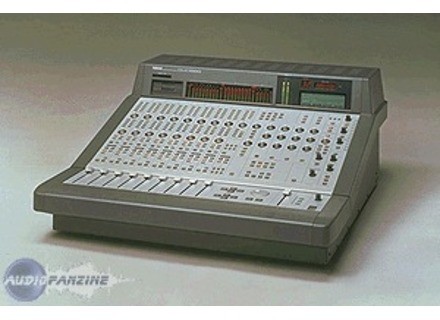 xav85's review (This content has been automatically translated from French)

* 4-band EQ paramtriques / tracks.
* Many internal effects (including reverb, delay, echo, flanger, etc ...) instead routable inputs Stereo 1 and 2 in-house. Effects completely parameter.
* Sampling of 20bit in between 44 freq; 48Khz. treatment on 28bits internally.
* Automation and registration of several scnes in internal memory and / or floppy disk.
* Possibility to cascade console 4 (1 master and 3 slaves).
* For other technical information ask me, I will add them here if ncessaire

Setup is simple, you just take time to understand and get used to the architecture and operation. If possible have all the folders in the console (maintenance manual, Schematic electronic and internal routing), it helps!
Manual in French.

The A / D input and Stereo D / A converters output AUX are transparent, there is no A / D converter on channels 1 8, so the quality dpendra external converters, same for the output bus and master.
Trs good momentum for a table of this age.

I use it for a year and a half, I admit that this table was first does a great unknown, CHRE buy it because "so-called down" while some son taient unplug s and the battery backup silent HS. In this regard, when the internal battery is HS the main program of use is lost, so it must be recharged (APRS changing the battery) to use the new console, the failure c'tait notes .
I use it with two converters Merging DUA II, a perfect duo!
Bought 380, trs trs good value qualitprix probably what I would do to make a choice deuxime parallle in the 1st.