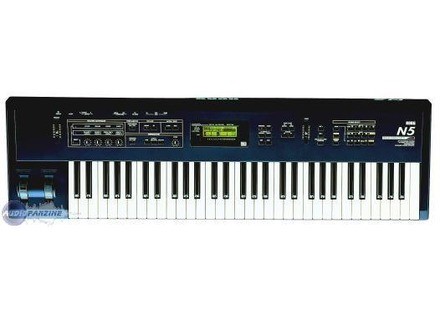 Korg N5
4
The Korg N5 is a pretty powerful synthesizer that you will love how simple it is to use. There are not special things about this board its pretty plain and cut and dry. With really good sounds on board and a basic interface its evident that they created this board just to make good music flat out. Nothing more or less.

Pretty easy to understand, all the knobs/ buttons are labeled and the screen is backlit . Reminds me a lot of the MPC 1000 screens. Pretty simple and easy to use. You will have no issues getting up and running with the Korg N5.

The sounds of the N5 are very good im my opinion. I really wasn’t a fan of the piano sounds though as they arent as good as they are on other Korg boards. But it comes with over 1000 sounds or presets so you will have plenty to mess with and keep you occupied for some time. The effects on this board are pretty good too, there arent a lot of them though, but if you are using an external mixer then you can add more effects after you are done.

Overall, not a bad board from Korg. Not the best board they have made and not the worse . It has a very professional sound and feel to it. You can get it up and running in no time. So with a good sound and easy to use how could you say no to it? Plus the price now is a lot cheaper than what it was when it first came out, these things fly for cheap online. Read a lot of reviews on it, most of its users pretty much feel the same way. I purchased it without even trying it out first so im sure you will like it too! Take a shot with this one!

bertoduchnord's review (This content has been automatically translated from French)" I love it!"

Korg N5
4
this is the first synth I bought and I have 5 years or maybe more, and it is really full! I made several recording studio, and he was always very faithful. It allows me to modulated sounds had my own way in the lives and is very easy to use!

accessibility of sounds and their handling is quite simple.

the sound quality is exellent! Some instruments such as drums or acoustic piano sounds are very realistic! It also contains a bank of sounds phenomenal!

for over 5 years I have not even explored all the sounds!

Qnt's review (This content has been automatically translated from French)

Korg N5
4
The KORG N5?
This is from the outset a good keyboard:

- Use request anyway to refer to the instructions from time to time. The few pots and
other features "live" are very useful (note the cutoff pots, attacks, ...) and
the arpeggio which is a plus with 20 styles and advanced configuration

- The edition of the sounds is pretty intuitive. It is immediately visually on the screen a different paramettres

- The interface "To host" is convenient for the tranfer via computer

- Sounds are very good as the SFX that acoustic
Found the synthesis of AI ² in KORG (good pianos!)

This month I'm getting the hands on.

As a general rule this j'aprécie Forsythe in all its forms!

Michael-David's review (This content has been automatically translated from French)

Korg N5
5
It's a synthesizer design rider, and evidently that is dedicated to electro, techno, dance and electronic music all the time. Korg adding controllers in real time, to give him some (apparent) simplicity.

A double jack 6.5 (left and right) for a small sound system and 3.5 for the stereo. Rather curious .. MIDI sustain pedals, everything is there.

A sound bank phnomnale! Over 1200 sounds! And not just any sounds since the N5 ahrit some of the best known sounds of its predecessors, namely M1 (the famous piano and ground) is the Wavestation sounds its volutes, the X3 for its acoustic sound and the 01 / W for its heavy tablecloths.

Gnrale simple configuration: several banks available, we choose, we Selects and we play!
An engine of synthesis concise but powerful enough, you can leave anything from low synthtiques like violins very, very crdibles. For the edition, it might be simple, except that certain manual Paramtres ncessitent. Same goes for effects, Korg never does a great simplicity in regard to the edition of its sounds, but leaning well over, it's OK!

Personally, despite his vocation electronics, it's a synth sounding the largest I've known (ethnic, dance, orchestral, rock, ambient, acoustic, etc) Nothing can stop him, you look you are!
However, a small BMOL for acoustic guitars or distortion, it is unclear how the outside of the guitar solo in a stadium, or else he dfend the property.
Good VLOC and playability, beefy unit despite the lightness you'll quickly get confidence on the machine. Aftertouch, portamento, it has everything to seduce.

No order in sound banks, everything is shuffled and you just have that sort, but there are so many that you'll quickly get bored and leave them as is.

I purchased for 150 euros a chance, but it is well worth the 300 euros, for these sounds for his edition. I do not know yet if we can CRER sound of A Z, but with what we have on hand, hard not to find a sound basis as existing.
I have a Roland XP-10 and he UNESCORecords well for these acoustic sounds irreproachable.

A choice again without hesitating, especially since it is not very common. If you need a broad synthesis of sounds as good as important, you found it and I have not found his equal!