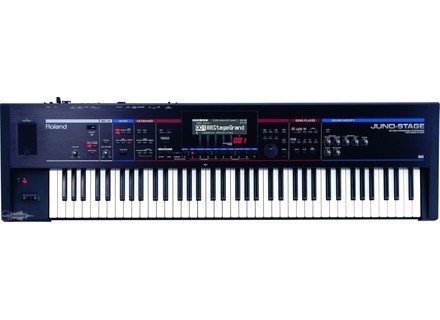 JUNO-Stage, Digital Synth from Roland in the Juno series.

Fredsi's review (This content has been automatically translated from French)

Roland JUNO-Stage
4
It is now about two months since I bought the Roland Juno Stage. I wanted to provide advan some time to give my opinion.

Reminder: The Roland Juno Stage is a keyboard of 76 keys for the stage (no sequeceur integrated, but the sequencer is available via a PC or Mac the Juno Stage-being that comes with CakeWalk. 128-voice polyphony, possibility to play MP3, WAV, AIFF (wma unrecognized unfortunately)

Pros:
- The price
- The number of keys (76): Very handy for not too large (88 keys is really too long to take it anywhere!) Or too small
- Sound (great sound of piano, Guitard, battery and other synthetic sounds from the Juno-G or Fantom.
- The possibility of repeating his songs group home for the USB key. (I recorded the songs in my group on my USB key and I play piano and over, very useful!)
- The weight (9.5 Kg, Honours)
-The option of favorites: We choose the sounds you want to use for a particular title on Spaces favorite of 1 to 10 then you have more than support for live and avoid typing a number and waste time. (In over 1000 sounds, it's mandatory!)

Cons:
- A great thing about Juno course: to recognize a microphone, add reverb, or special effects (such as a robot etc. ..). However, access to micro can not remain on the piano and the different sounds special microphone. Or I have not found ...
As a result, impossible to sing with all the synth sounds .. Annoying .. It means playing the piano, then you put a synth sound, for example, and presto, the microphone is off .. Too bad .. :-( So I plugged my microphone on a table as before ..
- Another problem is compatibility of MP3 or other sound from the USB key (I'll call the Roland support because I really do not understand): Here's my problem: During my repeated, I record my group to put the record on a memory USB power and repeat thereafter. I record in MP3 format with Nero on my laptop next to me. And then .. while the sounds are in MP3 format, my internship Juno does not recognize the format .. (As he recognizes them with other securities not registered with Nero) .. I then reopens wave editor, I converted the sound into WAV or AIFF; result, nothing to do, the Juno Stage does not recognize .. Very strange .. So for securities not recognized, I plugged my ipod on the keyboard and then it works fine, but hey, it's waiting for Roland enlighten me ...
- No recognition of WMA

My favorite sounds are (in addition to the piano which is great) battery, Guitard, the strings and some synth type sounds

Conclusion: Although I have some questions, I am very happy with my purchase. The Juno Stage is a great synth, my group is able to change very happy with my old synth, it really brings a plus. Very easy to use as a standard, fairly lightweight, it fits me perfectly.

Before buying I had seen this video quite well done: http://www.sonicstate.com/news/shownews.cfm?newsid=6788

for an example of battery
for a nice jam

for another example of his

Brief examples are not lacking

Now the name "Juno" is enough for me to marketing, this synth could have been called differently (even if some of the Juno G sounds are there, there are also sounds of the Fantom, the D5a or otherwise), but in any case for me is a beautiful machine!

Régis's review (This content has been automatically translated from French)

two soft drinks provided but one of them does not work correctly under vista yet. Well here is great is not the most interesting.
For the rest Roland knows better define its hardware

the mini jack for connecting a music player or other music source is frankly gadget.
The USB can be interesting, it is anyway a port on an external memory such material today, this support is not too expensive and may take a little longer. Being able to use it in reading. Wav may leave some voice solo on "scene" / cafe concert without investing in additional gear.
Personally I will not do here.

I find it really sucks to outsource the power supply on a pro-oriented material said scene! This simplifies the protection of electronics to remove the transformer certainly ...
here is a stain on the material hardening. But it was not a surprise since
clearly indicated.

we would have appreciated a SP / DIF out (Coax or Fiber) is likely as USB and interesting home studio.

This keyboard is oriented scene. So there lots of small details to better "live" on dark stage with him. The keys are lit by small LEDs integrated.
it is not too heavy, too bulky, and 76 keys.
time to boot is a bit long but it&#39;s not a windows

, it does not seem to go on a crash debug lol ...
Using a sequencer is fairly "complex" or rather complete many banks to call (patch mode). Especially since the instrument definition file (. Ins) was not available or if not totally wrong / incomplete date of purchase.
So I spent a few evenings draw in a file that works. It is available to your (MP).
He has yet to evolve a bit but it works and exploit 99% of the animal from a sequencer.
And finally I can play my favorite sequences and hear the quality of its sounds.

But I encounter some problems to assign banks (other than GM2). the sound does not match, or nothing comes out. Yet I&#39;m not a beginner in this field ... I have leaned heavily on this BIG problem!

The manual is clear, full as usual with Roland / Boss.

Config menus are not ergonomic. we try, we walk a little, but not for long. On the other hand there is not much to edit.
my firmware is 1.2 (December 2008)

Bought from DV247.fr (English site record-breaking price and within lib.) I&#39;m more satisfied with the product.
I noted in the doc to get the French on the web. but good in English here does too.

something here to have a tite idea http://media.roland.com/en/IT/JUNO-STAGE_IT/index.html

The sounds are varied and good bills. Largely exploited.
Brass / guitars are not up to all, finally I nitpick.

pianos, bass, organ, some brass and synth sounds are really great. realism is in Go.

The drum kits are quite excellent. They take the comparison to the DR880. a more realistic chouille for juno?

The effects are difficult to assign or change (reverb / chorus ...) for MIDI Sequencing

Otherwise, commme usual, there is not too "effect at roland that does not deceive his people by adding chorus and reverb to excess as in yam ...

Just the thing and when you cut the sound effects and well .... it is always as good ...

on the other hand I think the LEVEL patches varies from one sound to another, and suddenly, we are constantly trying to correct you to the master volume so as not to saturate ... When other totally saturate! !

The arpeggiator has models say disappointing.

2 ports SRX, and "option piano (a small piece of firmware embedded) can benefit from specific features sounds and piano SRX cards. Like the fantom. Very interesting.

a vocoder nice enough, so a microphone jack supporting the mic to condensateur.XLR 48v + avail.

I say again the volumes of general equilibrium between the sounds in my opinion is inconsistent. It is boring, and unacceptable at this price

I have a Roland SC88 (sold yesterday) because the sounds in this module exist in the juno stage, if they are not too advanced for some. But it was damn easy to control from a sequencer the SC88, to assign the bank / sound!

I have a psr8000 since its release in 97 or 96. the sounds of piano and brass / guitar were pretty good. they still hold the comparison. In fact it does not change that much in 12 years.
the touch is a little hard on the juno compared to psr8000, which suddenly has keys that seem smaller with a lower stroke

Through the roland D20 cons whose keyboard I dropped yesterday after 18 years (rubbers contact hs), it sounds like piano guitar .... they were really old, but not plies and soundtrack, and saw / lead synth

juno to return to training.

I like its sound, the 76-key keyboard. Too bad we can not enjoy sounds in performance mode patch mode from a sequencer, at least not always easy. if you put in patch mode, it is mono timbral and there was all the strength of the bank in front of us. multi timbral mode perf is good too but ....

I love this brand (1?), Speed ​​of access to their games from the keyboard (not from PC) and combinations of buttons to customize access. RBB, which allows some nice variations and patterns ... but it&#39;s still very rustic all here

The quality of the pots to change the resonance, attack ... fashionable groove box ..

I have not tried, I hesitated with the Korg M50 (but 61 more touches and Bontempi style)
I think.

a good value: a 76-key keyboard packed with cool sounds
with falling pianos and huge bass.

I was looking for a large (> 61tches) keyboard to the touch pro but not weighted, brand, with realistic sounds (Piano, E-Piano, organ, bass ...) it can make me a year without its 15n it cost me an arm and that its sounds are in the game.
its sounds are used in my compositions.
able to read my midi as faithfully as possible

Bought from DV247.fr (English site record-breaking price and within lib.) I&#39;m more satisfied with the product.
I noted in the doc to get the French on the web. but good in English here does too.

Published on 06/15/08
Roland announced several new products at the London International Music Show. Among others they unveiled the new GW-8 Workstation and the Juno in a stage version.

See all 167 photos of Roland JUNO-Stage »