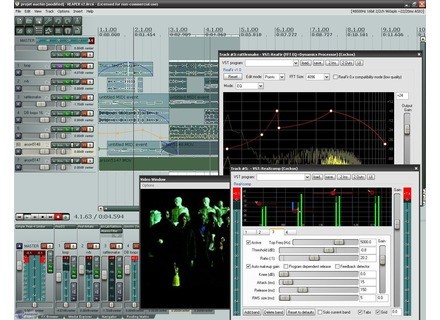 Reaper 2, General Sequencer from Cockos in the Reaper series.

Cockos Reaper 2
5
I realized I was using Cubase as an empty shell, a place to run plugins.
Reaper does it as well, or even better. You can route anything to anywhere.
I got tired of 4.7Gb installations. Reaper is like a 4mb zip file, and you can make it portable, running from a small usb drive.
I can teach and give it to interested people, with a nice collection of free plugins that are so common now on the web. And it's included plugins are really powerful.

But remember, you can use it without any restriction, but it's not really free, if it becomes an important tool you should pay the small amount they ask for it (I did, and I feel fine).

Tried it on 5 or 6 different computers, no problems at all.
With QuataFire 610, FastTrackPro, IndigoDJ or Asio4all, always perfect!!!
It is skinable, and it adapts to big or small screens, even on mini laptops.

As good as the big expensive sequencers, but small, portable, big user base and constantly updated.
I can use it as my main audio sequencer.
Did you find this review helpful?yesno
»

Cockos Reaper 2
5
This program is great! Just wanted to say that first. It installs with no problem. You can download the installer for free from Cockos' website. I had no compatibility issues with my system. The configuration goes fairly in depth, but if you don't care that much about optimizing your software perfectly, it doesn't need to get very complicated. The manual is provided digitally, and is extremely thorough. Even though this program is free, you are not getting short changed on the quality of the program and documentation.

I have my own custom built system. It's an intel motherboard and dual core processor, with 4GB of RAM and plenty of hard drive space. I also run Windows XP for my operating system. Reaper works great on my computer. It very rarely gets sluggish unless I am really using a ridiculous amount of plug-ins. Reaper itself has a small memory footprint, and seems to be coded very efficiently. It is also very stable. It does crash from time to time just like any audio program will, but it is a small amount when compared to some of its big name competitors.

I have been using Reaper for the past couple years when I switched away from Cakewalk's Sonar. Sonar was also great, but I felt that Reaper was just as good, and it's free! Obviously my favorite thing about it is the price, but the workflow and general layout design of the interface is very intuitive and easy to learn. It is also becoming more widely supported by third party plug-in developers as time goes. Beyond that, almost every VST plug-in I have tried to use with Reaper has worked, and in most cases when there is a problem, it is something that you can deal with like a graphical error. Cockos also includes some high quality plug-ins of their own design to get you started with a good collection if you are new to digital audio. The value is amazing, considering the price of $0. I plan to keep using Reaper for the foreseeable future.
Did you find this review helpful?yesno
»

Bluebox's review (This content has been automatically translated from French)" Pay less and make music!"

Cockos Reaper 2
4
Simple installation
Easy configuration. It quickly takes the shot when you have already worked on a DAW.
No incompatibility is even quite the opposite. Starting up for the first time an app such as Reaper and making music immediately with the publisher without any settings ... my time is bo!
Manual in french but a lot of tutorial in French when there are questions. Perfect.

The Reaper software is very stable. We feel a power down there that I have not felt in other DAW.

So ... it is very promising and I look forward to spending all my plugs in and prepare this app to work.

Using 3 hours. (Cubase SX3 before). The engine is a monster quality. It's just amazing to have at your disposal with a soft coding of such quality. The least? I can not find for the moment all the things that make you go very fast with SX3 or more but I think it should also work and prepare its own settings and buttons since Reaper allows so much.

For my part and after installation ... I have not even installed my sound card and MIDI. Nothing. After half an hour I had already composed a piece measures 32 "Dance" with more synth and drums. This is just a killer. Try to do this right after the installation of a Cu .... and we'll talk!

For me it is ok. I'm tired of spending all the time in the box then I will support this team and pay my product at the end of the month.

My son started playing music. I installed Reaper on his bike which is initially somewhat limited to music. I installed asio on his computer, a keyboard and Reaper + three plugin. After showing her some how to cope ... he had already made some cool drum tracks after spending some time on it. I said that he is not a musician at all. So if you want ...

Unbeatable value for money for the moment. In my opinion.

Cockos Reaper 2
4
system (64bit version) extremely simple and fast, very lightweight executable file.
The general setup is easy if you start from zero, we must remain simple and y'arriver not be compared to other DAW like CUBASE, which pollutes our gestures base.Simple habit.
Incompatible with my 32bit VSTi Arturia ProphetVS to 1.1 ... if everything works with all my vsti (PLAY 64bit, 64bit Independence, bestservice, etc ...)
The manual is clear but in English and requires a few hours of reading, it is huge.

my computer is simple CPU power (Core i3) and seems insufficient when I open 100 audio / midi, the fault was my cpu that blocks the side of real-time sequencer.
So in a normal session like 20 tracks (10 vsti for example) the Reaper is doing fine on my PC stuff.
With 12GB of RAM I can load banks eastwest complete. without concern for asio.
(FireWire400 external sound card presonus)

configuration is stable but suffers from some bug (rare. ..)

I use a 100% to turn the page with cubase which is no longer able to match it on all points.
I almost buy cubase 6.5 artist, to be disappointed (for the demo) by the lack of function offered as export multitrack audio impossible to do without buying the Premium version has more than 500 €
10fois Reaper is cheaper and does not care. QED!
Yet I was a fan of CUBASE since 15years ... and I realized that the so-called "tenor" do not care about their customers and take them for wallet on foot.
Reaper makes everything (breath control via micro) controlling parameters of a track from another track, as the side chain but more powerful, huge! timestretching same with the "varied audio" everything is, as a function of Melodyne, everything!
partoche except the editor.
The editor provides features twelve o'clock handy but I prefer that of cubas

REAPER will remain my choice for at least 10 years ... the time that other DAW take it seriously and resume his duties routing ultra-powerful.

Did you find this review helpful?yesno
»
Read the 22 user reviews on the Cockos Reaper 2 »

View all 3 videos of Cockos Reaper 2 »

Cockos Reaper 2 manuals and other files