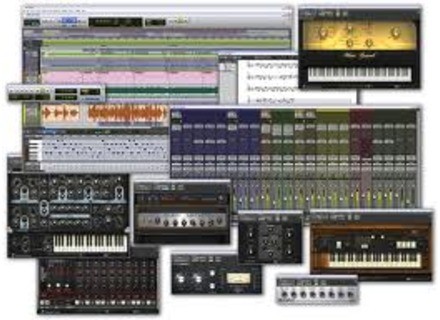 Linn Sondek's review (This content has been automatically translated from French)

Digidesign Pro Tools M-Powered 9
4
This software was provided bundled with M-Audio Fast Track Pro interface.
This is actually a Pro Tools 9, with very, very little about. What made this set, at the time an all in one in quality / performance / price ratio.
Installation is no problem, I-Lock key is provided simply create an account to validate your serial number and authorization.
No incompatibilities but few crashes due to the application of certain third-party plug-ins that require a reboot of the PC before restarting the MP9.

For general configuration of my PC, see my profile.
As I wrote, this Pro Tools MP9 is no one-price version of the famous sequencer Avid (as can be versions LE) but software that offers just about everything offered big brother Pro Tools 9 at a special price. Sure, it lacks the overall stability of the version to 600 €. But it is quite usable. Nevertheless, better make regular backups being recorded is sometimes capricious because its side can make it crash when closing ... But this is common sense.
In terms of numbers of tracks, virtual instruments, general routing mix and plugs in, I did not notice any difference with the "big release".

The MP9 has faithfully served me for two and a half years, until I hit a deal proposed by Thomann:. Avid Mbox Mini bundle with PT9 and free update to PT10 to 389 € While the operational stability and execution speed are infinitely superior PT10, it remains that MP9 is a very good software, easy to pick up for a neophyte, powerful, offering a large number of plug-in and instruments as well as a substantial amount of loops in all musical styles.
Performances are at the rendezvous and the sound quality of high-level and a simple "small" interface.
Did you find this review helpful?yesno
»