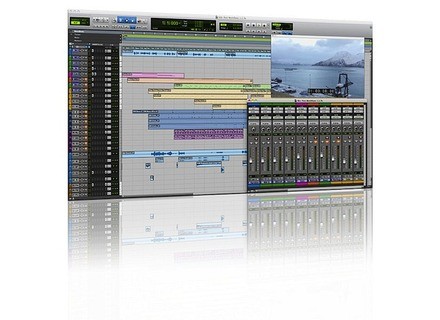 Digidesign Protools HD 9
5
Pro Tools has always been the leader in terms of DAW performance, and it's for good reason. Besides having some of the most stable hardware and some of the most famous plugins, it's also cross platform. That means that anybody can simply install this on their computer and give it a go. On top of that, Pro Tools HD 9 has a new feature that no other Pro Tools has had before it -- it is now compatible with any preamp out there. Yes, they finally took out the hardware restrictions in order to help market this to a wider audience. You no longer have to be tied to their proprietary hardware like you used to.

Pro Tools has always been pretty stable for me, for the most part. The biggest compatibility issues that can occur generally happen when you're dealing with aftermarket plugins and they need to be wrapped with different applications. That can sometimes cause some instability depending on what you're trying to achieve. However, Pro Tools generally has pretty good built-in plugins that you can use. Most of the major plugin manufacturers out there support RTAS anyway. There's no issues with it being a memory hog as long as you're not doing anything stupid. There is so much to do in here that it really does require reading the manual quite a few times to totally grasp it, but I find it more fun to simply play around in the environment and experiment.

Personally, I'm a Logic fan, but I'm a Mac user as well. Given that Pro Tools is a cross platform application with rock solid stability and some of the most intuitive environments out there, it's no wonder this is the number one DAW of choice. Thanks to Pro Tools 9 being hardware independent, now anybody can experience what the hype is about this application. I'm actually pondering making the permanent switch from Logic, but I haven't exactly made the leap yet.
Did you find this review helpful?yesno
»

Digidesign Protools HD 9
5
Installation&nbsp;without problem, no need to have an external box anymore. This one works. There is no problem with of "buffer size" &nbsp;(I miss it... actually it does not!) when you are not in latency mode. The manual is a bit brainy. Works fine on Snow Leopard.

I use it for several months. I have had Cubase, Protools 7, 8. The 9 is much better.
Did you find this review helpful?yesno
»

Digidesign Protools HD 9
4
Great sequencer, easy installation, but a little long when it installs, ie HEAT and Production toolkit. I give it a good score also because AVID open protools, with its native version which in the past was more closed, a prison door, so now it is possible to use the audio interface of his choice, something that is great, because in many cases you can get a better sound.

To rotate protools correctly, you need a PC or MAC, rather beefy computer, sequencer works, currently in 32 bits, minimum 3 GB of RAM with a quad core i7 or higher, the software is rather steady
if only one chooses the right settings, depending on the material.

almost three years, I have ssay about all its competitors, it is take and leave, but it is not for nothing that protools is used on half the planet. what I like most is the speed of editions, provided you know the keyboard shortcuts. What I like least are all ptites things it lacks compared to the competition, a shortcut or clip option gain would have been welcome, a real sample editor etc ....