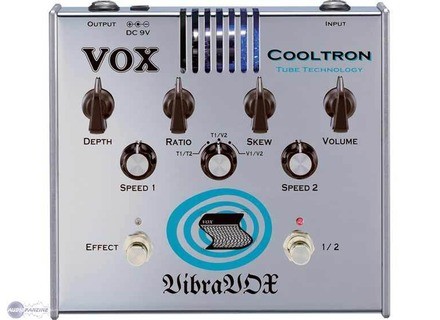 Vibra Vox, Tremolo/Vibrato for Guitar from Vox in the Cooltron series.

SanSystem's review (This content has been automatically translated from French)

Config simple, even if such opinions Previous, I just wish the knob for the common SETTING THE depth. 2 knobs and pedals that CTAIT perfection.
But nothing in agne use purely tremolo, which is my main use.

Is that the pedals makes the diffrence with a lot of other Tremolo I've experienced. The sound is simply ultra warm and deep. So I know if the lamp is (probably) or others, but it is a rgale.
Vibrato is a bonus and the same level.
Lacca foot 2-speed tremolo or vibrato is royal.
Some even use it with depth zero, that is not audible the tremolo effect, just to enjoy the warm grain it gives your sound.

I use it for a year now and it always surprises me as much.

The pros:
Clearly the quality of sound,
Rglages flexibility.
Vibrato and tremolo 2 in 1
2 speeds available up diffrent
Zero-noise
The quality and solidity of the pedals
The price given the benefits (and competition) is not CHRE.


In -
A compact
SETTING THE one depth

wesmontgo's review (This content has been automatically translated from French)

Trs simple: start first with the pedals on hand plutt that under the foot as there are opportunities rglages! V1/T2 the switch changes from a deep vibrato tremolo marks a more discreet, but you can find a compromise. Dj is the great extra but we are given, the more you want!

Excellent sound quality, adds body, even before an all-tube amp. Output to a speaker VOX 2x12 ", that glove. No noise, no background noise or change of level switches, neat.

Nothing wrong, it's high class, value qualitprix. Who likes these effects have not hsitation, even if you do not use them for everything (although slow trmolo can be used continuously, even in the Jazz-cf Scofield, Gabor Gado, etc. ...).

thierryvb's review (This content has been automatically translated from French)

Analogue tube type 12AU7 (ECC82)
According to the leaflet, Vox set out in the same system Vib / Trem installed on their AC30 amps to put it in a pedal

4 knobs common to two settings:
- "Depth": depth of the effect
- "Ratio": Increases the duration of the "hollow"
- "Skew" modifies the curve of the effect
- "Volume" sets the gain (in 2 / 3, the output level is about the same as the input level)

Loupiote a two-color flash at the same speed as the effect in the blue and red for tremolo vibrato, so leading off the coast of Hong Kong.

Small problem: too bad there have only one depth adjustment: less than bend down to turn the knob, the vibrato and tremolo have the same depth.

The Vibrato and Tremolo sound perfect.
The transition from one setting to another is gradual, which is quite nice to use: On stage, if you forget to change because the transition is as a letter in the mail, neither seen nor known nobody has seen anything, not even the friends of your string orchestra.

But this pedal does more than what is asked:
The sound is warm and becomes crunchy when you go up the gain. The lamp is fulfilling its role (it is not there just for show).
This is the brilliant sound you love when a mare in the digital!

This difference is obvious on a transistor amplifier: The sound is almost that of a tube amp.
The pedal will deserve to be in this case enclanchée time.

On my Fender tube, the difference is somewhat less clear.

The main advantages of this pedal are the grain provided by the lamp and the combination of two very good effects in one pedal.

Supperior well, in my opinion, the most common Vibratos and Tremolos.
I only regret that the depth setting is common to two effects.
I do not know if I'll keep it because I have a tremolo pedal that I love the "Mr Vibromatic" SIB! (Not found but fabulous).

Excellent quality / price ratio: two effects for the Price of 1 and 1 / 2 is less than two types of Boss pedals.
The more the lamp.