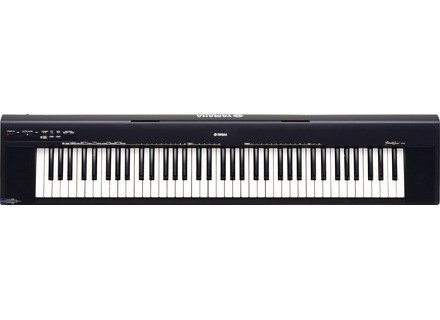 NP-30, Keyboard Arranger from Yamaha in the Piaggero series.

Yamaha NP-30
4
I bought this piano as a means to find out whether I liked piano playing. That meant it had to have a bare minimum of sound and feel resemblance of a real piano. Sound has to inspire, touch has to give you the ability to express yourself.
As for sound, the speakers are ridiculous, but the tones themselves are 'bare able' as you can find out with headphones. So that was ok.
Playable? Yes, and arguably for professional players as well I think. But now that I have this keyboard for a few years, I consider myself a novice, I find a lot cords, where your fingers get between the black keys, very difficult to play. And it has to do with the length of the keys, the pivotal point, which influences the attack. The closer you get to the end of the key it becomes heavy and very hard to play (for a beginner, a professional can pull through,as ever). This makes me look for a new piano now, because it really starts to annoy me. I'm not sure if hammer action technique cancels out this problem (which is basically a different technique altogether).
Still, for a beginner,I think a good choice, if you find out you don't like piano playing, no harm done.
Did you find this review helpful?yesno
»

I use it as a MIDI keyboard and I'm satisfied with it. It's light and can work with batteries. It's a good Midi keyboard and its price is unbeatable, at least to start playing piano without going broke...
Just be careful with the speakers, I wouldn't dare play in front of a knowledgeable audience with them :P Or even a normal public, for that matter :S I need to test it with external speakers.

I'd pass...with the built-in speakers, which make it sound "plasticky."

I use it with an external sound bank, and use it 100% for MIDI and with external speakers.
Did you find this review helpful?yesno
»

I really love the keyboard because it's halfway between a piano and a synth, meaning it's not as hard as a piano nor as soft as a synth.

The manual is clear and indispensable for the different functions accessed via key combinations (it has no LCD).

It couldn't be easier to use, apart from the key combinations, but you get used to them fast!

I chose it knowing it didn't have too many sounds, but they are enough for what I do (at least right now), especially since the sounds are okay. Good value for money.

The key action is fine and it can be adjusted.

The sounds are good and realistic, and if you add to them a sustain pedal and some reverb, they are very good! =D

My favorite sounds are: Grand piano and strings, and a mix of them both! =P
Did you find this review helpful?yesno
»

Yamaha NP-30
4
Keyboard with 76 keys that allows you to play different sampled instruments: 2 pianos, 2 harpsichords, 2 e-pianos (including a Rhodes or a similar sounding one), 2 organs, and a vibraphone.

Basic connections: 1 midi in, 1 midi out and a jack headphone output. You can also plug in a pedal.

The keyboard itself is pretty pleasant when you are used to entry-level synths and cheap MIDI controllers. The low keys are "heavier" than the high keys. Overall it's nice to play with it.

The manual is well done and it's indispensable, given the amount of settings (transpose, reverb...) that are accessed with key combinations.

The interface would've been better with more buttons per function, but you can nevertheless find your way, especially since the keyboard saves your settings.

It's weird, because the reviews I've read about its sounds are quite contradictory...

In my view, I think they are fine, generally speaking. There are obviously certain unusable instruments (the first e-piano and the awful violins), but the two acoustic pianos are expressive and the vibraphone sounds quite all right (it's an instrument that's very easy to sample since it doesn't have to many nuances that need to be taken into account).

The sound improves and gains warmth with a bit of reverb.

The keyboard has a built-in amplifier with two speakers (one on each side). It produces a sound that's all right to start out, but it's obvious that anybody that has an amp will eventually end up plugging it in.

The speakers add to the overall size of the keyboard, which, as a consequence, seems quite long!
Did you find this review helpful?yesno
»
Read the 13 user reviews on the Yamaha NP-30 »