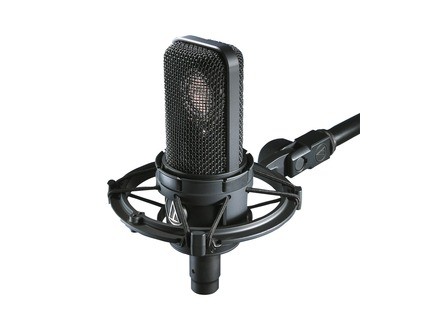 All user reviews for the Audio-Technica AT4040

Audio-Technica AT4040
5
The Audio Technica AT4040 condenser microphone is an excellent choice for studio recordings, great for vocals, acoustic guitars and overheads. It has a wide dynamic range and low noise (only 12dB of self- noise). Its high SPL capability captures every sound with detail and with a natural quality. It also is very affordable compared to similar condenser microphones in that price range like AKG or Rode, so If you're looking for a good home- studio condenser microphone this should be your first option. Even if you go to a professional studio you will definitely find one or two of this microphones around. I use it to record vocals, acoustic guitars (using two of them, one aiming at the neck of the guitar and the other at the body) and overheads, as well as percussion and even a chinese instrument I play called Hulusi, it has a radder odd (but beautiful) sound but it was smoothly captured by the AT4040. The recorded drums sounded amazingly clear and organic. One very important thing to keep in mind when recording with this microphone it's placement; its cardioid pattern and large diaphragm makes it very responsive to sound pressure at the extremes; it will capture from the smallest detail to the loudest hit with equal precision.
The AT4040 also features:
-Switchable 80Hz hi-pass filter
-10dB pad
-Cardioid pattern
-Frequency response of 20Hz-20kHz
-Signal to noise ratio of 82 dB
-Includes shock mount and case

What I like the most about this microphone is its versatility, clarity and smoothness, it is also very durable and solid built. As I stated before, this mic is perfect for vocals, acoustic instruments and overheads, however regarding lead vocals recording, it may not be the best choice for everyone; it feels a little bit bottom heavy and some voices may sound too deep, but this is easy to EQ out so it's not really a problem, what I'm just saying is that there are more suitable microphones for certain vocals; some voices have the upper midrange about 6-7 kHz but for some others this frequencies are more on their sibilance range, and vice versa. Also what I said earlier about placement is very important when recording vocals, in my band the singer can get very loud so when we were recording vocals we'd make him stand like 40-50 cm away from mic so the whole vocal range could be well captured with no clipping. I'm happy with the results, the vocals sound warm, crisp and full. Precision and quality of the sound are extraordinary for a microphone in that price range. Definitely would buy again. In conclusion:

Audio-Technica AT4040
4
The Audio-Technica AT4040 is a side address fixed cardioid studio condenser microphone that is touted as very consistent and very natural by Audio-Technica. It boasts a rather impressively low noise figure at only 12 dB of self-noise, and an equally impressive accompanying signal to noise ratio of 82 dB. Aside from that, it includes the expected 10 dB pad and the low end roll-off starting at 80 Hz that one would expect to find on most microphones of this caliber.

The AT4040 has a rather standard frequency response of 20-20,000 Hz. One look at the frequency response curve, however, and it is obvious what the Audio-Technica was trying to do when they were engineering this little bugger: tailor it for vocals. It has a rather significant bump at 6-7 kHz, a dip in the sibilance range from 8-10 kHz, and a nice boost of air right above 10 kHz. While when using it on my voice, it was a dream, this, unfortunately, can wreak havoc on the sound if it happens to be put in front of the wrong singer.

Why? All of these critical frequencies in the voice--upper midrange, sibilance, air--they are all next door neighbors to each other. On some voices, 6-7 kHz is in the upper midrange, but on others' voices, it is smack dab right in the middle of their sibilance zones. It also works the same way on the other end; perhaps boosting at 11-13 kHz or so may work on some voices, but some people have sibilance zones that go into this range. Essentially speaking, while this microphone can for the most part avoid harshness compared to many of the Chinese microphones that just seem to boost everything over 6 kHz, be prepared to find some bizarre sounds coming out of some vocalists.

But who said one microphone can be used by everyone? Not me.

The Audio-Technica AT4040 is a great little beast that will sound better than any of the lower end Chinese microphones on the market, but that's not saying much. It works very well on me, but there are vocalists it just should not be on. However, even if you place it on these unsuited voices, the results will still be much better than the "boost everything" mentality that the Chinese K67-type microphones push. It's always an upgrade from your MXL microphone, but certainly not always against its peers.
View price information
Did you find this review helpful?yesno

Audio-Technica AT4040
4
This is a large diaphragm condenser microphone from Audio-Technica. While not the most pristine name in the business, AT is getting known for their affordable, yet quality gear, and this mic is no exception. It's probably best used in the studio, or at the home studio, I wouldn't really try to use it in a live gig environment, as I'm not sure what you'd use for, and it's too delicate to use on most instruments at a concert hall. The mic has a 10db pad on it and needs phantom power to work.

I like this microphone, for the price it's really pretty awesome. As another reviewer mentioned, it's much better than most LDC mics in its price range as it doesn't have the harsh sound that those do. I like to use it at home more than in the actual studio, as the place I work has better mics than this. If I was going to use this microphone, I'd have to try it on acoustic guitars and as a room mic more than anything. I also liked it on piano, though I processed that sound quite a bit when I used it, so I don't know if it would have worked for me as well on its own. It can really be used on quite a bit of things, a leslie speaker for instance sounds great with this as long as its not placed too close, obviously. The pad does help quite a bit in extending its application. I don't like it on vocals, though, but that's fine, most mics don't work great on everything, at least not in this price range. It does work nicely on percussion, though.
This is a good choice for a home studio owner, as it's not too pricey and it'll get the job done well.
View price information
Did you find this review helpful?yesno

Audio-Technica AT4040
4
Here we have a nice large diaphragm condenser mic from Audio Technica. It connects with a standard XLR mic cable. It does require phantom power from your preamp to work. The mic comes in a nice padded box and also comes with an elastic mounted shock absorber. The mic has a 10dB pad switch. I should say that this mic has a really outstanding SPL capacity. You can stick this in front a really blaring guitar amp and this mic will be able to handle it with ease without breaking up. The 10dB only increases that great attribute. Also on this mic is a switchable low pass filter at 80hz, which can help you take care of any rumble.

I have been using a pair of these for a long time as drum room mics, and ambient mics for various other purposes. I personally find the transient response on these mics to be phenomenal despite the deceivingly low price tag. The sound overall is very rich and and full. You don't get that harsh, cheap sound that you get on many other large diaphragm condensers in this price range. The mic just has a very open sound to it that I feel lends itself very much to ambient recording. If you take a pair of these 20 feet away from your drum set, and then compress that stereo signal and blend it in with your close mics, you will have yourself a great drum sound without having to spend a lot on your ambient mics. They also fare pretty well on close miked vocals, though not as well as the more expensive condensers, since the high frequency response on this mic is not quite as sweet. For the price, you are getting a great condenser that will serve you well. I would get it again, it's a good value.
View price information
Did you find this review helpful?yesno

Danbei's review (This content has been automatically translated from French)

Audio-Technica AT4040
3
See the other reviews

The 4040 AT gives a sound a bit muffled, it puts everything into the background, so it seems good for instruments (guitar in my case) and secondary voices. on the other hand for the main voice, I struggled to make out, it is not very good at it.

I will not repeat this choice because I record mostly on main instrumental voice, so it is not the most suitable micro. It's still a good mic with a specific sound.

I use it for 3 years (the previous pair was stolen stereo ...), mainly couple at first, then gradually, and happily, for the live.
In overheads, excellent record in the studio but too sensitive for the live.
On a Leslie, a real treat!
On occasional solo (clarinet, accordion, vocals, violin ...), excellent record but again, a little too sensitive for the live (a KSM32 sounds a bit more neutral but gets less the rest of the orchestra).

soundbringer's review (This content has been automatically translated from French)" Micro superb!"

Audio-Technica AT4040
5
The AT4040 is a pearl for vocals or acoustic guitar, I also use it for overheads in pairs with a second AT4040. The sound is natural, transparent and slightly flattering to the voice with a slight boost on the curve at the mids.

More than 10 years after this purchase I am always delighted and I almost immediately bought a second.
Very useful and full of superb stereo sources. Good value for money.

Audio-Technica AT4040
4
everything has been said

I use it for years, occasionally.
Good mic for everything, the pad and low cut are very useful
very straight, very detailed, cold and surgical limits.
Beau med low, yet firm enough
c for the price very good.

Audio-Technica AT4040
4
Robust for making static vocals, guitars (electric and acoustic), Over Head ... in my case! may certainly be appropriate for other sources.

I've had it but I can feel the difference on the plugs that are clean and precise open.
it is an excellent value for money!

Romaintenin's review (This content has been automatically translated from French)" Versatile"

a microphone with a versatile value for money really top

advisable for beginners as semi pro.
View price information
Did you find this review helpful?yesno
Cookies help us improve performance, enhance user experience and deliver our services. By using our services, you agree to our use of cookies. Find out more.