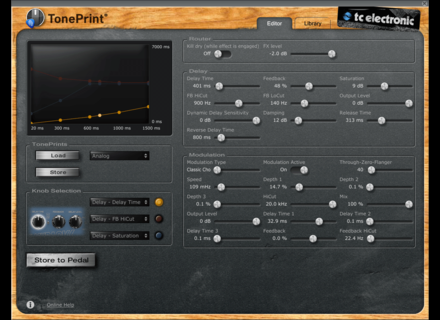 TonePrint Editor, Other Music Software from TC Electronic in the TonePrint series.

viper409's review (This content has been automatically translated from French)" Nice but ... Y has bugs!"

TC Electronic TonePrint Editor
2
Mac at least, the implementation is very simple. The tutorial is clear that we know a little bit about the. Well thought out interface overall. No ability to save presets.

I had to try several times to load some effects on my flashback x4 slap that such an effect was never charged. Some presets such as 2290 do not function outright (kind of effect to multiple delays) or are unmanageable. on the other hand, how to adjust the knobs act ... This is great! As well as the possibility of infinite settings.

I use it for 4 days and I still managed to concoct some effects that suit me but many corrections are made, including some effects do not work, the ability to save presets (I work with display screens ) seems essential. Unsuccessful but the idea is great.

The TonePrint Editor now can save presets

Published on 10/10/13
TC Electronic released a new version of its TonePrint Editor software for its TonePrint pedals, with two main new features.

The TC Electronic TonePrint Editor is out