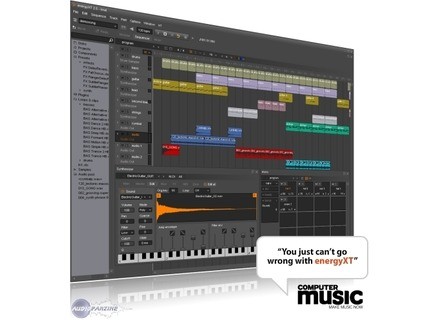 Surprising at first start: it is immediate.
on the other hand, when loading an existing project, you have the usual time startup plugs, AC seems normal.
For the rest no resource concerns on a Dell HT 3GHz XP SP2.

In recent months, energyXt has definitely replaced Cubase SX2 (except when I need a video track).
I tested Live, Traktion, Reaper, Sonar, Samplitude and whatnot, and Cubase SX used very intensively for several years.

- The virtual instruments are fully encapsulated allowing greater MIDI channel management flexibility, for example in a live situation more Midi keyboards and control surfaces (especially when using instrumentals that lack of Midi channel setting internally as the Zebra, for example)
- Management of Midi devices is ultra-simple (a small midilearn pad that does it all) and especially that keeps settings when changed the project (add-change tracks, ...) as opposed to the generic périf of Cubase, very heavy to implement and unstable when changes
- Automation is simple and clear, the path curves is effective
- Editing audio and MIDI is basic but sufficient
- Overall the options are few in number, but so well chosen that it becomes an advantage
- Full amenities: installing a send effect (effect selection directly on the trail work, and the FX track is automatically created and installed in all other tracks with Amount 0) immediate appearance plugs and files in the browser without rebooting, etc ...
With a lot of experience in sequencer, my choice fell on EnergyXT probably for quite a while.
He has a big handicap: its ultra-light prices will make it a bane for those who want to impress with the size of their gear.
And minor handicaps can not delete midilearn individually, it does not display the controls already used when deploying the shaft (it should be that the controls used are checked) and that's about as reproach.
So amazing value for money as long as we love the simplicity combined with efficiency.
Did you find this review helpful?yesno
»

Xt Software energyXT 2.5
For smaller configurations it works flawless but also works for large)
My personal example, I use it on an Acer netbook Atom 1.6GHz, 10.1-inch portable computer, and I used to work dvelopper my ides especially MIDI with some plug-in effects and VSTi is seen on the power of the machine should not expect to mix all a pack of audio tracks, VST effect and because the machine will not follow, but to work in midi + qques effects is enough.
Then I was free to finish on a bigger squenceur at home. The advantage of this solution Netbook + energyXT is to focus on the composition and the establishment of the song.
It is a good way to always have a notepad with you musical, we made a small template and it is a prs in two seconds start songs (EXT starts in a split second, which nest not so large as squenceurs Cubase).
Although lcran be limited to the 1024 * 600, EXT is the only squenceurs of my knowledge that allows plug-ins Dover with larger display resolutions, Open plug-in> right click > new dock and you can see the plug in its total thanks to Systmes to scroll vertically and horizontally (Acesta a good idea).
Otherwise its a simple squenceur trs somewhat in the style of Cubase but more allger. There is also the ct modular is nice, can see a whole DIFFERENT routing of modules.
The only real criticism, but as I ca cest nengage table mix that I find no trrible. Not easy to do with the sidechain EXT.
Rsultat shopping, I recommend it to small config, fixed on a PC can have all had to finish a project without concern, it is more skinable, cheap and easy of use.

Leulapin's review (This content has been automatically translated from French)

Xt Software energyXT 2.5
4
Used on Windows only.
The installation does not worry, this is just an executable copied o one wants.
The manual is well done.

The software is trslger and stable, excellent hte VST.

The performances are above all that it is the vst that saturate the memory but not him. The default is that I would see that VST embark on the main process causing it to swell dmesurment instead they s'excutent spars in threads on hearts prev ent with areas Memoirs ddies.

In terms of stability even when it's a very good product with which I am far less concerned with Cubase. In the limit even if the plant live, restart the program takes a few seconds and it is possible default parameter a piece which will open directly.

I use it for six months.

I once used Logic 5 on PC, then pass on cubase sx3 silent, sx4, Nuendo, with a bit of audacity in moments of dsoeuvrement

What I like is the functionally ct dpouill we will quickly what we want. It is also his default, the paramtrage of keyboard shortcuts is a little summary for gender pramtrer the special touch of a keyboard or an external Controller ... the default is no big timeline for changes mtrique during a song (coming in 2.6 dveloppement if I understood correctly). Cons by the interface is clear on small screens of mobile phones, ts of the machine smokes, beat up with lighting that we continue to have its representatives and do not BTIS using the skin almost black and white is fine.

That's what made me choose it over reaper which is more comprehensive and less expensive. APRS for making models reaper is without doubt better until they implmentent dynamic management of tempos in the songs is really the missing functionality in my current version, otherwise the happiness and ct compatible mac and linux can to some extent to mumuse with friends who have other platforms computer music.