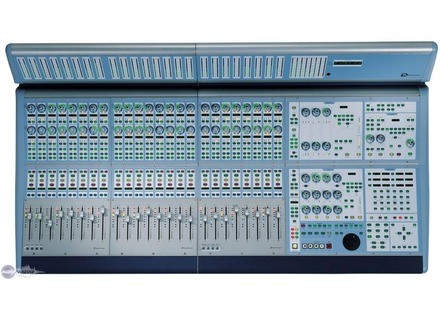 Digidesign D-Command
5
The Digidesign Icon D-Command is the largest and most in depth digital audio work station controller designed for Pro Tools. This isn't a console in the traditional sense - it merely controls parameters and features in Pro Tools. When compared to the other Digidesign digital mixers like the Control 24, the Pro Control, and the 002, the Icon has a lot more controls to offer, and will also take a bit more practice to get used to. This being said, if you're familiar with Pro Tools and know a little bit about mixers, everything will be pretty self explanatory on the Icon D-Command. The mixer has 24 'channels' with faders, solo, mute, record enable, as well as panning, and some programmable parameters. It controls everything that you see inside of Pro Tools - nothing more, nothing less. Honestly, this is the type of mixer that you want in a large studio to impress clients and to have as a main stay in your system when you have outboard pre-amps already. It doesn't actually make any sounds of its own since it doesn't have any built in mic pres, and you don't even really run your system through it like you would a traditional console. The Icon D-Command is designed for professional Pro Tools users who don't want to do everything inside of the box and want external control that isn't satisfied by the lesser models I previously mentioned. It is quite a beautiful looking piece of gear, and certainly has a lot of allure, but it will cost you a serious amount of money for something that doesn't even add anything to your sound. However, if you're putting together a professional studio and want a very in depth control surface for Pro Tools, it doesn't get much better than the Icon D-Command.

See all 77 photos of Digidesign D-Command »