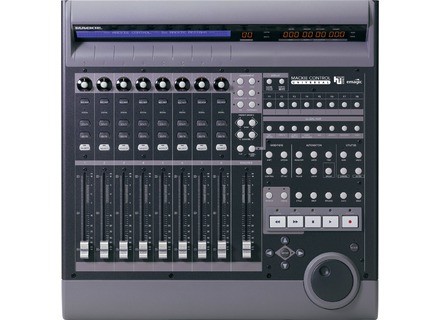 PaulyPaul's review"3 MIDI in and MIDI out"

The Mackie Control Universal has a built in MIDI interface and a great feeling jog wheel. This unit has metal casting and is solidly built. All of the knobs and faders have good slide to them and resistance. There are no audio inputs or audio outputs on this unit. But there are 3 MIDI ins and outs as well as transport controls. This unit is a bigger unit, but it is not too heavy so you can take it with you if you need to. I have been using this unit for 7 months and using it about 2 to 3 times a week since then.

There is an LCD display screen , you can see all of your mixes in real time. I love having all the buttons (50) that the Mackie Control Universal provides. I am able to control all of my plug-ins and VST synths right with the Mackie Control Universal knobs and buttons. This unit costs around a grand, but it is a great investment to have in your home studio because it will give you full control over your DAW and make your life much easier. It is always good to have a console like this that can work with your DAW. It will shave hours off of your session time that you could be using to make more music with.

Mackie Control Universal
4
I used to have one of these for about two years before the mackie control universal pro came out. When this one came out, it was the best thing on the market. Mackie really knows what people want in the control surface market which is still surprisingly very bare considering the potential demand. While the new Pro edition of this product is definitely better in most respects, there are a ton of these going around for sale via used music equipment avenues, so this is a relatively inexpensive alternative to the nicer Mackie control Pro that those with the bigger budget should go for. This control surface has a lot of features that make the Mackie line superior to any other company's offerings. First the faders are top notch quality, made by Penny and Giles who make the best automated faders money can buy. This unit also has an LCD readout along the top that says a few characters of the track names that you have labeled in your DAW. That makes it way easier to keep track of which faders are connected to which tracks in your DAW without having to constantly check back and forth. There are pan pots for each of the 8 channels on this unit, which are normally set to control panning but in most DAWs you can change what they do, for example I have a friend who uses those to control input gain trim instead of panning. There is also a whole section of transport buttons including rewind, fast forward stop and play. Each track also has a solo, arm, and mute button which cuts down on mousing around time. There is a readout of the Now time in the top right to let you know where you are in the song at all times. This surface is also compatible with most major DAWs, and the menu buttons on the right half of this unit will be different for every DAW which is nice as well. These are pretty cheap now, so it's definitely a very good value to pick one up, but again I do recommend getting the Pro version if you can afford it.
Did you find this review helpful?yesno
»

I am sure there are some people out there that have never had the opportunity to mix music down on an actual mixer. There are those that toil over using a mouse to make fader movements on the mix.

Let me be perhaps the first to tell you that you NEED to get your hands on a midi control surface such as the Mackie MCU.

This thing makes it possible to handle things on a mix that would be near impossible to do on a regular mixer and much faster than I could do on a mouse.

It is a breeze to interface into the system using midi and can interface with almost any software on the planet.

I have used it with Ableton, Cakewalk, Sonar, Pro Tools, and Sony Vegas for Video. I have actually not found a program that I can not get it to work with. The midi implementation makes it a breeze to customize it to your lifestyle and software.

It has motorized Penny and Giles volume sliders, continuous control pan pots and a plethora of buttons that will work with just about any feature on your software. The really neat thing about the MCU is that you can have an ENDLESS amount of control. Using the bank button you can slide to the next group of 8 channels and the controls snap into place showing you the positions.

You can also add extenders to add more channels in banks of eight should you need more than eight at one time.

Believe me, once you get one you will wonder how you ever survived by using a mouse to manipulate the series of sub menus on the bar when you can get directly to it with one button click.

The transport buttons are the single most useful thing to me. I love being able to push play, or stop and not have to click a mouse for it. I may be old school. But that is what it is all about.

There are scribble strips that tell you what is on that channel so you don’t have to take your eyes off the board. That helps keep things flowing. The original model is getting quite affordable. I have been using mine over a year and would buy another in a heart beat even at the suggested list price.
Did you find this review helpful?yesno
»
Read the 8 user reviews on the Mackie Control Universal »

Published on 01/21/09
Loud Technologies Inc. announced the appointment of Tokyo-based Onkyo Tokki as the Japanese distributor for its Mackie & TapCo brands.