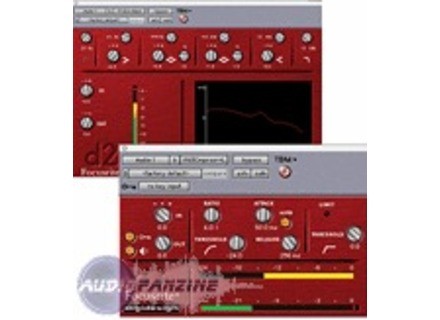 Focusrite D3
4
I recently bought this compressor plugin as part of a bundle from Focusrite. This is a solid compressor, and can also be used as a limiter (though it is, for lack of a better word, limited in that capacity). I did not have any compatibility issues with this compressor, it works well with Pro Tools 8. I didn't really read a manual for this compressor specifically, just the bundle's installation instructions, which were direct and helpful. The setup isn't too crazy, and the controls are flexible. There is a knob for ratio, threshold, attack, release, input level, limiting threshold, and output level. There's a button to put it into "auto attack", which gives it a different sound with a stronger, reactionary attack. There are monitors for comparing the output to the compression levels.

The software has given me no problems as of yet. I think in general, the best thing that you can say about a software is that it works consistently, and this certainly does. It's as stable as any EQ, assuming your system is in working order. Having enough ram to run enough of these at once is necessary. My performance is generally fast, sometimes it takes a few seconds to load but nothing to complain about really.

This compressor does sound pretty good. I wouldn't use it in the studio if the studio had really nice outboard compressors, but compared to a lot of plug ins it can hold its own. I still wouldn't call it my favorite plugin compressor but I do enjoy using it quite a bit, especially when another one doesn't really do the job. I would say that, just like all the plug-ins in this bundle, it's on the cheaper end, and it's really good for home studio setups but I wouldn't use it much in a professional studio if they had better options.
Did you find this review helpful?yesno
»

Focusrite D3
5
The Focusrite D3 compressor was quick to install without any problems or compatibility issues. It was as simple as installing any other plug-in, and I haven't had a single problem with it since it was installed. The interface of the plug-in is pretty easy to follow, as there are knobs for ratio, threshold, attack, release, input level, output level, and a limiting threshold knob. It also has a button for auto attack and has two meters - one for gain reduction and one for overall output level. I don't have a manual for this, so I don't know how helpful it is. However, if you have ever used a basic compressor before, you should have no issues using the Focusrite D3.

I am currently running the Focusrite D3 compressor on a Mac Book Pro that has a 2.2 Ghz Intel Core 2 Duo processor and 4 GB of RAM. I run the plug-in in Pro Tools LE 7.4 that runs off of a Digi 002R audio interface. I have also run the Focusrite D3 compressor on a Pro Tools HD system, and I have never had any issues running multiples of this plug-in at once on either of the set ups. I have run up to five of these at once without any problems, but beyond this I can't say how it will run because I haven't tried. This really has more to do with your machine and configuration than the actual plug-in software itself.

I've had the Focusrite D3 compressor plug-in for about three years and I am very glad to have it in my arsenal of dynamic processors, as it comes in handy very often. It gives me a compressor that is very easy to use and has a clean sound useful for all types of instruments and applications. While there are some plug-in compressors out there that I prefer to this, like the URS 1970 Classic Compressor or Digidesign's Smack, this gives me a new look and tends to work great sometimes when those other compressors don't fit the bill. The price of the Focusrite D3 compressor plug-in is very reasonable, especially if you buy it in tandem with the Focusrite D2 EQ, as this plug-in pack is a great deal. Overall, highly recommended to both professionals and amateurs alike.
Did you find this review helpful?yesno
»