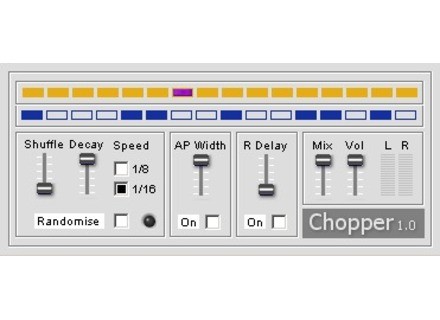 Oli Larkin Chopper
4
The Oli Larkin Chopper is a free VST plug-in for Windows. Most of the plug-ins made by Oli Larkin are only VST/Windows compatible, so the audience will be somewhat limited here. This plug-in is a gate that is pattern controlled, essentially acting as a sort of tremolo and delay plug-in. You can download this and the other Oli Larkin plug-ins from their website at no cost to you at all. It doesn't have a very complicated interface, with parameters for shuffle, decay, speed (either 1/8 note or 1/16 note), AP width, right channel delay, mix, and volume. There is enough control here to provide you with a nice array of different variations, but in general it's sort of a one trick pony. However, it should definitely be easy enough to use where you won't need any help from a manual.

I don't have the Oli Larkin Chopper plug-in running any longer, as I've no longer got a compatible system. When I did have a compatible system, it was with Cubase SX and on a Hewlett Packard Pavilion dv8000 Notebook with 2 GB of RAM and a 3.0 Ghz processor. I had a MOTU 896HD audio interface and was mostly running Cubase SX 2.0. This plug-in takes up virtually no processing power when used in small doses - if you're unsure of how it will perform on your system, give it a shot as it's free anyway.

Oli Larkin's Chopper plug-in is a neat little effect that can definitely be helpful to have around, especially being that it's free of charge. Unfortunately only those with Windows based operating systems and VST compatible DAW's will be able to enjoy using this, but at least for those who can it's free. It's not the kind of plug-in that you're going to use on a daily basis, but every now and again it might be helpful to add a little choppiness to your guitar or vocal for a little added effect. It's not anything too crazy, but it's free and is absolutely worth checking out for those who are able to download it.
Did you find this review helpful?yesno
»