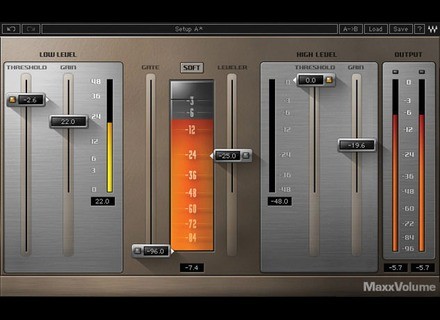 View all offers for Waves MaxxVolume »

Waves MaxxVolume
4
There were no compatibility issues getting Waves' MaxxVolume working on my MacBook Pro. The installation, as with all other Waves Plugins I have installed, was a breeze - whether you buy it as a bundle package or as a solo plugin its easy (waves also provides the option of demoing it). As far as approaching the plug-in goes, you can set it up in your DAW however you want - on individual tracks, on sends or busses, etc. The interface provides faders for low and high level threshold and gain, as well as two additional slides for gating and a leveler with a soft/loud toggle in between to affect the overall compression. Along with being aesthetically pleasing, the interface is very easy to use.

Like all of the other Waves Plugins I have used, Maxx Volume is a very stable VST. Running in my Ableton Live 8 with a 2.7 Ghz Intel Core i7 processor and 4GBs of RAM it works like a charm. I've only been using this plugin for about three months, but I can say that it has seriously bolstered some of my sounds since then. This isn't a plugin I use all the time, mind you. It's something I find works well on the master track or on individual vocal tracks, but can easily be substituted by an EQ and a compressor with a different quality timbre.

Overall if you're going to use Waves Ltd Maxx Volume, watch your levels carefully and don't abuse the power entrusted to you. Its easy to clip and wash out a mix with this compressor so be conservative with its use. That said, I am glad I purchased it and would encourage you to do the same and enjoy another great plugin from Waves.
Did you find this review helpful?yesno
»

Waves MaxxVolume
4
The Waves Maxx Volume was easy to install and I had no compatibility issues with my system. The plug-in comes with Pro Tools LE and is installed while you are installing Pro Tools, so there couldn't be anything easier about that. The configuration of the pedal is a basic compressor and is easy to follow. I don't have a manual for this and I'm not even sure if one exists.

I run Waves Maxx Volume with a Mac Book Pro that has a 2.2 Ghz Intel Core 2 Duo processor and 4 GB of RAM. I use it with Pro Tools LE 7.4 and a Digi002R. I have never run it with anything else as I'm pretty sure you can't run it with any other software because it is a Digidesign plug-in that comes free with Pro Tools. I am able to run a bunch of these at once without any problems and I have never had a problem with it whatsoever - this plug-in with my configuration is completely stable.

I've been using this since I got Pro Tools, which was about three or fours years ago. The sound of this compressor is good and usable, but since I have other options like Smack and a URS compressor, I don't use it all that often. The sound quality is good but is definitely not spectacular. The meters and graphs are a big upside on this as they are quite helpful. The interface is easy to follow and even those with no previous use with a compressor should be able how to us this. I like it on drums and guitars and I probably wouldn't use it for anything else, as the tone isn't vibrant enough for my taste. It is easy to follow though and since the price is free with Pro Tools, you can't really complain about it at all and it is nice to have as an option.

Waves MaxxVolume
4
Volume is easily the most overused and abused thing in the music industry today. Low mixes make things sound lacking in production, and overly hyped volume causes extreme ear fatigue. Waves tries to help cater towards the people who want to really crank up their volume, and this plugin works well for what it sets out to do. The plugin has a gain and threshold slider in the low level section, gate and leveler slider, button to allow you to soften everything and threshold and gain slider for the high level section. Overall, it's a very simple plugin to use. Just enable it on your master buss and start adjusting.

Be sure not to overuse this, please. it's very easy to compress a mix so hard that there are no more dynamics in the overall mix. It does the job it's supposed to do, but I usually just reach for an EQ, compressor and my trusty adaptive limiter for the master buss. It just seems to work out better for me.
Did you find this review helpful?yesno
»

Waves MaxxVolume
5
The Waves Ltd MaxxVolume is a unique dynamic processor with a variety of capabilities. The plug-in was easy to install, as it was just as basic as a process as installing any plug-in out - simply follow the step by step instructions. I can't say that I had any compatibility issues along the way, or any other problems with getting this plug-in up and running. The interface of the software is generally easy to follow, as each feature is split up into different sections, containing sections for low level and high level compression, as well as gate and an overall leveler. Both the high and low level sections have parameters for threshold and gain, while the gate and leveler are simply sliders controlling how much of each you would like. Lastly, the plug-in has a 'soft' button which will make the compression less harsh if you so choose. I can't say anything about the manual for Waves' MaxxVolume as I've never had a need to check it out.

I'm currently running the Waves Ltd MaxxVolume on a Mac Book Pro that has a 2.2 Ghz Intel Core 2 Duo processor and 4 GB of RAM. I run the plug-in in Pro Tools LE 7.4 that runs with a Digi 002R audio interface or a Digidesign Micro Box depending on where I am. I can't say that I've had an issue running this plug-in at all within this configuration, but I should say that thus far I've only had a need to run one instance of this plug-in with a session at a time, so I don't know how well it would run beyond this...

Overall, the Waves Ltd MaxxVolume is a very powerful piece of software. It is great for getting the loudest volume possible from your mixes, building on the success of the L2 and L3 maximizers. This is certainly more versatile than its predecessors, as you have a lot more to work with here, and I'd also say that it sounds cleaner than them as well. The price for the native version of the plug-in isn't too expensive, but certainly isn't the cheapest plug-in out there. If you want the TDM version, as always it will cost considerably more. All in all, the Waves Ltd MaxxVolume is definitely worth trying out if you're looking for any sort of loudness maximizer!
Did you find this review helpful?yesno
»

Flash sale: Waves' MaxxVolume over 80% off

Published on 05/18/16
For 48 hours only, Waves offers its MaxxVolume leveler plugin at a special price.

View all 3 videos of Waves MaxxVolume »