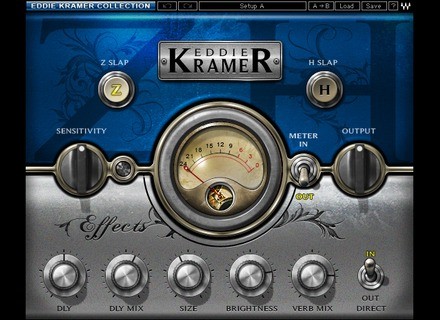 Waves Eddie Kramer Effects Channel
3
For those who don't know, Eddie Kramer has done everything from Kiss to Hendrix and then some. He's a very famous music engineer/producer, and considering that Waves has been doing some engineer collaborations lately, it's no surprise that he got his own plugins. This plugin is basically a delay and reverb plugin all in one with two main settings. There are knobs for delay, delay mix, size, brightness, reverb mix, sensitivity and output. There are also switches to select between the two different main mixes, a switch to change the meter and a few other things.

The plugin itself is very simple to use. Simply enable it on whatever buss you want to have a bit of reverb and delay via your DAW. I haven't read the manual, but considering how simple this plugin is, you really don't need to read it. You should be able to easily figure out what to do by just messing with the knobs. I've never experienced any compatibility issues with this plugin, so there are no issues there.

Waves is one of the best companies when it comes to things like performance and stability. For one, this plugin is a cross platform plugin. That means both Windows and OS X users alike can utilize this plugin without any issues at all. The plugin is also rock solid. I've never experienced a single crash relating to this. Kramer Effects Channel also takes up very little processing power. That's very important as there could be multiple instances of this plugin used at a time. The one problem that it suffers from is that it's a 32 bit plugin. In a 64 bit world, that can be a bit of a problem. In Logic Pro, it starts up a special bridge application to use the 32 bit plugin inside of the 64 bit environment. Personally, I find this a bit annoying, and I'm hoping that they'll go full 64 bit during their next update. I've been using the Mercury bundle for the past six or so months, and I've been loving it.

The plugin is pretty bland for a Waves plugin. For one, while the delay and reverb sound good, I have much better options, even inside Waves. Sure, they might take up some more RAM and processing power, but considering the flexibility I'll be gaining, it's worth it. This is probably the weakest plugin inside of the entire Kramer lineup. That said, it's still a decent sounding plugin, and I'm sure some of you out there will enjoy it quite a bit.
Did you find this review helpful?yesno
»

Waves Eddie Kramer Effects Channel
5
The Waves Ltd. Kramer Effects Channel is a delay and other effects plug-in that comes as part of the Waves Kramer Collection of plug-ins, which was designed by famed engineer Eddie Kramer and Waves in tandem. I installed the plug-in on my system at home along with the other Kramer plug-ins and the full suite of Waves plug-ins. The process was simple and pain free, and should be the same for you as long as you have proper compatibility happening. Learning the plug-in is also not difficult. For delay, it's got two different modes - a 'Z-Slap' and 'H-Slap.' The H-Slap setting is short tape delay emulation mixed with a bit of reverb, while the Z-Slap setting is a longer delay mixed with some reverb. It then has parameters for sensitivity, delay amount, delay mix, size (for reverb), brightness, reverb mix, and output. I found it easy enough to figure out that I didn't need a manual.

The system that I've been running the Waves Ltd. Kramer Effects Channel on is my home studio. I've also used it a bit at the studio where I work, which is Pro Tools HD based, but at home I'm running Pro Tools LE 8 with a Digi 002R audio interface. I've got a Mac Book Pro that has a 2.2 Ghz Intel Core 2 Duo processor and 4 GB of RAM, which has been enough for me to run this plug-in and the other in the Kramer Collection adequately.

Overall, I'm a big fan of the Waves Ltd. Kramer Effects Channel as I find it to be a versatile effects plug-in that is useful under a variety of circumstances. The thing that I've been using it for mostly has been vocals, as the different delays on here are really great for getting your vocal a little wet. I love the H-Slap setting, as it's absolutely perfect for getting some slapback delay on your vocal. I guess it's not really an all in one effects channel as is the case with the Waves Chris Lord-Alge Effects plug-in, but this one is great at the specific things that it does. It's also a lot warmer sounding than the CLA Effects plug, not to exclusively compare the two of them. The Kramer Collection of plug-ins is in general worth knowing about as it's really a great bundle that is actually pretty affordable. You need to get the bundle in order to get this plug-in, so definitely check out the others in the bundle if interested in this one!
Did you find this review helpful?yesno
»