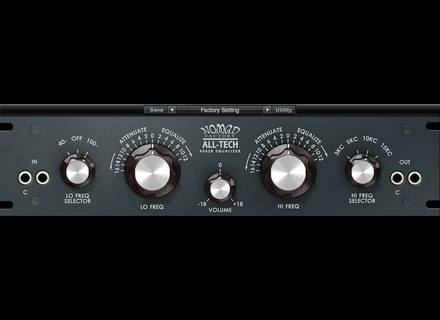 Nomad Factory ALL-TECH 9063B EQ
4
The Nomad Factory All-Tech 9063B EQ is a software version of the vintage Altec equalizer of the same name. I don't believe that the plug-in comes in any bundle as it's sold on it's own for just around $100 US dollars if you buy it straight from Nomad. I don't own it myself but have used it at the studio I work at, so I wasn't involved at all with the installation process. Learning to use the plug-in isn't difficult, regardless of if your knowledge or experience with the original Altec. It's just a two band EQ, with a low and high band frequency. The low frequency band has fixed frequencies of 40 Hz and 100 Hz to choose from, while the high band has four frequencies ranging from 3 kHz to 15 kHz. It also has a volume knob that can go 18 db either way. I haven't seen a manual for this, but it should be more or less self explanatory.

The studio has the Nomad Factory All-Tech 9063B EQ running on all of our systems, but I've mostly used it in the A room, which is our main facility. This room is Pro Tools HD based, with a MacPro desktop computer that has 10 GB of RAM and dual 2.66 Ghz Intel Xeon processors. We also have a Neve 8068 console, Apogee converters, and Barefoot MM27 monitors. The studio is more than capable of handling this plug-in in whatever capacity we need, but I've only used it on two or three tracks at once.

Even if you haven't heard of or used the Altec 9063B program equalizer, the Nomad Factory All-Tech 9063B EQ is still a nice EQ plug-in to have. It is fairly limited in what it can do since there are only two bands with a limited number of parameters, making it best for broader EQ purposes rather than fine tuning. If you use it in this capacity, it's definitely a handy tool, although I don't know if it's worth the price they're asking. It's not too expensive, but when you compare it to the price of their bundles, more times than not you're going to be better off getting the EQ bundle or another one rather than a single plug-in here. This is definitely a nice plug-in, but I don't think it's that nice where it's worth getting instead of spending a bit more to get a full bundle. If you know about the 9063B, you're most likely going be more inclined to check this out first, but I'd encourage all reading this to at least try a demo if possible.
Did you find this review helpful?yesno
»

Published on 04/28/10
Nomad Factory have digitally recreated the vintage ALTEC 9063B Program Equalizer.