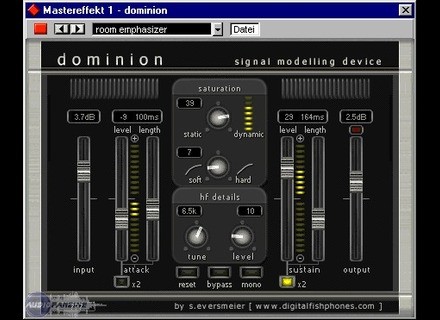 Digital Fish Phones Dominion [Freeware]
4
Digital Fish Phones's Dominion software is a free VST plug-in for both Mac and PC systems. It hasn't been updated in a while, so I don't know what the exact compatibility is going to be with this, but when I used to have it it was on my PC laptop as a VST plug-in. You can still download the plug-in straight from the Digital Fish Phone's website, which has a clear overview of everything involved here, which should be find in place of a manual if you thought you might need one. Essentially this plug-in gives you control over the envelope of your signal, which can be very helpful on a few different levels! The interface consists of sliders for input and output levels, as well as level and length for both sustain and attack. It also has a saturation section and a high frequency filter as well. It's easy to understand while it still provides you with a nice collection of controls...

While I don't have this plug-in anymore, when I did it was running in Cubase SX. I had the Digital Fish Phones Dominion on my old Hewlett Packard Pavilion dv8000 notebook, which consisted of a 3.0 Ghz processor and 2 GB of RAM. I really didn't use this plug-in in an excessive amount at all, using maybe one or two instances at most if that within a session. I wouldn't think that users would have a hard time running it, but as always it really depends on the system you're using.

If you have a compatible system, the Digital Fish Phones Dominion plug-in is free and is definitely worth having. There are certainly other plug-ins out there that will give you control over the envelope of a sound, but this is a unique take on it, and once again, it's free! I really like the layout of this and while the sound isn't going to do anything crazy for you, you can do some helpful things with it if you know how to use and what to do with it. Definitely head over to the Digital Fish Phones website and give Dominion a shot along with the other plug-ins known as the Fish Fillets.
Did you find this review helpful?yesno
»

I use it for some years.
I love to soften attacks too frank, or revive one's a little too cras.
Dominion is the soft rev.
the transient designer of the UAD is drier and pchu.
compltent both are good.

is a pearl in a Ocan freeware, I will not know without it.