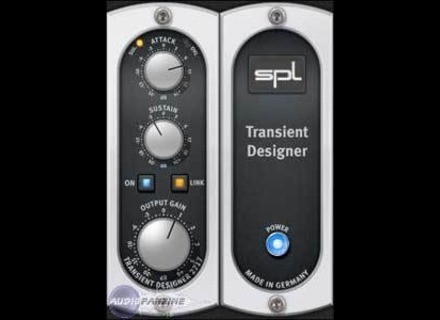 loudfunk's review"So simple, so effective. Don't know how I ever lived without it..."

Universal Audio SPL Transient Designer
5
Easy as pie, download the authorization after purchase and it's unlocked on your UAD card.

Use the Transient Designer on guitars to soften the sound by lowering the AT- TACK. Increase ATTACK for in-the-face sounds, which is very useful and works particularly well for picking guitars. Or blow life and juice into quietly played guitar parts.
Distorted guitars usually are very compressed, thus not very dynamic. Simply increase the ATTACK to get a clearer sound with more precision and better in- tonation despite any distortion.
Heavy distortion also leads to very long sustain. The sound tends to become mushy; simply reduce SUSTAIN to change that. If you, how- ever, want to cre- ate soaring guitar solos that would make even David Gilmour blush, just crank up the SUSTAIN control to the max and there you go.
With miced acoustic guitars you can emphasize the room sound by turning up SUSTAIN. If you want the guitars to sound more intimate and with less ambi- ence, simply reduce SUSTAIN

itchounet's review (This content has been automatically translated from French)" practice ..."

Universal Audio SPL Transient Designer
3
With the UAD-1 Expert pack the install does a super fast, the site of Universal as well organized This plug works perfectly in Nuendo 3!
I have bought your eyes closed because I 'd heard about the hardware version trs nice to give more of lments percussive attack, I thought that this could be a good plug al alternative purchase of the machine. The configuration of the plug is very simple.

The plug is running well now for the plug in itself al careful to use yet with finesse, your exact trs can quickly become Drout. I have used a few lments a battery: a snare drum (so so rang bizar I do better with a compressor), and toms (boost the attack of the toms, I think c is in this area vritablement the SPL plug works best)! In short, a plug which is doing its taf, you just have to adhrer a philosophy.

In the end I thought my serve a lot of this plug, but n 'is a small plug rien.Bref nice, unfortunately not worth its price at all, too bad ... To me it does more gadget or office spare tire in extreme situations as it introduces vritable!
Did you find this review helpful?yesno
»

Does not use too many resources of a UAD-1.

It is a plugin that I find interesting, working his way to the dynamics in a different direction than a compressor.

can be added free of attacks, reduce the parasitic resonances playing with sustain.

Briefly, it gives me a very good plugin powerful enough percussive situations or to model the dynamics of a guitar, or to soften the transients very pronounced on the song.
to link with the transient designer in Schaak.
despite attacks less candid, he is doing well and also offers a nice alternative native range by offering a different sound.

it is my type of mixing tool that can become formidable.
Did you find this review helpful?yesno
»

Published on 10/14/08
Universal Audio and SPL have released the RTAS/AU/VST plug-in based upon the original analog Transient Designer™ which established the revolutionary concept for level-independent dynamic processing.