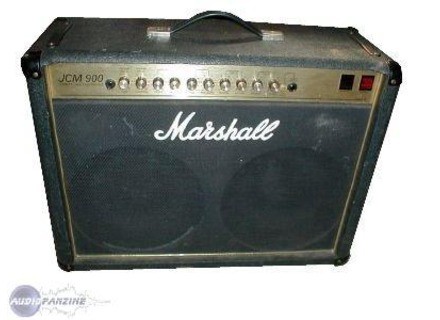 It couldn't be easier to dial it in, given that the EQ (as is often the case with Marshall) is useless (I'll come to this later).
The clean sound can crunch gently and be even a little biting, but that's certainly not its main utility. Likewise, the gain level of the drive channel is easy to gauge but it will never tickle a Recto or any other Hi-Gain amp... Contrary to what its name might suggest, this amp is intended for big rock, stoner, punk, but not to extreme metal, not without external "help." that is!

In terms of sounds, you could be disappointed by two things: A pretty tight clean sound and a drive channel that doesn't have too much gain (a typical Marshall characteristic), despite yielding a really nice color with the gain between 1/4 and 3/4.
But you do need to consider THE main defect of this amp, namely a completely useless EQ. Moving the controls won't affect sound in the slightest, but not moving them at all will make them rust and produce crackles...
However, inserting a (good) EQ pedal in the effects loop will change your life, I really mean it. Clean sounds can take a different dimension, reducing a bit (or more) 800hZ and increasing 3.2 and 6.3kHz. Personally, I have found more than one funky sound with this combo. It's obviously not a Twin, but it's pretty acceptable.
Anyway, don't hesitate to use good drive pedals. A TS-9 on top is an excellent choice, both for the clean channel and to boost the distortion channel.

I've had it for a VERY long time (more than ten years) and I have even had the amp head version (4100). I just had it retubed and checked. The technician told me it was originally biased too cold, which could explain the sound stiffness and a lack of gain. Don't hesitate to ask your guitar tech about it!

Today it has gotten back on its feet and it's a real joy, despite its size and weight. Its useless EQ still bothers me, but the amp works fine with pedals, and its ultra low character could make it an excellent choice if you are looking for a typical big rock, punchy and reliable amp!
Did you find this review helpful?yesno
»

Marshall 4102 JCM900 Dual Reverb [1990-1999]
5
It's an all-tube Marshall (3 X 12AX7 for the preamp and 4 EL34 for the power stage) that delivers 100 watts (switchable to 50 watts).
It has 2 channels, with volume, gain and reverb control each. The EQ is common to both channels (Low, medium, treble, presence).
As usual with Marshall, simplicity is the name, it goes straight to the point and, then again, why complicate things when it sounds good just like that?

Ultra-easy to use. No need for a manual, even if the latter is well done.
As I said earlier, Marshall has always played the simplicity card, and it's easy to get a good sound, be it clean or distorted.

It's basically an amp designed for rock and hard rock. But on channel A, you get a quite appropriate clean sound and the reverb is not bad at all and pretty natural. Fiddling with the gain, you can get a slight crunch and, provided you have pickups worthy of it, you'll get a first glimpse of what this Marshall can do.
Channel B is for distorted sounds. This is not an amp to play METAL, because it has a typical rock sound, but its aggressive side gives you access to a wide range of more vigorous categories.
Personally, I try to avoid effects and I get a good distortion level. But I start from the principle that the guitar has good pickups, with a good output level.
I don't want to enrage JCM 800 fans, which are excellent. The JCM 900 doesn't have that striking touch of the JCM 800, but it has inherited a very respectable sound, with a lot of versatility, thanks to its two channels.. The JCM 800 has a single channel and even if you know how to handle the volume control, it's hard to toggle between clean and distortion.
What's more, you can play at very low volumes with this JCM 900 and still get a nice distortion.
Do note that you shouldn't neglect the quality of the tubes. But that applies to all amps. As far as I'm concerned, I wasn't looking to make a mixture of tubes. I just wanted good quality tubes.
I can assure you this amp sounds very good. And I won't make any comparisons to other amps (Mesa, Fender or Rivera). Each has its own personality.
You can also change to 50 watts by means of a switch. But I don't think that changes much. It can be easily used at low volumes in almost any case.

I've used it for quite some years and it's the second one I have (the first one I had was a 4101, with only one speaker).
I currently have a Fender TWIN AMP and a Peavey ULTRA PLUS, two amps I love and with very different styles.
I've also had several Marshalls (TSL602 and TSL122), an ENGL head and a Vox AC30.
With hindsight, the JCM 900 4102 has its own personality. Because for me, there's no real Marshall, or a Marshall with a better SOUND than another Marshall. There are dozens of models and each has its own SOUND.
The JCM 900 is, at its core, a typical Marshall, I can assert that without hesitation.

Fans of pedalboards and other effects pedals won't be disappointed either, because the tone is excellent.

I gave it 10/10 overall. Even while being pretty demanding at all levels, I like its ease of use and the fact that it reproduces the sound of the instrument.
By the way, it is in its original state and I don't plan to change anything (speakers, electronics, etc.).

I would definitely buy it again without hesitation because it's an excellent amp for live use and its price is pretty reasonable.
Did you find this review helpful?yesno
»

It's easy to dial in, so there's no need for a manual. As for the distortion, it's a Marshall.

I use it mainly for clean sounds, not too pristine.
I play an ARIA PRO TA75 guitar.
The 100w of power are more than enough, if you set it to 5 or 6, it kicks ass.
It's 20 years old and still works fine.

I won't sell it, that's for sure.
Its only defect is the weight!
Did you find this review helpful?yesno
»

Marshall 4102 JCM900 Dual Reverb [1990-1999]
5
Purchased from Mothers Music,Edmonton Alberta,Canada.Bought this unit brand new ,It had been sitting around the store a few years.I stole it for $1325 Canadian (not a scratch on it-like it just came out of the box)Included footswitch.I needed a good solid tube amp for blues,rock,jazz and beyond.

A sweet sounding monster that i can play anywhere.Hendrix-sweet music,sweet music.This amp does it all.I can get all the the sounds out this baby from crystall clear to raunch -just add a wah and away you go again.I've heard all the arguements about amps four to five times the price,I've played about half of them and my conclusion is that this is a Grand Dame Amp of the music world.Classy looks,versatile and responsive controls,Pentiode and Triode swicthability,natural sounding Celestions(G12-75's)that don't color the sound (guitar amp version of the Bowers and Wilkins audio speakers).This amp plays exceptionally well at all volume levels although at the higher end it will your brains out.


This amp is a gift from Greek gods for any muscian.

Powered by four 6L6 Sovtek's-this is switchable.100watts of brute force if you want.Warm ECC83 preamp section and not a microphonic whisper coming from any of them.Build as good if not superior to the Bruno boutique amp line at about a third of the price.Quality is top notch with all the little nuances you expect from Jim Marshall-elephant skin tolex-big Marshall name plate-brushed brass faceplate and backplate-corner protectors and on and on......

I am so glad I came across this jem.I'd been looking for a Marshall for about one and a half years.I don't care what the whiners have to say this is one the great all time amps -PERIOD!!

This review was originally published on http://www.musicgearreview.com
Did you find this review helpful?yesno
»
Read the 24 user reviews on the Marshall 4102 JCM900 Dual Reverb [1990-1999] »