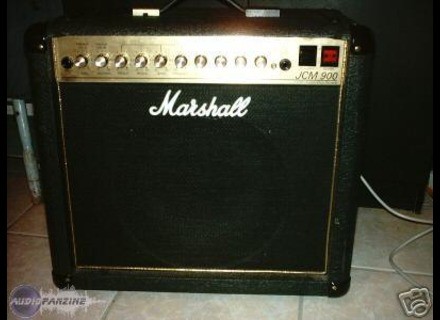 rafilou57's review (This content has been automatically translated from French)

rafilou57's review (This content has been automatically translated from French)

jay_from_Lille's review (This content has been automatically translated from French)

Marshall 4101 JCM900 Dual Reverb [1990-1999]
5
Little amp still quite heavy especially in the staircase colimaons ... Briefly, the weight of all lamps dlivre amp 100 watts 2 channels, one clean the other lead. Rglages are the simplicity of a "Marshallian" is that volume, gain, equalization, and reverb. and channel selection. There are connectors on the back for an effects loop and a SETTING THE latter via a screw ... a system that Marshall did not seem matriser the era.

Utlisation so simple a priori trs but s'avre it takes a while to matriser Marshall sound, this means finding the grain expected. It is not in the extreme positions of knobs gain sounds that will be the best and those who esprent get the sound of a distortion or a Peavy amp that can be caused, they have to know before ... (See other reviews). For my part, I had a Valvestate 8080 and beginners looking for ready-made sounds that I proposed it. So I spent time understanding what I dlivrerait this amp and am not the journey.

In short, we get a real good sound clear need matriser especially with double coils, pushing the gain is a real crunch DGIG on the lead channel, there is the Marshall's and one s 't that kind of a small amp ... Of course, for the solos he seems to lack a little binder and called some of his cronies to limit the effect rescue brutal. At that time it calls into question his technique ... or adding a little distortion a little history of dirty and add some sustain ... or may be a delay ... Anyway it was a great engine, missing a few accessories to overcome the small map of a game sometimes epu draft ...

Currently having a body double JCM900, I can not compare the two m'empcher and weight of the amp is not the only argument that tips my heart to 4101. May be the feeling of not having to get out all the time the big guns ... Now I use this amp for several years, including 4 in a group and still my companion Fidler. I possdais a valvesate 8080 which for me is a good amp for a room or apartment. The 4101 it IDAL rpetitions for studio and live in small rooms or taken on a sound system.
Each guitarist his or her research and it sounds qute a coronation, the 4101 has given me many of rponses and still a lot of trails to explore.

Very easy to handle. English manual but useless. We can go from 100 w to 50 w
which is convenient. Also in case of lamp failure (s) 2 others take over.
After 4 years knobs that sizzle: Disease Marshallian ... Sold without a footswitch.

Good for blues and rock first. It absorbs all kinds of guitars.
The clean sound is disappointing: anemia, without personality. This is not the strong point, much less the Marshall JCM 900. The distorted sounds are better but not worth, in my opinion those of the JCM 800 most dynamic and sliced. As for the equalizer is just too limiting opportunities.

I used this amp for several years on stage and in rehearsal. It is too powerful, even in 50 w to work from home. You really have to push to get results and that side is mind-blowing! I have owned and tried many amps: Other models of Marshall, Peavey, Behringer, Fender, Ibanez, Roland and other rarer (tube, hybrid and transistors). The report qalité price is pretty good. Disappointed with this amp I sold. Let's say I'm not "Marshallian" but rather "Rivera" or "Fenderien".