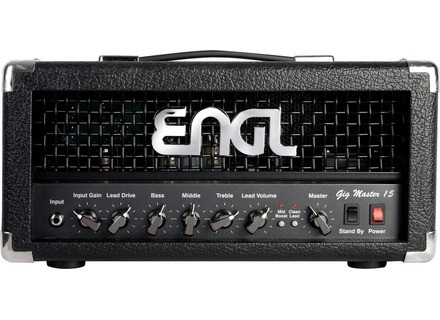 ENGL E315 Gigmaster 15 Head
4
Any head lamp 15 W with pad for recording without sound or headphone jack
position 1 W, 15 W 5W and thereby satisfy its use in any place (house / apartment, Repeat, Live)
For me it's really an example of configuration that should inspire many brand amp the only thing I noted was the moment are two Default I compensated but are still annoying to be on top of the top in my opinion
I'd stay on to the end

8.4 KG with its light on the balance between small nighttrain vox and hug TubeMaster 18w he knows how to be discreet, but is present
The volume setting is simple and very fast we get the sound you seek

from blues to metal, jazz or punk I think versatility is prime contractor are more t ^ this you have the possibility to put a footswitch can change the channel and especially Boost which is not negligible when addressing the chorus and we want to be heard
I love this principle we all do, but not for me it comes in a non-negotiable criterion
There are certe good pedal but I find it so different.

Personally I am conquered I would have liked more light but still want to lower the price is very affordable and the sound can correct configuration are honest and very satisfying.
you can connect two HP 8 ohms or 16 ohms 1 hp to register or listen with headphones without disturbing his girlfriend in bed
I spoke to two default indeed no reverb and it is sorely lacking I will loop effect with a small multi purpose with which in addition to reverb and delay I am finally all the tuner to advance
And it is sold without case I have to buy a small duffle its dimension and we are part of the adventure

ENGL E315 Gigmaster 15 Head
4
-15 Watt lamps (hmm, I would say the hybrid tube &#39;, but I will), 2 channels, running under 15 watts, 5 watts and 1 watt -1 ECC83 in preamp, 2 EL84 power section outputs -2 8 ohm or 16 ohm 1 output another output 8 ohm -1 + powersoak, usable only basis. Passive 3-band eq, adjustable input gain, drive and volume for the lead channel, 1 mid boost switch, a joint master effects loop -1 -1 line out I put him 8 for the loop and powersoak effects integrated and the line out to register who are smart options on an amp in this category! Now, let me explain the hybrid side of this amp. we are dealing with a tube amp, knowing that the 2 sections of the amp contains lamps. Nevertheless, I do not know too much electronics, but I would say that the preamp is a hybrid: The lamp preamp would be a phase inverter lamp power, which has the effect of adding the dynamic when the master is pushed too far (if an electronics reads this, and he knows gigmaster, send me a PM, I&#39;ll do an edit). For much distortion with a single lamp preamp ... I no longer believe in Santa Claus! Now the purists&#39; all lights have stopped reading, continue on the many qualities of this amp.

"Nothing&#39;s easy in use. it is not invaded in the controls, but there was enough to sculpt the sound effectively. It connects, it sets the powwersoak the desired position, and it sounds! The mid-boost is effective and musical, it adds warmth and a nice presence to the sound. and I must confess that for me, a mid boost is 100 mid scoop. The eq is excellent. It will be very demanding to reproach him anything. All combinations are exploitable and can radically change the sound of this gigmaster, while retaining its own character. knob the bass is perhaps the least usable, but I suspect the little 10 inch celestion cabinet to be there for something. The combination of adjustable input gain and the volume pot to drive makes it easy to find the grain of saturation. The volume knob allows the lead channel, depending on your input gain adjustment, to have the same volume of clean to saturated. -The manual is both clear and sufficient, in English. in fact, its use alone is worth a good 10, so we do not blame him for the common eq 2 channels. but the footswitch is not provided (and still costs 70 euros), I 9.

I play mainly blues rock, hard rock, metal. I play on a modified esp sv, rise and emg splittable, a rise in dual DiMarzio Ibanez, Fender and a rise in double seymour 59 and great pearly gates. And I say a big yes to this amp. the sounds are very good even with his small firm. Is it a vintage character, with a bit more cutting edge and distortion options. the 3 available powers are exploitable and can push the power section even at low volume. hendrix tones with a slight crunch on the clean channel, no problem! open chords, pushing huge master and input gain, always on the same channel, and hello The Who, or even AC / DC! we add the mid boost, and we are very close sound to Stevie Ray Vaughan, fat and music. The first channel is undoubtedly a great success. The heat lamp is beautiful and there. The clean sound is well crafted even if it leaves a little forgotten, even if my guitars pushed me out to reduce the input gain to get it. All this with a fine material, probably made by EL84. It engages the lead channel, drive at 10, input gain at 12 o&#39;clock, master at 11am, and there is a fine saturation, both clean and warm. I can not get no! Lead to 13h, and you begin to get into the serious stuff. The grain is rock or hard rock. I reset the mid boost, and I think I&#39;m Paul Stanley, power chords power. It is always nice, it does not bleed. Finally I push the gain at 15h, 14h to gain entry. and all those who say that this amp is that vintage go to bed! Distortion is powerful solos tear, the palm mute too. Not enough to play play extreme metal either. This is not his field. But in terms of Megadeth, early Metallica, Iron Maiden, we have everything we need. Optionally, you can add a lot of cutting with treble, but I&#39;d rather not accentuate them too, I avoid extreme EQ to change the channel. I put 8 for his versatility and for its high quality sound. I plan to pay me a 2X12 in the future for a better overall record, and surely a better presence in the low saturated. But know that powersoak only works on 8 ohm!

I the User for 2 weeks. I tried a lot of amps, even though I was less bad for my own amps so far ... Rect&#39;o the verb and a Mesa Dual Rectifier, the Laboga Caiman, a JCM2000, a fender hot rod deluxe, a engl screamer 50 for lamps. I had a small ibanez valbee ... no comments! I owned a Marshall MG30 few years ago, I played on a Hughes and Kettner Attax, a peavey envoy transistor level. I am disgusted forever modeling with a peavey vypir, and a line 6 spider. For amps of this class, I tried a marshall haze 15 of his cabinet, and a vox night train (unfortunately in a room with acoustic deplorable ...). and this amp is my favorite! saturation haze lacks punch for my taste, and the vox were in these conditions sound shrill. I wish I could test it under better conditions ... I also regret never having found a tiny terror close to home ... This gigmaster to sound very organic and very versatile! for its price, I expected nothing better. it is very well thought out, lack of integrated effects is caught by the loop, and its great power (as it is!) is usable on all volumes through powersoak. Obviously, clean sound is not that of a Fender upscale, it does not rectify a heartbreaking disto ... but it must be viewed in its price range! appearance semi hybrid repel, but honestly, the sounds that draws us forget such considerations. Remember that even some well known high end are never truly &#39;All Tube&#39; (Rectifying diodes in Mesa, and it sounds hellish. Well there is still different, the distortion is still entirely supplied by lamps) a good, very good amp, then, for limited budgets, who need a tube amp that goes a little further than most of his colleagues at 15 watts use and range of sounds! a little more transparency from Engl its construction would be significant for those who do not know too much about the complicated world of amplification, 8 then!

22 of 24 people found this review helpful