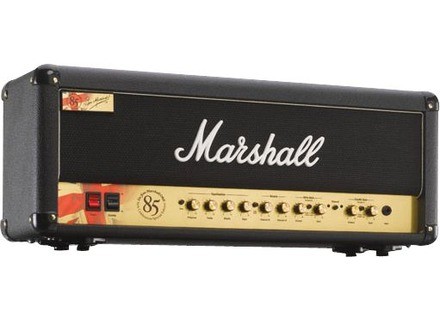 Marshall 1923
5
I own it for a couple of month from now, i've use the DSL before and it's kind of the same but even with the same setting it does't sound exacly the same. I do prefer my 1923 but it's not a huge difference. It's kind of a limited run of dsl with a little kick!
Did you find this review helpful?yesno
»

Marshall 1923
3
The Marshall DSL 85th anniversary head was made as a limited edition amp by the company recently in order to capitalize on the 85th birthday of Jim Marshall, father of loud. At its core it's a two channel Marshall head. Each channel has two modes available, offering different levels of gain. There's also a great onboard spring reverb and an effects loop as well. It is a 50 watt head and it could be purchased in a combo format as well. It is basically a deluxe edition version of the standard DSL 50 amplifier both in looks and tone.

Getting a good sound out of this amp is pretty simple. it has an interface much like other British voiced amps, with the traditional gain and EQ controls for adjustment. I find it to be less responsive to subtle tweaks of the controls compared to other high gain amps on the market, but the core sound is very much a typical hard rock EL34 based tone, great for everything from AC/DC to Whitesnake. To be truthful I prefer amps like the Splawn Quickrod for functionality as far as control reaction, but most diehard Marshall fans know how to make them work. I myself am more accustomed to high gainers with very responsive and sensitive controls, but that's another type of amp altogether.

It's possible that Marshall made a few minor circuit tweaks to this particular head, because it soybeans bit rawer and less buzzy than the standard DSLs that I've used. It can still get kind of ice-picky at high volumes, but it has a more focused sound, whereas the regular DSL 50 can sometimes lose a bit of definition in the low end and end up sounding thin when placed next to more modern sounding amps. The clean channel has a decent sparkle to it that is a voice all it's own, not trying to be a Fender or VOX type of sound. It has a bit more of a scooped midrange voicing which can either song great or awful depending on the settings. The drive channel is pretty good too. It has the classic Marshall bite and raunch and when it's EQ'd to taste it sounds pretty good for sure.

All in all I think the Marshall DSL 85th head is a decent yet overpriced amp for what you're getting. They sold for about $2000 new which is way too much considering something like the Splawn Quickrod is less, and likely easier to dial in/sound better. I'd give one a try for the right price but honestly you'd be better off with a used DSL or Splawn QR and some cash...
Did you find this review helpful?yesno
»

Marshall 1923 manuals and other files