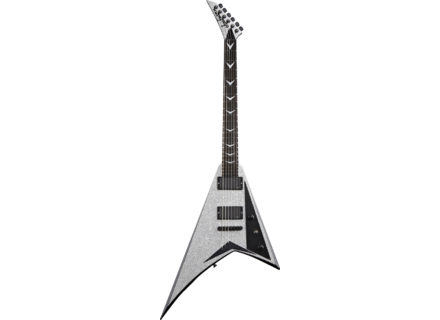 Jackson Mat Tuck
5
- Guitar made in Japan.
- Alder body, hard maple neck through, ebony fingerboard 22 frets.
- Strings traversing, easel-type tune-o-matic, mechanical locking Sperzel, emg active pickups, 85 for a handle and a 81 for the bridge, graphite nut, mark key motorcycle (short for mother of pearl and toilet seat) herringbone reverse head.
- Two volumes, a three-position selector.
- The neck is quite thin, but a bit wide, the profile should be a D flat.
- The size of the handle and the tune is the same as the randy rhoads.
- There is a hatch in the back of the body for the 9V battery, no need to unscrew anything to change it.
- At the finish it comes in white, black and silver sparkle (it&#39;s a silver, glittery, it&#39;s the model I have, its been weird at first, but his final pass).

- Nothing at the level of caractérisitiques this guitar I put a 9 on 10. On paper it&#39;s already salivée. Well I read a lot of crap at the description on the auction sites online, such as set neck, EMG 60 or both 81, ... In short it is now more about catalaogue Jackson so you can find no description but its official corresponds to what has above.

- Good as all randy rhoads flying V and it is not easy to play sitting with, but if you hold property or with a strap so short, really short, its happening.
- At the weight is pretty light, standing balance is good even if it tends to leave a little before her is that the clip is on the back of the body and not on the side, but nothing too embarrassing .
- The handle is super comfortable, the hand stroll along the entire length of the handle without worry, there is no discomfort to reach the 22 th fret on any string.
- The knobs are progressive, a good distortion, lowering the volume may well get a good enough nerveu crunch.
- The ebony fingerboard is very comfortable to play compared to the rosewood is softer, smoother, more supple. It is hard to describe in any case is quite different, but not in a negative sense.
- Sustain The vacuum is already very good, and it is an impression that is confirmed as soon as one branch of the beautiful, both on a clean sound that crunch, that big distortion. The neck-through and through-strings are not for anything in this sustain the Paulien.
- The tuners are Sperzel terrible, it was fine grind the ropes in all directions, 2-tone bender like crazy, there&#39;s nothing left to the agreement. Once the strings are made (a lil days after being asked), it suffices to réaccoder every summer solstice!

- I put a good 8 out of 10 this section for the ownership, sustain and mechanical wraps.

- At the sound, I plug the beast in a mesa boogie TA15, well he is not done too much for her, but I use mostly tweed mode on channel 2 with a Satchurator upstream and frankly the result is more than satisfactory . But I still think a monster offer power metal this guitar.
- For clean sounds, she is doing rather too bad, the bridge pickup by itself is a bit dry, the neck pickup it is plump and thick, but be careful with its active pickups crunch quickly. The best to play his position is clear then all intermediate or for micro manchelle has a small side slamming into his clear who is not at all ugly, but hey it&#39;s not a guitar made for playing funk .
- In the crunch, it begins to show, it has a significant punch, the notes are well defined and it happens to ring all the strings in the same way. Again it can tend very quickly to the distortion if you push the bottom or microphones is increased the gain on the amp. on the other hand to be expected in the crunch like the Stones and Creedence is rich and full as his property and his attack immediately. With the neck pickup can get a little bluesy sounds with lots of potatoes.
- In distortion, this is where its gets interesting. The notes are very well defined, the palms are mute murderers, natural and artificial harmonics fuse, ... You&#39;ll understand this is really the field&#39;s preferred device. The sound remains clean and does not bleed despite you push the distortion, and there is not the heavy side and deaf that you can have a les paul.
- It sounds better in a lower tuning, drop a C-style, basic pulling rope is 10-52, so it necessarily helps to relax the whole.
- Whether it&#39;s gaming power chords, chordal arpeggios, tapping into ... the sound is always well defined and means any person not like the porridge, thank you emg and ebony.

- Knowing Bullet for my valentine, I must say I find this a bit with her, but she will agree very well with other styles (Trivium, Children of Bodom, Machine Head, Atreyu ,...) just enough set each amp a little differently.

- On this topic I put a good 9 out of 10, because she did what she did (the metal to the bullet), but also because we can do something else like the big rock still big blues.

- I&#39;ve now been ten days before I tried a RR5 and RR24, well to me it&#39;s just the best of 2
- Also it is worth about 100 euros more than the classic RR5, the difference: it is already mounted emg (worth about 150 euros), Mechanical Sperzel (about 100 euros) and reverse the head. So why pay more for nothing??
- Nan without messing it to arguments and sacred, as said microphones, mechanical, is not a luxury, in addition to her we can add the ebony fingerboard. The rest not change too much of a RR5, but the sound itself is quite different.
- Value pricing is super good, good it is still expensive, but the Japanese made guitars will know, perhaps even better than some Americans. In short, if you like Randy Rhoads, you&#39;re looking for a powerful and well-edged scraper this is for you, if in addition you&#39;re a fan of Bullet for my Valentin, go for it!
- That you have understood to make the election again, I would do without hesitation, this guitar is a brand I like, the only problem I have not managed to find it in white, a pity!
Did you find this review helpful?yesno
»

Published on 01/23/09
Jackson has released a new Matt Tuck (Bullet For My Valentine) Signature model.