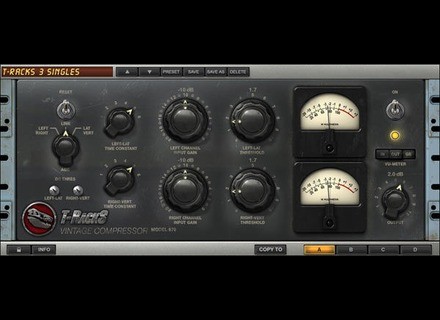 IK Multimedia T-Racks Vintage Compressor Model 670
5
IK Multimedia's T-Racks Vintage Compressor Model 670 is a plug-in found in T-Racks 3 Mastering Suite software, but is also available as an individual plug-in in either RTAS, VST, or Audio Units formats. I've used it both in T-Racks 3 and in Pro Tools as an individual plug-in. I don't know what the installation process is like if you buy it as an individual plug-in, but obviously if you're installing T-Racks 3 it installs the entire software altogether, which is an easy enough process to complete. Learning the plug-in is pretty simple, regardless of if you've used the original Fairchild 670 that this is modeled after. Each of the two channels has parameters for input gain, threshold, and time constant, as well as programmable meters. It is definitely the most authentic looking plug-in version of a Fairchild 670 that I've seen, or at least it's better looking and more true than the Bomb Factory Fairchild 670 since it has the stereo pair and all of it's selection parameters. I haven't seen a manual for this plug-in individually, but I believe it talks about each plug-in in the T-Racks 3 manual if I'm not mistaken.

Right now I'm running the T-Racks 3 Mastering Suite with the IK Multimedia T-Racks Vintage Compressor Model 670 plug-in on a Mac Book Pro that has a 2.2 Ghz Intel Core 2 Duo processor and 4 GB of RAM. I run Pro Tools LE 8 with a Digi 002R audio interface that has been modded by Black Lion Audio. I've also run this software on a few different Pro Tools HD systems. Either system you run it on it doesn't matter, as I believe no matter what the plug-ins are used in, they are always used in RTAS format, even in HD (although I'm not 100% on this). This plug-in definitely takes up a good amount of processing power, so you won't be able to go too crazy on it, or at least I wasn't able to.

I'm overall a really big fan of the IK Multimedia T-Racks Vintage Compressor Model 670 plug-in and of T-Racks 3 in general. I think that while this doesn't really sound anything like an original Fairchild (as no plug-in ever will), it is still a very useful compressor that actually has a pretty full and realistic sound. Whether you're using it for mixing or mastering, this plug-in can do the job. I'd really encourage those interested in this plug-in just to go ahead and buy the full T-Racks 3 Mastering software, as the price they're asking for this individually doesn't add up when you consider what you can get the full software for with all of the other plug-ins as well. Either way, this plug-in is a great addition to any recording rig.
Did you find this review helpful?yesno
»

IK Multimedia T-Racks Vintage Compressor Model 670
5
No problem on the system, with major formats and managed a relatively simple system Serial I prefer by far the iLok.

Core i7, 16 GB Ram, M-Audio C600 or Gina3G in Studio One. All this fontionne perfectly and I've never felt any heaviness on the side of the plug.

I use it for 2 years on drums, vocals, bass, piano, Rhodes and Wurlitzer, etc..

In fact, it is the compressor I go when I need to color the sound, give it a little thickness and especially to inflate the bottom of my signal. If you are looking for something transparent, so go your way.

I have no opinion on the quality of the emulation, never having disposed of the original stuff but given the very affordable price of this plug and simple settings, I can only advise as analog compressor with mojo a predilection for the bottom: it makes it possible to heat a singularly signal tweaks and give it a nice base. In short, good plan.