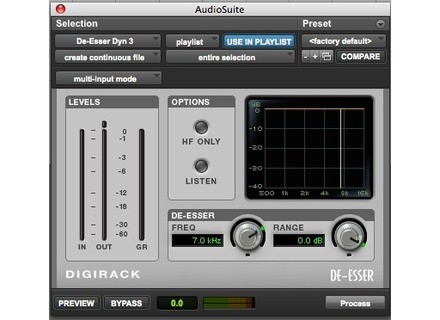 Digidesign DigiRack De-esser
4
Digidesign's DigiRack De-Esser is a plug-in built into the Pro Tools software. I've used it with both Pro Tools 7 and 8. Installing the plug-in doesn't require any action beyond installing the Pro Tools software since it does take care of installing all of the DigiRack plug-ins at that time. The interface of the plug-in is really quite simple, as it just has parameters for frequency and range and options for high filtering only and bypass. It has a graph as well as input, output, and gain reduction metering. A manual isn't something that you'll need to reference with this plug-in I don't think.

I'm currently running the Digidesign DigiRack De-Esser plug-in in Pro Tools 8 on a Mac Book Pro that has a 2.2 Ghz Intel Core 2 Duo processor and 4 GB of RAM. I run Pro Tools LE with a Digi 002R audio interface for the most part, and also with a Digidesign Micro Box if I'm on the move. I don't ever need to run too many of these at once - at most I'll run it on one or two on vocal tracks. I've never had a problem doing so and don't think I'd have a problem if I ran more of them as it doesn't seem to take up too much processing power.

I don't really have any major complaints when it comes to the Digidesign DigiRack De-Esser. It's incredibly easy to use and actually sounds quite good for a free plug-in. It doesn't sound as good as some of the other de-esser plug-ins out there like the Massey De-Esser, but it does the job if you don't have anything else on hand. If you've got Pro Tools in any capacity I'd recommend that you to check out the DigiRack De-Esser whenever you get a chance as it's a pretty good de-esser for something that is stock with Pro Tools.
Did you find this review helpful?yesno
»