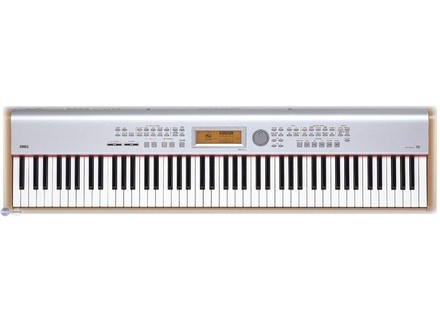 boba_fett_nr's review (This content has been automatically translated from French)

Korg Sp-500
5
88-key piano-style touch heavy (heavier in the bass in the treble).
Many sounds available in most tradditionnels piano sounds such as strings, brass, etc..
N'tant no date Owner 'of this keyboard I can not say more, but on paper they seem complete.
Connectivity complte: Noon, audio out, headphone, sustain and volume pedals.
Small touch screen, and direct ACCS core functions.
A note also that the keyboard is not amp: gain advantage of volume, weight and price; inconvnient requirement for an amplification supplmentaire (but can be used for other purposes).

I did a one-hour test yet.
Parrait enjoyable touch me in the spirit of pianos numriques a little more lightweight than a "real" piano, but more like a piano than a synth.
Without mode employs IMMEDIATE I find the sound I was looking for.
It is equipped with a squenceur (8 tracks I think) and it allows him to play the accompaniment, trs also simple to implement.
In rsum trs trs simple. I have not seen the manual but it should not be very large given the simplicity (the screen is clear and trs in French and more).

I can not really speak his cot because I try in a shop and only the headphones. But nothing shocked me I would say the sound is good to see my good compared trs Previous synth bought in the 90 ...
Trsraliste for me after all.
RAS
I put only 7 because I could not really test, but it was a trs Premire good impression.

Test only shop for 1 hour.
I apprci price, size (portable), the squenceur (like a synth), and claiver (88 keys Leste).
I would say certainly the best technology-quality-price for a keyboard 88touche lour with a touch squenceur (including rhythm box)
I do not have a way of competing in the market rsum I put 9 because it is always possible to +.
Did you find this review helpful?yesno
»

Characteristics that made the SP500 is still the only one to provide for long.
Can not find a portable piano that can act as an arranger, arranger keyboards all had at most 76-key synth-style.
Now things have changed a little (Casio, for example) but the SP500 is currently the only one with comprehensive professional features.

The keyboard is good, it's nice to play.
Not very heavy but with a resistance that is fulfilling its role erzast piano.
The manual is correct.
With its touchscreen keyboard usage is generally straightforward.

The main piano sound is good.
There is of course a matter of taste, for my part I am still more comfortable with the Roland piano sounds, my first digital was this brand.
I had a Yamaha P80, I liked him but he did not satisfy me as much as my Roland (RD300, FP8, A-90).
He had to adapt myself to the SP500, I found the sound a bit "stuffy" at first.
In fact, one must understand the perspective in which the sound has been sampled.
Now I like the record "sound" of the piano, coupled with a compact Li Bose for example, it sounds really good.

The functions are arrangers, the arrangements sound good.
In fact I realized that in broad terms the SP500 resumed the engine module arranger I40M.
on the other hand is less comprehensive, no export duties or place of user styles.
And that's a shame.
There are 64 memory locations for storing the parameters of a personal style (mix of instruments, split keyboard, tempo etc..) But you can not backup or replacement of the bank.
It also lacks a few buttons to call as patterns A, B, C, D need in order to scroll up or down with two buttons.
Obviously, the styles are not up to date but to be a directory variety it is still quite usable without seeming corny.

I found myself cursing the business that impose restrictions on the instruments so that it remains confined to a niche technical and financial assistance.
When we know that the SP500 was the only of its kind to exist for many years we thought he might have been a little more generous to chapter, the SP500 would compete any other instrument in their range.

All the sounds are good but they obviously have a little older compared to what exists now.
Older but not obsolete.

I use it since 2005 in a professional setting.
I bought a second one in 2007 as working regularly in a restaurant I left a piano on site.
So I took another one to the other gigs.
The first purchased 600 € with his fly and the second € 650 new state I am more than fully satisfied with the value for money especially, again, there was nothing comparable on the market.
Meanwhile I can complete the keyboard with a Midjay Ketron, which freed me from stress related to the number of memory location for the styles.
on the other hand I prefer the recognition agreement of SP500 is very good at it.

Now playing on PC with vArranger vsti and I no longer need the feature of the SP500 and I'm about to buy a keyboard touch lighter to carry heavy, so I do not do it again this election.
But the SP500 does not disappoint me and I'm very glad I made the journey with him.

It is a very good instrument that was able to play the card of compromise and flexibility to bottom.
Did you find this review helpful?yesno
»