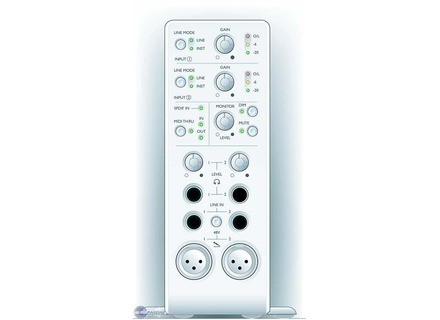 Saffire, FireWire audio interface from Focusrite in the Saffire series.

Focusrite Saffire
4
The Focusrite Saffire had a great sounding quality, it actually surprised me, the only thing that I didn’t care for was the way that it was built. It was built standing upright like the old Mbox was and I hate it being up like that. I would rather have it going flat and sideways. Just because I usually have stuff that can end up knocking it over. The Focusrite Saffire is no longer being made, so buying one will have to be used. But if you can get your hands on a used one you will love it. I still to this day choose the used one over the newer one that came out around a year ago. I cant remember what they called the new one, but I like this one better.

Using it took no effort at all, everything is labeled in plain site right on the front of the interface and its all self explanatory. You can plug your mics and instruments right into the front of the interface. But since it’s a standing up right interface, you plug your mics in, if you have a lot of mic movement or your cords get moved a lot your will start to see this device slide around a lot, its very light. Its not top heavy, its just light.

The price of the Saffire is very good now, I recommend purchasing it if you need a good cheap interface. The software that came with mine when I purchased it, I cant remember what it was, but I didn’t use it I actually probably threw it away.

Overall, it’s a great interface. If you cant find it online to buy used then you will probably need to go ahead and get the upgraded version which will cost a lot more than this one will used.

To record vocals with my laptop outside the studio.

- Did you have any problems during installation?

I tested several Firewire PCMCIA cards and the solution was to have THE ADEQUATE POWER SUPPLY WITH THE ADEQUATE AMPERE VALUE!! The device requires 12 volts and 1.5 A instead of 1 A as labeled on the housing (1.5 A on the Focusrite website). My 1 A PSU wasn't enough with the laptop. I'm happy I solved the problem because I thought I would have to sell the card just after having bought it (secondhand and without PSU). I found the right PSU on the web. I pass this information on to you because I spent a very long time looking for patches and other solutions. The problem was the incorrect specs on the device...

Other than that I had no installation problems.

- Did you have any incompatibility problems?

No (except for the mentioned PSU problem!

My laptop is an old Toshiba Satellite 1410 (1.8 Celeron, 512 MB Ram) I use only for outdoor recordings as a 4-track recorder. I own several stage mics and a tube mic, a JoeMeek MQ3 preamp and a VC1Qcs.

My main computer is a Core 2 Duo 3 GHz with a Scope sound card. I had no installation problems with the Saffire.

- How complicated is the overall configuration?

The software mixer is not very user-friendly nor intuitive but you'll get used to it. I noticed some bugs while setting the compressor (the application closes when you quit the compressor). You can save your settings and forget about them.

The reverb effect sounds good but not amazing. It's better than using a VST or directX reverb plug-in because of the latency, and it has enough quality for monitoring applications. Both headphone outputs are convenient to record someone while you control the recording.

The user's manual is maybe too comprehensive and it could be easier to read because the internal routing is quite complex. It doesn't provide enough pictures and application examples. It has a muddled layout and the font is not easy to read (I would prefer a simple font like Arial, Times, etc.).

I give it a 7 because of the PSU problem (nevertheless the solution is now available on Focusrite's website...).

Are the drivers stable?

- Which software do you use?

- What's the latency of your system?

It depends on your computer, but it's irrelevant thanks to the direct monitoring function. I'd say 6 ms with both computers (I haven't tried lower latency times). It wasn't necessary to have a Firewire card with a Texas Instrument chipset on my laptop, while my Iogear GUF202 also works pretty well (Firewire/USB2 combo). An ABIX 3 TI works fine too (both are OCHI compatible, which is required by the Saffire).

- How many tracks can you record/playback simultaneously ?

It depends on the HDD speed and the computer. The Saffire provides four analog inputs plus an SPDIF input, all usable simultaneously.

With the laptop I only record one or two tracks at once using both Saffire preamps. In the future I might connect a Firewire HDD to the PCMCIA card or to the Saffire (which has two Firewire ports, one for the computer and another one for an HDD or some other device).

I've been using it for almost one week. I did some test recordings with a Heil Pro 40 mic. The preamps sound very good, better than the preamps of an MQ3 (small but good preamp). The digital connection is also an advantage . I can't wait to make more recordings with these preamps and some good mics, and I'm sure it will be a great solution: less gear, less cables... The two preamps allow you use stereo recording techniques or to use different mics, etc.

Cons: some bugs in the software, no auto-save function (but you can save presets). The volume of the headphones is a bit too low. You won't become deaf... Very good sound on the headphones.

I bought a Behringer FCA202 for my MQ3. It's a good sound card for line signals (4/5 ms latency) but it's too delicate, headphones sound awful, and it only has two inputs and outputs... I also own a Sonicore Scope, which has an excellent sound but it's installed on my desktop PC. That's the reason I went looking for a good mobile solution. And I'm not disappointed: my recordings sound very good (much better than before).

Excellent... I bought it secondhand, but considering all its features it isn't that expensive if you buy it new... It's an excellent choice for my budget.

Yes, I wouldn't hesitate.
Did you find this review helpful?yesno
»

Focusrite Saffire
5
VST inputs are great with the presets but you still get to tweek it.

This is easy to use but if like to be hands-on it doesn't have very good knobs. The gain led's on the hardware suck. You always have to adjust the gain on the software. I had a problem with the device driver but that was handled easy by downloading the new saffire control at www.focusrite.com. The website has tutorials that make it easy on the rookie.

Its built very well with a sleek look that could match with Mac's.

Though theres only two mic pre's, the sound quality is excellent. Its what you would expect from a Focusrite. VST inputs are great with the presets but you still get to tweek it.

Saffire is a great way to realize your musical talent. The price takes from knobs and mixer led's but it doesn't suffer in Quality in the sound.

Originally posted on FutureProducers.com
Posted by: ChaseMillions ( 2-, 2006)
Did you find this review helpful?yesno
»

drOnic's review (This content has been automatically translated from French)

Focusrite Saffire
4
Jai M itulise a box for a year then I was the recovery so I had bought a new sound card. I work on Win XP, especially j'itulise Abelton Live and Reason in the studio (my room) and live.

The install with the cd that comes with was not reassuring because he told me that there was a file that he could not replace. j've downloade the driver from their site, and I have to do the install, it worked without a problem this level.

Once the install done, I tried the plug ins that come with that are good but a little cold for me, and then surprise! the Saffire Control software (that comes with and all settings or are) tell me more connection with Saffire! In fact there are more sounds, I re trying to do anything. It took desinsttaller then re install the driver for it to work again but after a minute ca gives me a connection lost every time. So start with the many e mails at the beginning that Focusrite have been very fast and friendly (a rarity) but as a far as my problem is not resolved, their responses were becoming increasingly scarce and evasive! And finally I end up with a Saffire I can ituliser the software (nor for that he is no disconnection) so I have no plug ins or access to or the settings of the various in and out. Even the buttons on the machine no longer respond, and stay in their base configuration. I do not know if it happens to others or just to me but it's not safe c normal and all my attempts to solve these problems have failed, maybe the next driver that will come out as Focusrite next period ca ... follow.
Otherwise the score, there's nothing to say converters and pre amps are very good especially for this price, better than the M box, the latency is a great day arrives 5 ms in and out. Saffire manages all sounds coming out of the computer.

Problems has been part c c sure is a very good sound card, report quality / price excellent, must know that all the same plug ins as if they are itulises effect from your sequencer they ituliseront your cpu resources. Firewire also can be problematic with itulisateurs of win xp service pack 2, but there is a update from Microsoft that fixes this problem.

Did you find this review helpful?yesno
»
Read the 10 user reviews on the Focusrite Saffire »

See all 47 photos of Focusrite Saffire »