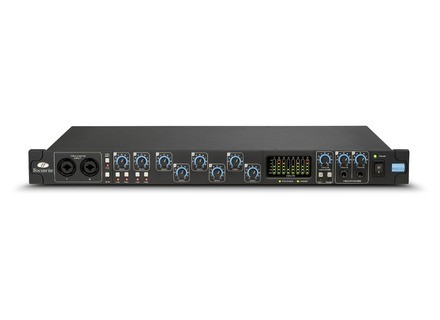 For the value you pay, this product is amazing.
one great feature is that you can later on attach another pro 40 to this interface and therefore have 16 pre amps.
Great Quality,
close to zero latency response if you are using live effects
Im still using it in my studio. it records upto 96khz

Focusrite Saffire Pro 40
4
We have the Focusrite Saffire Pro 40 in one of our studios on campus. We are using it with a set of KRK monitors on a Windows PC. The computer that it is installed on is running Vista, and it runs great with Vista. It has not given me any errors while using it and the drivers appear to be very stable on Vista (64) bit. This interface can and should be racked, it will only take up one rack space but it has all of the inputs you need to run a session.

When you use this interface you will also get some very good plug-ins from Focusrite that include some very good compression and reverb plug-ins that you can use as a VST in whichever DAW you have installed or want to use it with.

The preamps in this interface are great, I did not expect them to be that warm and clean. They are also very quiet and you will not even notice this interface is being used. It is very easy to set up in just about any program you want to use it with. But particularly in that studio we only use Cubase and Pro Tools. So for those two DAWS it works great.

As far as the make of this rackable interface, it is built to last. The knobs (there are only about 11 of them) are built well and are very easy to move. The mic inputs or instrument inputs are on the front of this unit which can be a plus depending on how your set up is. But sometimes with these inputs on the front of the unit requires the cords to be in the way sometimes. This would only be an issue at home though because in the studio this sits in a separate rack away from the actual workspace. I do recommend getting this for your home set up because it is not only great quality but it is affordable.

Focusrite Saffire Pro 40
4
The Focusrite Pro 40 is a 20 in and 20 out FireWire interface that has 8 separate preamps. There are two different headphone buses and it is compatible with Mac or PC computers. I was using this interface from August up until now and it has never gave me any problems running it on a MacBook or a Windows 7 computer. The Focusrite Pro 40 also does have room to be expanded if your 20 in and 20 out interfaces isn’t enough for you.

It comes with a few of Focusrite’s VST plug-ins. The price of the Focusrite Pro 40 is a decent price for the value of what you get with this interface. The fact that you get 20 in and 20 out for this price is amazing. Most home musicians will not need that many ins and outs and most definitely will not be recording that many simultaneously. All of the drivers are very stable and have never caused an issue. The latency is very close to zero, especially with it being that this is a FireWire interface and not USB makes the latency even closer to zero.

The Focusrite Pro 40 does allow for automatic switching between inputs. There are 10 digital inputs and 10 digital outputs. It does have phantom power for your condenser microphones and a resolution of 24-bit/96kHz. For the Pro 40 to be a 20 in and 20 out interface, it sure is pretty small.

It was very easy to install and set up, if you need help setting it up then the manual will have everything you need to get started and it will walk you through the process. The quality of sound you get with the Focusrite Pro 40 will surprise you , I could not believe that I was able to get this quality with an interface that cost less than 500 dollars. The preamps are some of the best that I have heard.

Focusrite Saffire Pro 40
4
I've had mine a little over a month now. I love it! I had read some reviews elsewhere complaining about latency issues and FW problems, etc. I put a Lacie FW400 card in my old Dell Dimension 3000 w a 2.80 GHz Pentium 4 and t works seamlessly, although being dingle core, the FW interface eats up more CPU than I would like. But that is no problem because it is so versatile as a mixer I just use it as an 8 channel ADAT expansion to my E-Mu 1212M card which gives me two more analog inputs with Pro Tools 190 HD converters. And that still leaves me 2 S/DIF channels.

I can run all that at 48K all day plus I have 2 channel direct zero latency monitoring off the 1212M and two different zero latency headphone monitor channels and a third monitor output channel giving me a total of 4 different monitor mixes as well as a variety of ways to mix them. And I can use the E-Mu-s 32 bit on board effects on all channels independently as inserts if I want to add saturation, color, tube simulation, etc., as well as really nice digital compression.

Getting started was easy!

Overall, its Clean, pristine, and with tons of dead quiet headroom! I went through two TrakMaster Pro's that had horrible noise issues above 6 on the gain control. I replaced them with a Studio Projects VTB1(which is actually also an exceptionally clean and useful pre amp for the money) that was much better. But the pre amps in the Pro 49 are what one expects from Focusrite. They don not color the sound they way a Never or other vintage type pres do, and they don't add tube harmonics. But what they do is give you a clean, very musical, very accurate transmission of whatever you plug in it. You can get all kinds incredibly realistic, relatively inexpensive (and even free) plug-ins to give you all the warmth and color you desire as well as compression, etc. (the included Focusrite FX bundle is actually pretty good...), or run it back out and through an analogue source after you have recorded the dry signal. Either way, you won't be disappointed! It has the quality and versatility of interfaces costing far more and is a steal relative to the OctoPre MK II w/o compression.

amandinemeloww's review (This content has been automatically translated from French)" well! even very good!"

Focusrite Saffire Pro 40
4
What characteristics have motivated your choice?
renomé the brand, having a 6USB on the PC of my man, and the number of entries output ....

For what purpose?
studio

Which instruments and systems (console, preamp, DTD ...) you use it and how connections?
a ADDA8000 (8in / out more)
BBE 482i a
DBX comp
Samson comp
Behr comp '
Alesis reverb
TC M300 and M350 reverb
some microphones

The drivers are stable?
yes very ...

Are they often updated?
not yet needed the update. there is a 3.4 when I drafted my opinion

What software do you use most often?
Fl studio
What you get lag?
1-2 Ms general, 3ms in / out

How many tracks you get record / playback simultaneously?
so much! really!

The installation is done it without problems?
no

Have you experienced any incompatibilities?
I had a Texas Instrument Firewire card. so no problem! I'm wary against by VIA, although Focusrite appoints as being compliant.

The general configuration is easy?
then it is less positive. I find the mix and the introduction of driver settings a bit complicated. map should be delivered with a preset stereo DAW, with all the IN / OUT routed directly.

The manual is clear and sufficient?
it is.

How long have you use it?
4 months
What thing do you like most and least?
as:
the in out
latency
price
coloring preamps

Cons:
only two XLR facade,
the 48 volt groups of 4
the drivers, and especially its CPU consumption when open (25% on my I5!)

Have you tried many other models before buying it?
Yes. the audiobox has an audio 1814 M, via the HD ... PT

How would you rate the quality / price?
perfect!

With experience, you do again this choice?
it is always the same: do if I had more money I premetrais not bigger? at least in this price range, I would do this choice (though I hesitate with Mackie thunderbird)
Did you find this review helpful?yesno
»
Read the 14 user reviews on the Focusrite Saffire Pro 40 »

View all 7 discussions on Focusrite Saffire Pro 40 »
Cookies help us improve performance, enhance user experience and deliver our services. By using our services, you agree to our use of cookies. Find out more.