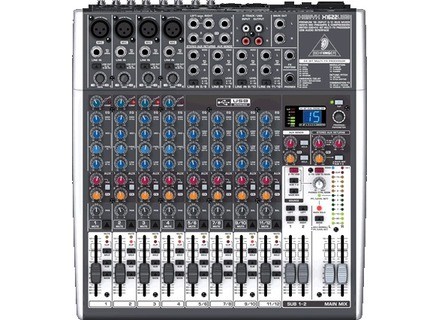 Xenyx X1622USB, FireWire/USB/mLan Mixer from Behringer in the Xenyx series.

Behringer Xenyx X1622USB
5
Rackable is everything comes with the console

there are 4 XLR and grafted

the manual is pretty well detailed

it is very easy to use

the equalizer is quite éfficasse

there is a very very slight hiss

I use it for 2 weeks

I'd tried plain yamaha and other behringer

Behringer Xenyx X1622USB
3
The features are no longer present, four mic channels with built-in compressor, 4 stereo channels, two starts (including one on the internal effect), a stereo bus, an ST interface in / out USB

A console everything more intuitive, except for the section / return that asks to look to find the correct routing

Sound pretty clean until we not turn the pots thoroughly (breath, loss of linearity). The équalos on mono channels work well, are not very useful on the stereo channels (not precise).

I was still pleasantly surprised by the great headphone that gives a broad spectrum (finally serious! Behringer had never been very good on this side of the headphone amplifiers).

Why did I put "average" here? simply because the stereo channels have flashed all at once: loss of income and large saturation. I remedied the defect by replacing the stereo preamp input transistor preamps homemade, and I have greatly earned! You should know that Behringer makes economies everywhere, even on capas decoupling: there is none. Result, the PDO input bistable go on (because they have more wired these PDO anyhow: a reaction against + input, we've seen everything!), And sent me the table of five or -5V DC on the input jacks. Same story on the effect module. (I had the same problem on three other aircraft behringer) So pay attention, produces very unreliable as it does not repair the mischief of designers!