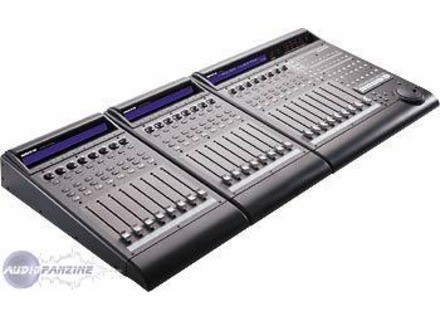 Glogerais's review (This content has been automatically translated from French)

In practice, it is a good "remote control".
Indeed, the edition of the tracks is much more intuitive ...
Recording is accde all functions of the software:
Arm the tracks for the sound audio, rglage level between dplacement in the project, control of Mark Punch (auto or not), etc ...
Finally a tool that makes us forget the keyboard shortcuts ...! ! ! ! !

In monitoring, ... It's rgal.
Everything is controllable. Volume at the Pan through the possibility to edit plug directly select each track ...

Possibility to customize the shortcut keys as you wish according to your needs the most common ...

Oh by the way! Do not think it is limited eight-track.
Indeed one eight physical tracks but with the Bank button you jump from 8 in 8 or 1 in 1 with Chanel.

Moral: the control XT (eight-track the extension) is not true intrressante given an award just infrieure the Control ...!
In short!

Whatever software you use (well a Socit shall decide to adapt the hardware for anything other than Pro Tools or Cubase) you will find a compagon game which you will want to stop!

Guda's review (This content has been automatically translated from French)

Mackie Control
5
It's stunning to see the faders move.

One small snag in Cubase, I think we can not save the movement of faders on several tracks but both may be I am wrong.

Aerodrink's review (This content has been automatically translated from French)

I use it for two months: it's a great product, pro trs, trs well thought out and worth every penny. I use it with Cubase SX2 and indeed it is in these conditions (mice unused 95% of the time) that the software (broadly defined, is not it, may be another squenceur) takes really its full dimension in the sense ergonomically.

The finish is perfect, the blue LCD is the most beautiful effect and what about Penny & Gilles faders that are really gniaux (see below). If I wanted to quibble I would say that the buttons play / stop / etc. who click-click buttons to make me think of the old IBM keyboards: it's the only thing that makes a little "cheap" on the device, but it's so dtail compared to the input!

To give an ide of using the BTE in SX:

- CONTRL tracks by Mackie are those that are visible in the console VST (ie if you move a piece in "cache", it disappears from the screen + mackie at the same time)
- Track names appear directly above each slice on the LCD (gnial!)
- If you change the order of the slices in Cubase, Mackie makes the change directly (by reversing the positions of the corresponding faders)

Moreover, given that it is impossible as Cubase change the track order Fawn totally free (eg 1: 2 Audio: VSTi 3: VSTi 4: 5 Audio: Rewire 6: 7 VSTI: Audio 8: Rewire etc..), it is essential to spend only by groups.

Thus, for example, I made a 24 track setup groups in SX: displaying only groups under the console, there are only groups that appear on the Mackie and suddenly you put the order that you want. This fawn is gnial in use: one can completely from reorganization of the slices being components: the faders with automation start automatically updated on the Mackie, and the names of the tracks on the LCD!

However, it remains a bug, even with the latest OS from Mackie: LEDs "signal" have an activity that does not match that of the slices. This would be a problem inhrent SX that would not transmit the correct values ​​of Mackie. It was not until a future version of Cubase for this bug has been corrected.

A note on Penny & Gilles faders: a little Drout to beginners because they are touch-sensitive faders, if for example you touch a fader with your finger (without the fader moves, for example, it is calculated at the bottom ) Well the mackie sends MIDI! This is reflected in the fact that if you're having fun moving faders with nails, they return to their original position cis! In fact if you move the faders with anything other than cis fingers they recover their position on Previous! This is to avoid accidents during the mix like I push my sheets on my desk and I lose my last mix. This means jusqu'o they pushed the DLIR in Mackie! (Such as pasque Whereas hyper handicapping is on an analogue desk, as in our case we return the worst dernire the backup). I wanted even when prciser because I put a sional understand!

Finally: you can accder all: EQ, insert, FX, choices and their VSTis paramtres / presets is finally Sidr permeability with the software of your choice.

TO BE AMONG ALL HANDS! In short I highly recommend all users of Cubase SX and other squenceurs to sell your old machines that you no longer use SAVE for the 1000 euro (used) that cost the machine (nine euros in 1300).

Apart from the small ppin LEDs on the edges that do not correspond to the channels - and the problem comes from Steinberg and would be for the next update rgl power in May - this machine quickly becomes indispensable for passing on it. Make music with your ears and not with your eyes (yes, you can not adjust the levels, for example the mouse without looking at the screen).

manu63's review (This content has been automatically translated from French)

Mackie Control
5
I have the mackie CONTRL since almost a year but I have the audio version dedicates logic is just great! I had no problem to connect and every imaginable automation are easy to CASC, it's really a good product I am happy.
The only problem that is important is the price a bit high I got.

Did you find this review helpful?yesno
»
Read the 5 user reviews on the Mackie Control »

See all 56 photos of Mackie Control »