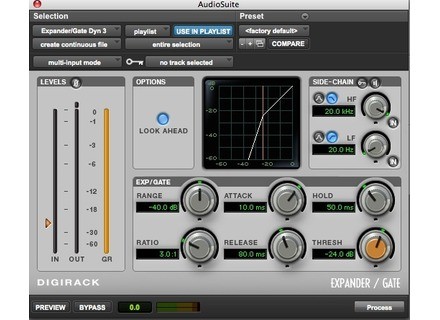 Digidesign DigiRack Expander/Gate
4
We use this compressor all day at our facility. I like it as a second compressor in the chain. It does have a harsh compression and I use it on everything again, as a secondary compression. I like this unit for more of a limiter use opening the attack up to let the sound hit initially and then grab it with a light 3:1 to 4:1 ratio. My students all use this in their audio classes and love it. It can sound a bit harsh if you over compress or use a hard hitting snare drum or kick drum. I think it sounds a bit loose at about 50hz on Kick and does not tighten the kick but rather over compress the sound and make it a bit colored. To avoid this just pick the right instrumentation to use this compressor on. Use it for vocals and you can start with the presets the factory sends when you purchase. It is a bit to compressed but it is a good starting point and should be good for you to get a basic idea of how this compressor works and how much gain reduction you can use without sounding to effected.

It works great and has not issues with any playback engine issues. I have used it for years and it works flawlessly. I use on IMAC, LAPTOP, DUAL LAPTOP, QUAD LAPTOPS. If you are running about 32 or more of these it can bog a slower PC or Dual Mac or IMAC down a bit but in that case use it on a group or an aux send and return. I use group compression for my room mics so that I don't bog down the processor if I am having any problems with latency or if I am not running on an HD system. I find it stable and only if I am on a slow computer does it have any issues at all. I like using the attack more than I use the threshold. The attack is smooth and is really quick to grab the signal but not in an obtrusive way and not in a way that you can hear like a bomb factory 1176. I like the fact that these come with the install pack but I do think that it is best used with other compressors not alone. I don't use this plug in just solo rather I use it in conjunction with others. I normally pull this up in conjunction with a Bomb Factory or the SSL and I use this for more of a limiter rather than my main compressor as when you hit it with level it can sound a bit processed.

I like it and it comes standard with any pro tools bundle for free. I don't think you will find a better compressor as an included compressor. Like I said above I think that if you want to use as a limiter not as your primary compressor then you will love it as the second in the chain. I like this unit but it is not my main compressor when it comes to vocals or snare. I do use it some times on my bus sections but I do not use it all on the master fader. I have some students that put this on their masters and that is not a good idea it is not a stereo buss compressor.
Did you find this review helpful?yesno
»

I run Pro Tools on a Apple Macbook Pro 2.66 Ghz i7 Dual Core 4GB Super Drive system. Pro Tools has always run great on my system and of course so does the DigiRack Expander/Gate Plug in. There is a small bug when using the DigiRack Expander/Gate plug in, and it has always been a problem and I don’t think they have ever corrected it. The Ratio Slider flat out does not work, you cannot change the Ratio Value. The Ratio Value is always stuck at 100:1 and will always be at that ratio. Many of use have tried to contact the company and they were aware of the issue. Maybe it has been corrected if you have a newer version of Pro Tools.

The DigiDesign DigiRack Expander/Gate Plug in is a great free edition for a Pro Tools user. It includes some really good low and high pass filters as well as all of your parameters like release, threshold, attack etc. There really are no other models of Expander/Gate plug in, this is really the only one that is standard with Pro Tools. I hope they have fixed the Ratio bug by now or atleast in the newest versions of Pro Tools. This was a huge issue from Pro Tools 5.1. I am happy that the Digidesign DigiRack Expander/Gate comes with Pro Tools though, it has very useful tools that every engineer has to have. It would even be worth the money if I had to pay, I would still purchase it.

Digidesign DigiRack Expander/Gate
4
Digidesign's DigiRack Expander/Gate is a plug-in that comes stock with Pro Tools software. You don't need to install anything once the Pro Tools installation process has been completed as it takes care of installing all of the DigiRack and other free plug-ins during this process. As far as the interface goes, it has the same look as the other DigiRack plug-ins. It consists of parameters for range, attack, ratio, release, hold, and threshold, which all can be used either as an expander or a gate depending on how you set them. It also has a sidechain with both high and low pass filters, and graph to show your work. Lastly the Digidesign DigiRack Expander/Gate has sliders for input and output levels. A manual isn't made for this plug-in as far as I know, unless they talk about it in the Pro Tools manual.

I am currently running the Digidesign DigiRack Expander/Gate plug-in in Pro Tools LE 8 on a Mac Book Pro that has a 2.2 Ghz processor and 4 GB of RAM. I also used to run it in Pro Tools LE 7 when I had it before I upgraded. I run Pro Tools LE with a Digi 002R audio interface. I'm not sure how far back this plug-in goes in older versions of Pro Tools, but I believe it goes pretty far back - at least far back enough that almost all current Pro Tools users should have it in some capacity or another. I can't say I've ever had an issue in terms of performance with this plug-in and I don't believe that most users will have one either. If you have Pro Tools and this plug-in, I'd recommend just pulling up as many as your system will handle to get a good idea of how many you'll be able to run at a time.

It's definitely nice to have a plug-in like the Digidesign DigiRack Expander/Gate come with Pro Tools, but I don't find myself using it all that often since I've got other plug-ins that I've bought that I'd rather use. It definitely doesn't sound bad at all - in fact it's quite usable. I'd say that it is most useful for new Pro Tools users who may not have other plug-ins to work with. Even if you do have other plug-ins like I do, I find that you can never have enough plug-ins, so having a free one like this around is never a bad thing. I'd encourage all Pro Tools user to take advantage of this plug-in, or at least give it a shot.
Did you find this review helpful?yesno
»