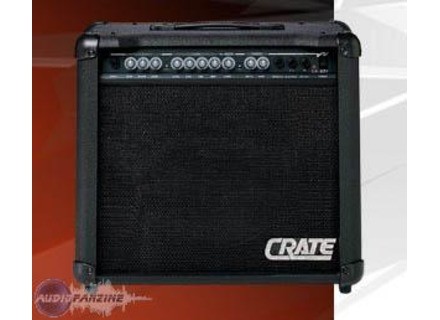 Crate GX30M
1
I ordered this amp off of eBay for $45. I saw it while surfing the wonderful world of eBay. I was here quick and it was a graduation gift from 8th grade.

I like the styling of it. The clean channel sounds very nice. The foot pedal is a nice handy feature. Its thirty watts with a 12" speaker. Its nice for a practice amp. Has a good reverb sounds and has decent corus too. Good for a beginner!

I don't like the distortion channel. Its has a certain feedback to where when the channel is switched to the distortion, there is a buzzing. It can only get loud to a certain point before it loses the quality of sound it doesn't have.
If you don't have a peddle or the peddle isn't hooked up, the buttons to swtich channels are really tiny and kinda suck ass alot. It doesn't perform as well as it should for being a heavy pain in the ass to carry.

Its built solid. It is open in the back so its not a sealed enclosure. The turny knobs for all of the settings are really easy to use. The GX-30M has a nice handle and a spot in the amp to hold your pedal. Really durable.

For a starting guitarists, its is a great amp. Anything past that, it loses its majesty. Not a great fan, but I guess you get what you pay for. I'm upgrading to a Marshall when I sell my arm or leg, or both.

Crate GX30M
4
The Crate GX30M is a solid state electric guitar amplifier with a single speaker.  Like the name states, it delivers 30 watts of power and also contains effects like reverb, overdrive, and chorus.  The amp has 1/4 inch connections in the front for your instrument as well as for headphones and for the foot switch that comes with it.  The foot switch has two buttons on it.

The make up of the Crate GX30M isn't too hard to follow overall.  The amp is broken up into a few sections - overdrive, clean, and chorus.  The overdrive section has parameters for gain, shape, and level, while the clean section has knobs for level, low, mid, and high EQ.  There is also a knob for reverb and a section for chorus that has parameters for depth and rate.  Everything here is really self explanatory as there isn't anything out of the ordinary here.  I've never seen a manual for this, but even if you have minimal experience with guitar amps I think you'll be able to figure out this amp on its own.

The sound of the Crate GX30M is about average in terms of its clean sound, but the good part about the amp is that it is versatile.  You've got the ability to get overdrive, clean, reverb, and chorus tones.  I believe that the reverb is a real spring reverb, and is probably the best feature of the amp.  I'm not a huge fan of the overdrive as it comes off a bit tinny for my taste, and the chorus is overall pretty cool sounding.  While I wouldn't use this amp for recording, it is definitely suitable for live shows and for practicing.  This is the perfect amp for those who are looking to experiment with effects but who don't want to spend the money on external effects.

Overall, the Crate GX30M is a nice little amp.  It definitely isn't the best sounding overall, but where it lacks in tone clarity it makes up in versatility.  These are also very reasonably priced if you can find one used and they are no longer being made.  I also believe that there are two slightly different looking versions of the amp, the earlier of which is the one that I have.  I'd recommend the Crate GX30M for anyone looking for a cheap amp that isn't big and has the ability to get a variety of different tones inside the box...

Crate GX30M
4
This amp is solid state all the way. Not sure of the wattage, but I would say, judging from the volume, that it is about 30-40 watts. This amp has two channels, drive and clean. The drive channel has gain, shape and volume controls. The clean channel has master volume, treble, bass, and mid knobs. It also has a reverb knob that controls both channels. There is a manual channel switching switch if you don't have a foot-switch, which I don't. There are rate and depth knobs for chorus as well as a manual switch to engage it. Finally, there is a speaker out, headphone out, as well as foot-switch input.

This is your standard combo amp. The setup/configuration is simple enough that you don't need a manual in my opinion. I bought this thing used, so I don't have one anyway. Though I am not sure about the wattage, the amp is sufficient for rehearsals and even from small venues. It can also drive a 4ohm cab fairly nicely ! You have to tweak the amp a little bit because of the mediocre tones that come from it (see next section.) But pedals can help.

I bought this amp to rehearse and play on stage that upcoming Sunday because it was cheaper to buy it than rent an amp for a weekend. It does the job and has done so for more than a year. It's just that I've since bought better amps, so she might get sold soon. Both the stock clean and distortion channels are OK. The clean is passable, but the less than exemplary built-in chorus effect does not improve the tone any. The distortion is also passable. Kind of boxy sounding, but some people like that. I think it has it's place. The good news for me is that the distortion with gain all the way has enough sustain that I can keep up with our other guitarist and his much more expensive Fender Hot Rod Deville when we do &quot;call and answer&quot; solos. I play through a beginner Ibanez and many pedals, including a Zoom multi-effect. If I put the Zoom on the Fender Twin setting through the clean channel of this amp, you can close your eyes and think you have a Twin right beside you! That's a pretty good thing. The amp takes pedal distortion OK as well, especially put through a 4 speaker cabinet....you've got a stage ready rig for not much dough !

I've been using this on stage (recently as a second stereo amp) for a year and a couple months. It is light and portable, so it's convenient for rehearsal and stage. Unfortunately, the volume, while being adequate for more than a year, is recently getting to not be adequate. With our other guitarist's loud Hot Rod and our monster drummer, among other things, my virtuoso playing tends to get drowned out when I use this amp. Thus it's use as a stereo amp. But now I have other ones that I feel are better. So I didn't really try many others before trying this one (remember, I needed it quick), but I have sure tried many (and bought a couple) since. For being bought around the 100$ range and being in great shape when I bought it, I think this amp serves it's purpose well. It's still in great shape and still plays well. I'm sure if I had more time, I would have found something else better for slightly a couple more bucks, but I don't regret buying this amp. I am trying to sell it now, but it won't hurt my feelings if I had to keep it.
Did you find this review helpful?yesno
»