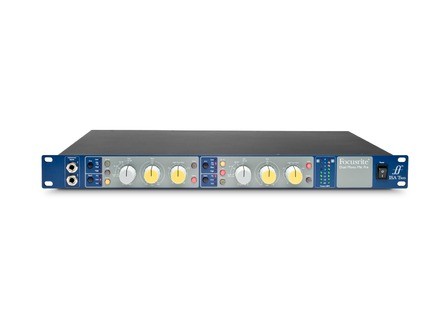 ISA Two, Solid-State Pre-amp from Focusrite in the ISA series.

jctroyes's review (This content has been automatically translated from French)

Focusrite ISA Two
5
- Model 1u rack famous ISA110 (and console that came with it)
- Gain a primary selector (a big plus)
- Lundahl input transformers
- DI, balanced insert jack, setting the Peak meter dBfs to conform to the standards of the studio (usually -18dBFS in France).

The buttons are quite large which is very agrèable and is reminiscent of the original ISA110. The volume knob after the gain seems a bit légé but nothing serious given the price.

Clear although a little color to clearly identified online micro level would Silkscreen was a bonus. White on gray not always easy to read in some studio with soft lights.

Level Meter in dBfs for analog is a good idea and not household communications. From a visual point of view it's not RTW but hey it keeps one eye. AND it's so rare that a manufacturer integrates ballistic on his little preamp that I am delighted !!! CONGRATULATIONS AND THANK against the system by adjusting screws on the front with a true precision screw would have a pro anything.

You know, I think that on this point the ISA series suffers a bit of a bad press. The testes and some opinions diverged and reproaches him Souvant a lack of character. Yet Focusrite never promised a Neve 1073 or such ??? Certe ISA 110 Series was built with the help of Mr. R.Neve (at the time) but it is not s why we must have a sound typed hyper!

I very objectively At the present moment I have this machine in the middle of a Neve 1073, and Chandler TG LTD, Trident S80 ... So a lot of rather special machines. ISA gives me a real sound alternative to most is the one among these machines can get a great sound of a simple dynamic microphone. When I plug a microphone above it for its quality and the resulting sound not out of spite.

Great accuracy and consistent across all frequencies. Sober and not just fault excessive nervousness in the high end (like some machine transistors price equivalent).

The report qualitée price is really extraordinary and more in a price range pretty well thought out.

The little nothing magic that may be missing in the sound is reflected in the concurrency at more than twice the price.

Essential studio and a true qualitée design, and sound like the comparison with machines twice the price.
To be in addition to other machines character but also as single preamplifier GETTING STARTED.
Preamplifier will you get the best out of a simple dynamic mic and frankly anything that ca !!!

CONCLUSION:
- Maybe not the best place to make a voice naturally out of a mix
+ Parfais taken for acoustic piano / strings / winds, overhead and backing with static
Ideal ++ and near-equivalent with dynamic close micking on percussion, snare and toms
- DI does its job but nothing more
- No option malgrés Digital level meter dBfs

Listen to the 19 audio files about Focusrite ISA Two »