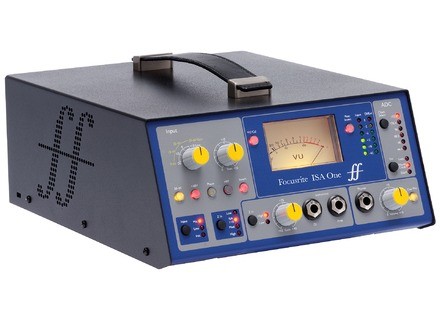 ISA One, Solid-State Pre-amp from Focusrite in the ISA series.

View all offers for Focusrite ISA One »

Focusrite ISA One
5
The Focusrite ISA One is a single channel, solid state microphone preamplifier, modeled after the vintage style Focusrites. It's an all analog piece of gear and has more connection options than you'd ever need in terms of connections, including separate XLR mic and line inputs, as well as a 1/4" line input, digital connections in the form of word clock and AES/SPDIF. It also has an XLR output for both a DI and a main output in addition to 1/4" cue and insert sends. There are 1/4" connections on the front of it for using the ISA One as a DI, along with a connection to send to an amplifier and for plugging in headphones. The casing is a unique box with a handle, meant to sit on your desk, and isn't rack mountable.

I wouldn't say that the Focusrite ISA One is hard to use, but there are a lot of features available that one should be aware of. For setting your input level, there is a main fixed level parameter to get your initial level and then a finer trim knob for getting more exact levels. The fixed gain knob also has a corresponding button where you can double the amount of gain used, serving as a pad when not engaged. There is built in phantom power, a phase button, a high pass filter, and controls for assigning your input and impedance. You can also set your headphone and DI levels with separate controls. A manual probably isn't necessary but could be useful if you're looking to use all of the features available here.

The sound of the Focusrite ISA One is super clear and is definitely one of the best sounding Focusrite preamps that I have used. It sounds similar to an API preamp to me, but has a lot more features to work with and is even a bit cleaner than that. It's very transparent and provides a pretty accurate picture of what you're recording, although personally I prefer a thicker sound like you'd hear with a Neve. Still, the ISA One is a great sounding mic preamplifier.

The Focusrite ISA One is a great choice for those looking for a very nice single channel mic preamp with a lot of the amenities that you won't often see in a single channel preamp. The sound is great but the price is the best part of this, as it's one of the most complete preamps that you will find for the price. Definitely worth a test drive for anyone in the market for a single channel preamp for their home studio on the cheap without sacrificing options and quality.

xbassman_K's review (This content has been automatically translated from French)" At this price, hard to beat."

Focusrite ISA One
5
In short, this is a pre-amp transistors which enjoys a very good build quality (I even opened out of curiosity to see), well equipped and very clever at the possibilities of connectivity, full and strong at its controls. Part DI is excellent and very well thought out as it allows re-amplification is rare enough to be noted.
I bought the version with the A / D option is identical cards équipants other racks ISA series, very professional and impossible to fault. I highly recommend this option if you will be using in conjunction with an audio interface and low midrange equipped with S / PDIF or ADAT (type Digi002 as is my case), because it does a much better job at the analog / digital conversion.
My only regret: I would have appreciated the presence of a small compressor of the same ilk as the pre-amp section on this machine. That said, as it is equipped with an effects loop (bypassable more!), It is always possible to add (or anything else for that like a reverb or EQ) ... Ah! And a rack version was not too bad.

The manual is clear and very complete, everything is detailed. So the grip is also quick and easy.

If you need a pre-amp that colors, this is not the place to look! I personally bought just for its transparency, but its absence is almost the same breath when pushed (which is very rare). If indeed it is used with good microphones, it will make a perfect job. It has the possibility to adjust the input impedance, which is very useful when you have microphones ribbons for example ...
Part DI is one of the best I've seen so far (along with the Mindprint Envoice Mk I), you can forget the very expensive Avalon U5 is IMHO worse and I could resell the same time!

Purchased in England and pay for £ 439 (roughly € 549) to replace a Mindprint Envoice Mk I out of breath and overcome the poor performance of preamps and conversion of my Digi002 to the extent possible, and especially critical for decision (vocals, guitars, bass).
Before making my decision I have tried a few other models in this price range (TLAudio, JoeMeek) or more expensive (AU 610), or less (Golden Age Pre73). Although I found the Golden Age quite surprising, and AU 610 excellent, none of the two only had A / D converters, or the same flexibility in connectivity. As for the other two, they were clearly not at the same level ...
After some 10 months of intensive use, the results are more than satisfactory, and in this price range it is unbeatable in my opinion, whether made under the sound of his clever versatility, or its general characteristics. Quality / price excellent. I would do this choice without a doubt.

27 of 27 people found this review helpful

jeff 7 adore.'s review (This content has been automatically translated from French)" Just perfect!"

Simple config, everything is in the manuel.L advantage is that you can choose between several impedances.En more they added a triple switch.Donc everything can settle: acifs instruments, passive, with direct input amplifier, or a micro direct.Derriere ago, an HP output jack, a microphone XLR input, line input jack and an input and an output xlr.une insert jack, an input and an output jack Cue, a calibration of the saw meter, a meter calibration peak LED, an IR input and output power switch is also main.Le derriere.jack.
On the front: 4 to 4 potars.Un impedance setting with a small button below to change scale in 10 db.un trim setting from 0 to 20 dB, a low and high impedance regloge next to jack jack e instrument and that of the amp. There finally making a csque jack with his volume knob. Finally a series of small buttons that switch several ultras practical functions.

Transparent, absolutely! The sound of the voice is reproduced parfaitement.Il can provide gain and assayed in all the configurations.C is to say that whichever the need to gain.

Everything is said in other reviews technically parlant.Je looking for a transparent preamp, that there is a SSl probleme.Alors without going there, for the price there is not mieux.J 'have a more colorful this one, Hearing BB Blach bundle with eq and comp .. With the two I did what I want as the song goes!
I work for or not for Focusrite ToToM but really you can buy with your eyes closed when you need a preamp with any fine adjustments possible (without the optional A / D converter, the normal price: 535euros, but at 439 Toto for example with the A / D is: 649.442 Toto at the moment.
I put three pictures of the inside of the beast, overlooking the transo Lundhal.Une view of the internal power supply, another meter on the top view!

Yohanmusic's review (This content has been automatically translated from French)" Simple and effective!"

Focusrite ISA One
4
Analog transistor preamp / Mic and Line in the back / front panel DI / Mic can be registered (or Line) and DI at the same time / No effect or compressor ... it does just amplify the sound.

I use it for recording: voice with an Oktava MK-105 and low, with a SansAmp bassdriver.
I did some testing times guitar amp but not enough to rate a "goal"

For my use, I am very satisfied! This amp is powerful and offers a very clean (clear), to my ears it does not color the sound.
The first 3 songs on this link have been registered with the preamp (for bass and voice): http://fr.myspace.com/room2service

I use it for over a year, I have not tried other preamp apart my old Edirol FA-101. The price / quality ratio seems good but have virtually no experience in this type of product, I will say no more ... Except I do not regret my purchase!

Did you find this review helpful?yesno
»
Read the 5 user reviews on the Focusrite ISA One »

See all 296 photos of Focusrite ISA One »

View all 3 videos of Focusrite ISA One »

Other names: isa one, isaone, isa 1