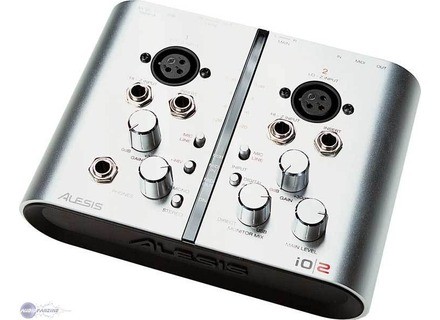 iO|2, USB audio interface from Alesis in the iO series.

the drivers are very stable on pc (vista, xp) and mac.
I used the with Nuendo and Logic.

no problems with installation, configuration is a breeze.
jacks speaker outputs monitoring, the séarées headphone input, the ability to listen to the direct or digitized sound, or even a mixture of both are very significant.

For a small budget, it is very bien.Il should be recognized that the built-in preamp is not powerful enough for mobile use outdoors.
an external preamp is absolutely necessary, the phantom power is very bad, a lot of breath, one can however record a guitar, bass or other as long as the input volume is powerful.
with an external preamp, one can appreciate the quality of the converters.
the sound is very clean.
I put this note in view of the quality of the input and converters, stability ...

another weak point though: usb connection on the sound card is fairly loose.
for mobile use, c is quite fragile.
Did you find this review helpful?yesno
»

Alesis iO|2
4
The Alesis iO 2 is an interface that can be used for your pc or your mac I have used it on both platforms several times and it works great with both and I didn’t have any problems on either system. The interface is very portable and can be taken anywhere, its very small and compact. It is perfect for the person who travels a lot and still wants to do some music while they are gone. It is a 2 channel recording interface, and has a place to put headphones and a place for monitors if you have them or want to use them. So when I was out of my house I would use headphones with the iO 2 and when I was home I could hook up my monitors if I needed to. It records up to 24 bits and will work with pretty much any DAW that you are using on your pc or your mac. I have used it in several different programs and each one of them it worked great in.

The quality is great and it has 48 volt phantom power on board, it is also USB powered not fire wire so you will def. be able to use it on your pc. You wont need to plug it into a wall jack for power because the USB port provides the power.

Drivers haven’t been updated since I purchased it, so I am not sure if it has even updated at all.

Overall, it’s a handy neat little device that will take care of your recording needs. It was exactly what I needed and I recommend it to a lot of other mobile musicians.

Alesis iO|2
4
I bought an Alesis iO|26 a couple years ago and after being very happy with it I decided to buy the portable version of it. I mostly bring this interface with me when Im traveling and want to capture an idea or a weird nature sound. If you a songwriter this can be a great item to own.

First of all, I really like the look of this unit. Very simple, clean and modern. Knobs are firm and precise, the XRL and ¼ input make sound capturing easier, since you can just plug in your guitar and record (I usually use a peace of software, like Guitar Rig, to simulate amps and room reverberation). The two 1/4 inserts also facilitates signal processing. I also love how it comes with a led input level indicator.

The only defect is sometimes you have to give all the juice to record a decent strong signal on your DAW. It happens every time I record my bass direct.

Very well built interface, I have it for awhile now, it went through a lot already and still work as new. Here are some of its features:

Great interface for a very reasonable price. Nice look with a modern and clever design.

I liked the format... but I was afraid of the USB interface.

(Up to this day the system has worked without a hitch with less than 6 ms latency.)

Did you have any problems during the installation?

Serious driver and device detection problems (audio USB device instead of Alesis io2...) even after formating and reinstalling...

I turned out it was a problem with the audio driver of my Logitech web cam, but even after uninstalling and formating I couldn't find a solution.

That's the reason why I give it a 0

Not even the drivers from Alesis' website solve the problem.

Did you have any incompatibility problems?

How complicated is the overall configuration?

It couldn't be easier... except for the driver detection problem...

Is the user's manual clear and comprehensive?

Lousy driver... I think Alesis should seriously work on this driver problem...

It's a pity because the device sounds very good... but the latency is much too high!!!!!!

There is only one driver version available on the website.

Which software do you use?

What's the latency of your system?

How many tracks can you record/playback simultaneously?

With Reason: three tracks... with more tracks I get noise and system crashes. That's the reason why I increased the latency time to at least 25 ms to get a clear and clean sound.

One week and it is already too long...

Which feature do you like the most / the least?

I don't even want to answer... The USB port is becoming an interesting interface for audio applications but it won't ever replace a PCI solution (no cable: the sound card is directly connected to the mother board and the CPU)

Did you try any other models before buying it?

How would you rate its value for money?

I can't answer this question... It's was a very bad experience...

Or I could say what I've read in other user reviews:

this sound card has a very good value for money.

But if you plan to use it with your DAW I strongly advise you against it.

The driver is a pity.

Never... I had always been very skeptical of USB sound cards...

This device was recommended to me at my favorite shop...

That's the reason I brought it back to the shop and had it replaced with a PCI sound card.

I DON'T UNDERSTAND THE STUPID TREND REGARDING USB SOUND CARDS...


Did you find this review helpful?yesno
»
Read the 36 user reviews on the Alesis iO|2 »

View all 7 discussions on Alesis iO|2 »
Cookies help us improve performance, enhance user experience and deliver our services. By using our services, you agree to our use of cookies. Find out more.