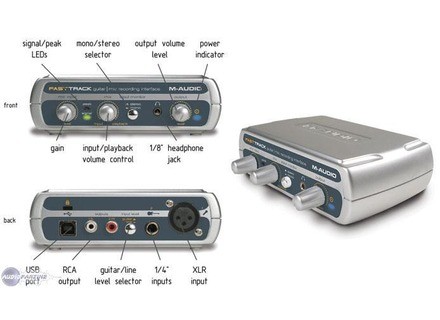 M-Audio Fast Track Usb
4
The Fast Track from M Audio is one of the most popular interfaces they make because it is probably the most affordable ones and it is great for someone who is looking for their first interface. I was using the Fast Track about 4 and a half years ago and still have it to this day. It has held up well over the years but I just don’t think that it has a good enough preamp for me to even bother with it now. This interface only has 1 preamp and it is a 2 in and 2 out interface that can be used with either a MAC or PC.

Setting this interface up is extremely quick, installing the drivers takes no time at all. I am not sure if they are still coming out with drivers for it though since it is so old now. But they probably have since there are so many more machines and OS out now than there were a few years back.

The microphone preamp on the Fast Track is not very good, and the knob on the front is not very well made. This whole interface is very cheap feeling and light but it will give you a decent recording quality. It also comes with Pro Tools SE which is a basic version of Pro Tools but it still has a lot of VST instruments that comes with it.

I remember trying to configure this interface to work in FL Studio back then and it gave me some problems. But when using it with the Pro Tools SE that it comes with gave me no issues at all. There are some pros and some cons to this device but if you need a good preamp then this is not the interface for you. You will need to spend a little more money to get a better preamp. This interface only cost about 150 when it first came out and it is even cheaper now.
Did you find this review helpful?yesno
»

M-Audio Fast Track Usb
4
The M-Audio FastTrack is a compact, single input USB Interface for connecting an instrument or a microphone to your computer for recording. It's silver and black.

Purchased in 2007 at BestBuy. I was looking for an inexpensive USB interface to allow me to get guitar, bass and keyboard signals into my PC. $99.99 including some basic recording software.

The FastTrack is easy to use and very intuitive. Controls are simple: on the back panel, a single 1/4' input with a switchable guitar/mic button, an XLR jack for microphones, left and right out RCA jacks; and a USB out jack. On the front panel, a mic input level control, a mix control to blend live and recorded playback signals; stereo/mono pushbutton, 1/8' headphone jack; and an output level control. Setup is simple also: install the driver from the included CD, then hook up the FastTrack to a USB port.

Input level isn't the highest: In most cases it can be difficult to hear what you're playing unless you boost the signal before putting it into the FastTrack. Mic level seems to be better.

The FastTrack is solid, but I wouldn't call it rugged. the plastic case is designed for home use, though, so it's not a big problem.

For the money, the M-Audio FastTrack is a great deal for anyone who wants to start recording basic tracks quickly. The studio software included with the unit I bought was quite basic; new FastTracks come with Pro Tools M-Powered Essential software, which is a step up. The FastTrack box itself has been redesigned, putting all inputs on the front panel and making the three control knobs larger and moving them to the top of the box. The XLR mic input now also includes phantom power for condenser mics. The unit now also has a direct monitoring feature designed to solve latency problems.

M-Audio Fast Track Usb
3
This was a super simple mic pre that M-Audio had sold for a bit for those looking for the bare minimums when it came to recording things. You have a gain knob, an input knob, mono/stereo button for monitoring your source, output volume knob, XLR input, 1/4'' jack input, guitar/line level selector, RCA output and USB. Really, this thing is about as bare as you can possibly get.

The device did alright. There aren't many features packed into this thing. It seems like M-Audio tried to get away with as little as possible. In fact, I'm not sure why they didn't just combine the XLR and 1/4'' into one jack to make it more convenient. Presonus did that with their Firebox, and it worked out perfectly fine. The USB is the biggest killer in this. It's USB 1.1, and there is some very noticeable latency once you start recording. For those that don't know, latency is when you play something on your guitar and you hear it a few milliseconds later. It can really mess up your playing because it's impossible to keep timing like that.

It's super simple to set up. You just install the drivers you need to install, hook up the devices to their corresponding ports, open up your DAW, select the device in your preferences and you're ready to start recording. The device can work in quite a few DAWs out there, so you should have no issues in terms of compatibility for most of these, but it might start to lose support now that it's discontinued. I can't comment on the manual as I never read it. The device is simple enough to where you don't need to read it to set everything up.

If you are on a super tight budget and need something crazy cheap, this might work out for you. Keep in mind that it's USB 1.1, so you'll have to be running everything very bare when using this device. You can't have plugins running while using this or else you'll experience latency. I wouldn't pay more than $40 for this, personally.
Did you find this review helpful?yesno
»

M-Audio Fast Track Usb
4
I got the FastTrack about a year ago and I was impressed with the quality for the price. It isn’t the best interface, but I’ve recorded clean vocals with it using a $100 mic. I originally got the FastTrack just to connect my monitors, which worked out great, but when I got a mic and the interface handled that pretty well I was happy with my purchase. Obviously there are better interfaces out if you spend more, and you can’t really expect great preamps from a $150 interface, but for the price it was a good buy.

The FastTrack makes a good soundcard if that’s all your going to use it for aswell. I get low latencies with it. I know that my computer is the one holding me back when it comes to that, and not my interface. My monitors connect well to it as well and setting it all up was pretty easy.

My only complaint with it is that it only has 1 headphone jack. I know that feature is pretty standard at this price point but I have to remedy it with a splitter cable so the artist and I can both hear what’s going on when recording.

Follow the manual and you won't have a problem setting it up. It was my first interface setting up and I didn't have a problem. Will work with PT M powered and every other DAW / Computer. It's easy to set the buffer setting except for the fact that you'll have to change soundcards right before you do (which is easy in FL) because if the soundcard is in use the buffer won't let you change it.

Overall, for the price this is a good interface or soundcard. It does the job well and has never given me any problems. I’d recommend it.
Did you find this review helpful?yesno
»
Read the 18 user reviews on the M-Audio Fast Track Usb »