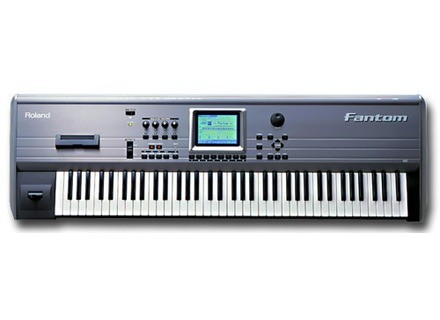 Fantom FA-76, Workstation from Roland in the Fantom series.

Roland Fantom FA-76
5
I acquired the gear in Italy (I am Italian!!), because I needed a new synth, as I have been using a korg M1 and a Korg 01 for several years.
I stated to keep the M1 (old but always cool) and replaced the 01 with a fantom.
I paid about 2000 Euros.

First of all the presets....more than 1000 sounds with lovely pianos (I am a pianist!!), beautiful organs,synthbrass,etc.
A powerful effect section, a 16 track integrated sequencer, the Arpeggio mode.
The editing is very easy to use as you can draw the wave shape and keep under control all the parameters.
The real time editing: 4 potentiometer and 4 buttons that together with infrared beam allow you to modify the sound while you are playing.
The mechanics...the 76 keys are OK, dynamics and aftertouch are on top of level.
Finally I like the strength of the keyboard, It is strong enough to support accidents that always occur up and down the stage.

Maybe a touch screen monitor would have been useful in live situations, when you have to change quickly a preset or an effect.

Absolutely good.
The synth comes in a light grey metallic "case", that makes you understand its strength. The potentiometer have a smooth and precise motion.
The buttons on the panel are big and strong enough to be "hit" suddenly and several times without break.

I think that the Roland Fantom is a good gear for studio music and for live sessions.
Its price makes it actractive for a lot of people.
The absence of a built in sampler (in reference to korg triton, for example) is not a problem, I mean that if someone needs a sampler simply buys a sampler and not a workstation with a sampler!
If I got it stolen I'd probably buy another one.

A really great compromise for performance and Sonic Exploration without dogging you down to hundreds of adjustments. As a Triton owner I have been slowed down in my quest for the ultimate toon do in part by endless programming requirments. Sometimes you need to just get to the board and start recording. Don't get me wrong this is still a deep board and you hear it on many many patches. Roland took a long hard look at how to compromise without killing a "Workstation" and suceeded! great balance. the sounds for the most part are prestine and uncolored. The depth is too much to touch on in this review but the "matrix" control is a really feature for adjust a lot of perameters at once with little effort. Construction is EX. Keyboard feel is very good. Sofware Updates are a breeze. Four Stereo samples per patch can be scary to listen to. Your ears are ready for some great sounds. Easy to construct totally new sounds very fast.
64meg of waveforms to start 1083! Three boards to add 2- SRX 1-JV for over 200meg!
For the Dollar this a impossible to beat.
Thank you Roland.

Well... The Pitch Bend / Mod lever is too small for me. I need a wheel that holds it's position. Should be 88 keys.fect. 128 note polyphony would be the ultimate. I cacnnot save sys ex to floppy only squences so you do a dump via MIDI. Main manual too static and japanese. It needs to be more intuitive. I went through this with my VSR-880 and RS-9.
I already know what the specs are I want to know how to use/tweak it! Needs a keypad for entry. I hope this does not sound like I do not like it because I do I just want more to make it perfect. The adjustment of the Waveforms needs to be up front not way down the chain of menus.


Construction:
Roland Excels here! the board is solid and easy to clean due to finish unlike my Triton that has a weird Sandpaper Finish you would never put on anything! Built perfect but the DISK DRIVE is too Noisy. It sounds like my old Peavey DPM-4. I hate to here it jurying sequences.

What can I say If it had a quiet floppy drive and 88 keys and 128 polyphony this would be KILLER! But really it already is a great workstation in its own right. Just drive it off an 88 key board and you are there. I have been critical in the past with Roland for too basic of architecture in their products. But after I looked at this and other newer instruments I can say they are building very serous synths NOW!
Enjoy and play. This board will be hard to outgrow if this is even possible.
John Marzich

Roland Fantom FA-76
4
Very good keyboard 76 note synth with big improvements compared to XP80. It has 4 controllers with dual functions editable and the famous D-Beam. It also has 4 OUTPUT, 3 pedals, 2 digital outputs S / PDIF (optical / coaxial), 3 doses noon. There are also lots of sounds but it is the quality that predominates. Building on the sound engine of the XV 5080, 128-PATCH users, especially users of 64 against 32 for the PERF XP80, and 16 KIT Rhythm. Of course, it is GM2. The major criticism is the meager 64-voice polyphony (128 XV5080), the lack of slots for cards SRJV80 (DAC 1??) And especially the complexities of using the beast. (Why such a big screen for not being a touch ????? KORG TRITON example !!!!)

Not very easy to use. Although the functions are the same as for XP, nothing is set as the latter. Eg to switch the mode PERF PATCH must enter the MODE menu, with the arrows or PERF PATCH go and confirm with a button below the screen but not in front of the function!! Galley for live. no !!!!! regarding the editing of sounds or other effects, it's the same thing. It must have all pages and sub menus at the top of the keyboard or else ......! For the manual, it is so far only in English (I'm French) but well done.

The sounds are beautiful. Significant efforts on the drums, guitars, pianos, organs, finally, that the good and mostly beautifully highlighted by the dual arpeggiator. The effects are coming to realize most of the series of COSM. So property. The keyboard is much improved also firmer. I have been using

September 20, 2001. I tried all the models before you buy it because I'm hi-tech salesman in a music store (which is easier). I also have a Triton, a Nordlead 2, a CX3 an XP 80 and EMU B3. The price / quality ratio is faithful to ROLAND. Ie it is always the same price for all synths premium brand but it can never be too expensive! To conclude, I do not regret my choice.
Did you find this review helpful?yesno
»

jef_citron's review (This content has been automatically translated from French)

Roland Fantom FA-76
5
The quality of the keyboard is superb, laftertouch is masterful!
There are as many as lon Controller may wish (and even more than the number of our feet and our hands!)
We can TRANSFR sounds via a PC (and multitimbral and performance) of a program free ugly XV named Librarian. But you can not edit custom settings on a PC sounds.
The squenceur is excellent but it can not compete with a computer for part squenceur edition.

The manual is clear trs
Ldition sounds plutt is well organized, even if is a complex beginners ...
But the black point of this synth is lergonomie buttons faade. Indeed there are trs few buttons on the faade so we have trs often use the menu buttons located under lcran. Now they are plutt wrong place because they are so big that their position is compared DCAL laffichage of lcran (like karma! Note that default has t corrected on the Fantom S). Conclusion: even APRS OF USE months we get any further search button should be pressed

For acoustic sounds I find trs versatile but for someone it is better acqurir require an expansion card (Cher. ..)

The synth sounds are good trs (especially groundwater). This is not an analogue crmeux but he has his personality for the synthetic sounds. Especially with 8 envelopes, 8 LFOs and a modulation matrix can be obtained sophisticated FX trs

Technically the analog outputs are high quality dune trs trs (there is also an optical output).

By spending time programming new sounds you get CRER insouponnes sounds. Obviously EST quavec a less intuitive synth with lots of knobs in faade but it lhabitude connate menus by heart! ! !)

Note: potentiomtres faade to have a resolution of 8 bits (0127) so when handling the filter (low pass, for example) means a staircase effect (especially when rsonnance is raised) (note: there is no staircase effect that during the variation of the filter with envelope or LFO)

Here&#39;s a video on how dmo "performance" of the Fantom:
Video ( http://mach12.perso.neuf.fr/perso/ultra_arpege.wmv )

The solid is really good trs, over the large keyboard is an excellent quality of manufacture (synthesis touch) for someone who wants to make scne I think it is very s well
Studio for use midi polyphony of 64 voices can be disabling (with a direct to disk, we can try to circumvent the problem by boun ... but it is a bit cumber ...).

Despite its faade Austre and cold that could give limpression bote of a large void that is a synth that has a potential standard (but somewhat complicated to beginners so apprhender there paramtres possible)
Only one issue: spending time tame bte!

Adding the 4 August 2006: all that is above a crit t long before I shall decide to sell my Fantom.
Adding the four fvrier 2007: I have my Fantom and currently j&#39;coute what is the best in software samplers must reconnatre the sounds of piano and electric organ of the Fantom taient really good (thanks, among other effects embedded). This is not to say that one day I n&#39;achte not another workstation (as with a lot of software on computer ... music and a lot less!)
Added July 9, 2007: I sold my FA76 650 euros in a perfect state. Sincrement that price is a bargain trs if sampling is not a priority for you and in addition you want a good keyboard "lightweight" (in the sense of the term). Today I regret it so much my Fantom sr I&#39;ll buy myself a new workstation because I&#39;m tired of wasting my time with the computer and all its other paramtrages: I never do so little music since I just hardware that revolves around a PC. Notice if you want to do all the production, IT is almost mandatory if you plutt your musician (what fun to play) plutt to choose a musical instrument and not a PC