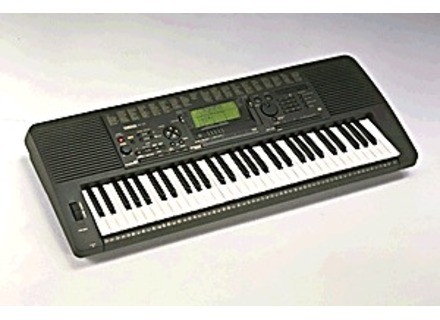 PSR-520, Keyboard Arranger from Yamaha in the PSR series.

will be handled to juggle modes settings. but after some time it will.
manual in 4 languages ​​(including French) clear and everything is indicated
not attempt to modify the effects of sounds. this is not a synth.

The only trick is not too easy to play midi. The channels are not easy nor quick and intuitive to configure. but we eventually get there. Without it considering what I actually I have put 10 to this section.

my first arranger bought used there 10 to the date of this notice.

Price € 200 for it 10 years ago (see the date of the notice I tell you), there was not expected that I then had no keyboard or even with GM sounds "modern" picture. The organ is some jazzy music more than the factory SY77 (in contrast with the latter since I have a wide range of organs a nice effect (thank you kiki keyboards) and inexpensive resource systems).

Quite easy to grip. Allows you to quickly support for fun in all circumstances. Light enough it is easily transportable. I even imagined for staging a bit special from him stick two clips guitar that can wear shoulder. Yeah this is not expected to play Campanella but on 2 or 3 things a bit crazy band mates we fed well provided you do not take the foot in the cords in this case at least put the batteries if if it can! But here it is better rechargeable batteries and have more reserve in a bag to hold the next night. The best I have found and "powercuvbe" from Lidl cheap. It's a bit heavy to carry more but it takes a while. And then just connect lots of other stuff on it. (I know there's been a little independent station to play in the subway. But not).

It has been much better since. But the price has nothing to do either. Especially now that if I revendais would be of the order of € 50 for the principle. So for sound, in general they are quite correct. Ben eh! Y must not ask too much either. If we simply embedded amp ok for a small room, especially after the second barley juice distilled (alcohol abuse is dangerous for your health consume and enjoy in moderation only one who drives. not wood). Oh well sounds you plug an amp behind and with a good guitar or those who accompany you good times you pass. My motto: "before criticizing the stuff I look at first how is used one before." And me it suits me. When I'm with nobody speak ill of my keyboard!

I did not choose this keyboard especially there, in not seeking a specially either: there was an ad not far from me. I tried it. And hop. Impulse buying in short. However, I knew I would have some small cattle in which it could very well do the trick. That was the case, it still is and probably will. Clearly I'm not afraid to move it there and left alone my lower back when I ride. I do not regret. It has inspired me to be better. (There is also much better .... but now for the price huh?)
The keyboard is not too pro, a little plastoc and without "aftertouch." At home I use it now rather midi keyboard sounds to attack another music box. But as soon as ti be a tool to help a little room somewhere, I prevail or lend readily and basta.

Notes in fact there are several:
Ok for use alone or with another group or to troubleshoot
Enough to use as a master keyboard and remove the tube summer
Zero for those who expect to find the arranger of the century in 2013
Perfect for fun and unpretentious good laugh between zicos. we remember the chug and beef not keyboard ........... but when they said to me.?? "hey what are you doing Saturday you come to the point you bring your keyboard eh ben , I think it is earned.

Good music at all.