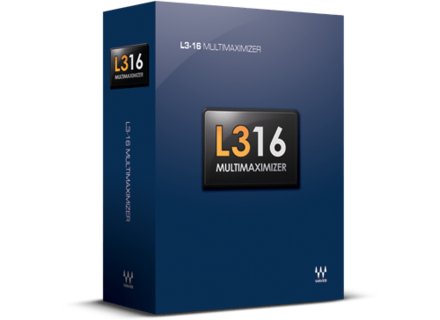 Waves L3-16 Multimaximizer
5
The L3-L16 is a 16 band limiter with EQ, and Maximization. It will give a very warm tone, or any type of tone you would want from warm to cool. It is an all in one mastering VST that can be used in a bunch of different DAW’s and programs. Waves allows you to try this plug in before you decide to purchase it. The L3-L 16 is a very powerful tool. It has everything you need to not mix, but to master your recordings. You will need the manual if you want to do things the right way and get the exact sort of a tone you are looking for on your complete finalized track. The manual is easy to use and to understand. All of the main functions are easy to use you will just need the manual to understand how to use them and locate them.

I ran L3-L16 on my Apple Macbook Pro 2.66 Ghz i7 Dual Core 4GB laptop and it worked great, it does take a little more time to install than most of the other Waves plug ins did on my computer. I have not tried to use the L3-L16 on my PC because I hardly every “master” on my PC. The L3-L16 was very stable on my Mac and has never gave me any issues or errors and has not crashed once. I have been using it for around 10 months now and I have got way more than my money’s worth. I have really learned some new mastering techniques with this VST and I use it to help me dictate the mood of the whole track by making it warmer or cooler.

The L3-L16 is a full mastering program, if you have a little knowledge with mixing then it is time to start learning how to master your own songs. I didn’t want to have to send my stuff off to get mastered anymore and pay twice the amount of this software just to get a few masters done. I wanted to learn to do it myself and the L3-L16 has really helped me. I am happy with my purchased and I would do the same purchase again if I needed to. The quality is amazing now!

Waves L3-16 Multimaximizer
5
The L3 was a revolution when it came to limiters. It had tons and tons of features that most other limiters didn't have. Even today, some limiters don't have what the L3 can do. However, to always remain ahead of technology, Waves released yet another L3 version, and this time, it's CRAZY versatile. The thing features an intuitive paragraphic interface with a built-in linear phase equalizer, automatic release control, increased digital resolution with double precision bit requantization, complex dithering, linear phase filtering, free of phase distortion, up to 24 bit/96KHz resolution and whatnot. Basically, it means that this thing is awesome. To use this, simply enable it on your master buss and start going from there. It's very complex, so I recommend reading the manual. Waves is generally pretty good about this, but I find messing with settings is the best way to figure out how everything works.

This plugin takes a bit more memory and processing power than some of the other limiters out there. I'm sure it'll run on older machines, but it's just something to be wary about. These plugins are rock solid, though. I've never experienced a single issue or crash directly related to a Waves plugin, and considering how important it is for music production, that's a huge plus. I'm a big fan of the fact that these Waves plugins are cross platform compatible. That means that they can be used on nearly any OS. I'm a Mac OS X user who uses Logic Pro, so that's definitely something I always have to keep in mind. There is one issue, however. This plugin is a 32 bit plugin, and that means my DAW needs to enable a special bridge to utilize this inside of my 64 bit DAW. It's not a huge deal, but I hope they fix that later on.

The L3-16 is probably the king of limiters. It can do everything and then some. There are so many features packed into this that even after months of messing with it, I'm still finding new things about it that help make a mix louder, clearer, punchier and overall better. It'll take some time to truly learn it, so be sure to set some spare time aside and fully learn how all these functions work. It'll benefit you in the long run.
Did you find this review helpful?yesno
»

Waves L3-16 Multimaximizer
5
The Waves L3-16 is a multi-maximizer multi-band plug-in for maximizing the volume on your mixes. The plug-in comes individually but also as part of a few different bundles. I believe also included with the L3-16 is the original L3, but I'm not totally sure on how it works if you buy it as an individual. Installing the plug-in should be as easy as following the instructions that will come up on the screen, although I don't have this at home so I haven't installed it myself ever. The configuration of the plug-in is pretty user friendly, splitting it up into five separate bands to work with. Each band has gain, frequency, and Q parameters, while there are also main controls for setting the threshold and output ceiling. There are also options for bit quantization, dither, noise shaping, separation, and release character. Lastly, there's a nifty graph and a release parameters as well. I think most users will find that this is easy to get the hang of and won't be reaching for the manual.

We're running the Waves L3-16 on a few systems at the studio where I work. This is a rather new plug-in so we don't have them on all the systems yet, but our two main rooms have it. I've mostly been trying it out in our C room, which is Pro Tools HD (like the others) and has an Apple G5 Power PC computer with 8.5 GB of RAM and dual 2.3 Ghz processor. I've also used it a bit in our A room, but either way it's enough to run the plug-in more than comfortably. When factoring in performance, also take into account that most will probably be using it for mastering and only need a single instance of it at a time.

The Waves L3-16 is the most in depth and advanced version of Waves' ever popular series of loudness maximizers. I have to say that it's also my favorite to use for the most part. If I'm just looking to get a quick level I'll probably stick with the standard L3, but for serious home mastering jobs or for more in depth control, the L3-16 is going to be the way to go. As always with Waves plug-ins, this has an incredible sound for a plug and will add you a ton of volume to your mixes in the end. I know a lot of home studio users have issues getting their mixes loud enough; the Waves L3-16 is a huge step in the right direction in helping this!
Did you find this review helpful?yesno
»