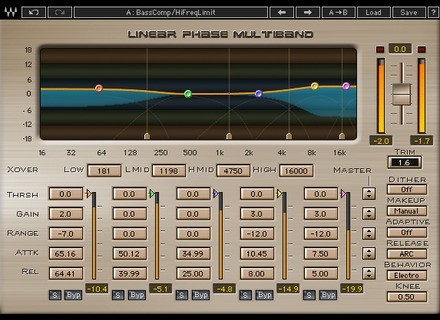 Waves Linear Phase Multiband Compressor
5
The Waves Ltd. Linear Phase Multiband Compressor is a software plug-in found in numerous Waves plug-in bundles and available individually. I installed this along with the complete bundle of Waves plug-ins, and I imagine that most will be installing it within a bundle, which shouldn't be a hard process. Just follow the step by step instructions like you would for installing any software. The plug-in's interface isn't convoluted as they make it as easy as possible to use everything going on here. The compressor is split into five separate bands, each with their own parameters for threshold, gain, range, attack, and release. You set the crossover frequency between each of the bands to determine where each band is defined. It also has dither, and a variety of other little features to be aware of. It's user friendly enough where I don't believe a manual is necessary.

I've used the Waves Ltd. Linear Phase Multiband Compressor on both my system at home and the ones at the studio where I work. Mostly I'm using it at home, but I do a lot of going back and forth between the two systems, so there is a good amount of crossover. My home system is Pro Tools 9 (Native) based that I run with a Digi 002R audio interface and on a Mac Book Pro laptop with 4 GB of RAM and a 2.2 Ghz Intel Core 2 Duo processor. At the studio we have a number of systems, all Pro Tools HD based. In either case, I can't say that I've encountered any issues related to the performance of the plug-in.

The Waves Ltd. Linear Phase Multiband Compressor plug-in is a great one to have in any DAW. While a multiband compressor isn't always necessary, it's definitely a nice tool to have as it can be very helpful be able to compressor separate frequency bands. It's useful for applications of all kinds, namely for vocals, drums, and really across the board in some situations. It has a clean and professional sound, much like many of the Waves plug-ins of this type. I don't know if it's going to be worth it for most users to buy this individually, but those who have a Waves bundle will most likely have this. So if you do it's definitely a tool you should take advantage of and if you don't have it already, this or something like it is definitely worth looking into.
Did you find this review helpful?yesno
»

Published on 05/09/16
Todday only, Waves offers its Linear Phase EQ at a special price with an additional, free Linear Phase Multiband Compressor licence.