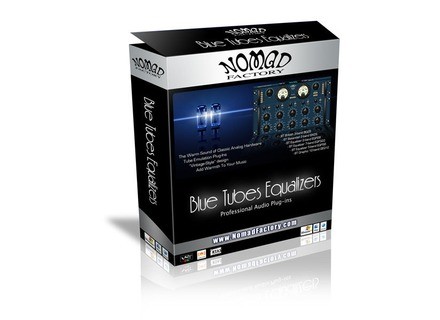 Nomad Factory Blue Tubes Equalizers
4
The Nomad Factory Blue Tubes Equalizers Pack is a plug-in bundle of six individual equalizers. There are EQ's of all different types in this pack, having both graphic and parametric EQ's and both simple and in depth EQ's. I'm not an owner of this plug-in bundle as I've only used it at the studio where I'm working where we've got pretty much all of the Nomad Factory stuff installed. Since I don't own it and it has been installed on there for a while, I wasn't involved with installing it and don't know what the process entails, although I can assume that it's pretty easy based on installing other software. None of the plug-ins are too hard to use, with the British Tone Equalizer BQ2S, Baxandall Equalizer BX2S, Model GEQ12, Program Equalizer PEQ2B, Equalizer Model PEQ5B, and the Equalizer Model PEQ322 all being included in the bundle. Some are easier to use than others, but this just has to do with the nature of each EQ. I haven't ever seen a manual for the bundle or any of the plug-ins in it...

The studio is running the Nomad Factory Blue Tubes Equalizers Pack on a number of different systems, since we have a good number of them on site. Our main room is running it on a MacPro computer with 10 GB of RAM and dual 2.66 Ghz Intel Xeon processor, along with Pro Tools HD which is the case on all of the systems. There's not much more that than to say as all of our Pro Tools HD systems are more than capable of running these plug-ins without hiccups.

The Nomad Factory Blue Tubes Equalizers Pack is a nice little bundle to have running in any DAW. It's not ground breaking by any means, but they give you a nice array of different types of EQ's in here, and saying it was on the cheap would be an understatement. The price per plug-in is pretty ridiculous since you're getting six in one here. Again, the plug-ins aren't the best sounding EQ's out there, but they'll get the job more times than not and for the price they can't be beat. The Nomad Factory Blue Tubes Equalizers Pack is the perfect way for the home studio owner (or professional) looking to add six quality EQ plug-ins for the price of one in the case of many plug-ins.