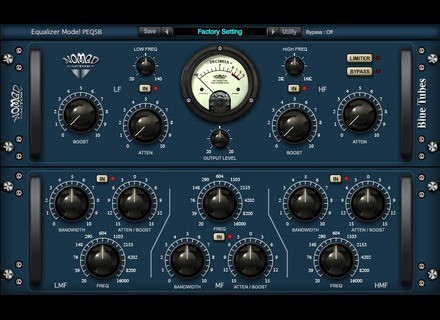 Nomad Factory Equalizer Model PEQ5B
4
The Nomad Factory Equalizer Model PEQ5B is a plug-in that is offered as part of the Blue Tubes Equalizer Pack and as an individual plug-in. I don’t own this plug-in bundle but the studio I work at does and I’ve used it there. For this reason I didn’t have anything to do with installing the software. In terms of learning to use the plug-in, it’s fairly simple and I think that anyone with a small amount of experience using EQ should be able to figure out how to use the plug-in without any assistance from a manual or elsewhere. The plug-ins interface is loosely based on the Pultec configuration, but it’s got more control. The top of the plug-in features two EQ bands for high and low frequencies, each with their own boost and attenuation knobs and vague frequency control as well. There’s a built in limiter with a button only for light limiting and an overall output leveler as well. The bottom half of the plug has three more bands for low mids, mids, and high mids, each with parameters for bandwidth, gain (attenuation/boost), and frequency. With all of the bands you can choose to bypass them if you’d like…

The studio where I work has just about all of the Nomad Factory plug-ins including the Blue Tubes EQ Pack which has this in it. We have all of the plug-ins running on a few different systems since we have a few studios on site, but all of them are Pro Tools HD and rarely do we have issues running any plug-ins. Our main room has a Mac Pro computer with 10 GB of RAM and dual 2.66 Ghz Intel Xeon processors. It’s not even worth going into further detail on this system as it’s more than capable of running this plug-in without issues.

It’s not worth it to buy the Nomad Factory Equalizer Model PEQ5B plug-in unless you’re doing so within the Blue Tubes Equalizer Pack. It costs about half of the price of the bundle on it’s own, which consists of six EQ plug-ins in total. This is one of my favorites in the bundle since if offers up more control than you’ll get with many of the other ones. For me, I’d rather have the option for control and worry about if I need it later. This certainly gives you enough to play around with and it has more than a respectable sound. It’s thick for a plug-in EQ and covers the full range of frequencies very well here. If you like this plug-in, the bundle is a great way to expand your EQ capabilities at an extremely reasonable price…
Did you find this review helpful?yesno
»