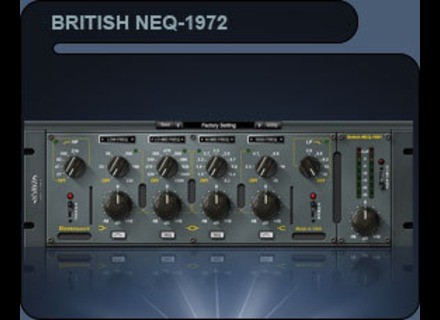 Nomad Factory British NEQ-1972
4
The Nomad Factory British NEQ-1972 is one half of the British Bundle, the other half of which is the British MCL-2269 compressor. Both are plug-in emulations of vintage gear, this one being modeled after a Neve 1081 channel strip. I don't own this bundle, but I've used both of the plug-ins in it a pretty fair amount at the studio that I'm working at. However, because of this I can't speak to the process of installation. Even if you don't have experience using a 1081 or any Neve equalizers, this is still a pretty easy semi-parametric EQ to get used to. It's a four band EQ that also has high and low pass filters on either end. Each of the four main bands have parameters for gain and frequency selection, each having a number of different frequencies to choose from. The high and low pass filters each have five frequencies to choose from and the bands also have Q buttons. Lastly, there is a phase switch and an overall output leveler included in the plug-in's interface. I haven't seen the manual for this plug-in.

The rig that I've used the Nomad Factory British NEQ-1972 has primarily been in our studio's A room, as we have a number of studios on site. This room, like the others, is Pro Tools HD based. The computer that I've been running the plug-in on is a Mac Pro that has 10 GB of RAM and dual 2.66 Ghz Intel Xeon processors. I've never encountered the slightest performance problem with this plug-in within this configuration, as it's very powerful and not really a great judge on how well a plug-in will run on your average system.

I've been finding the Nomad Factory British NEQ-1972 to be quite a useful plug-in as of late. It's very easy to use and gives you enough control where you can virtually get any EQ job done. I don't know if this is a really 'British' sound, but it certainly sounds pretty darn good. I've used it across the board for in depth equalization and I think it works pretty well for a variety of applications, namely vocals, acoustic guitar, and even on a drum bus. It's powerful in what it can do since it's got a lot going on. The Nomad British Bundle is absolutely one worth looking into as a cheap enough deal for an EQ and compressor as it will give you a whole lot to work with between the two...
Did you find this review helpful?yesno
»